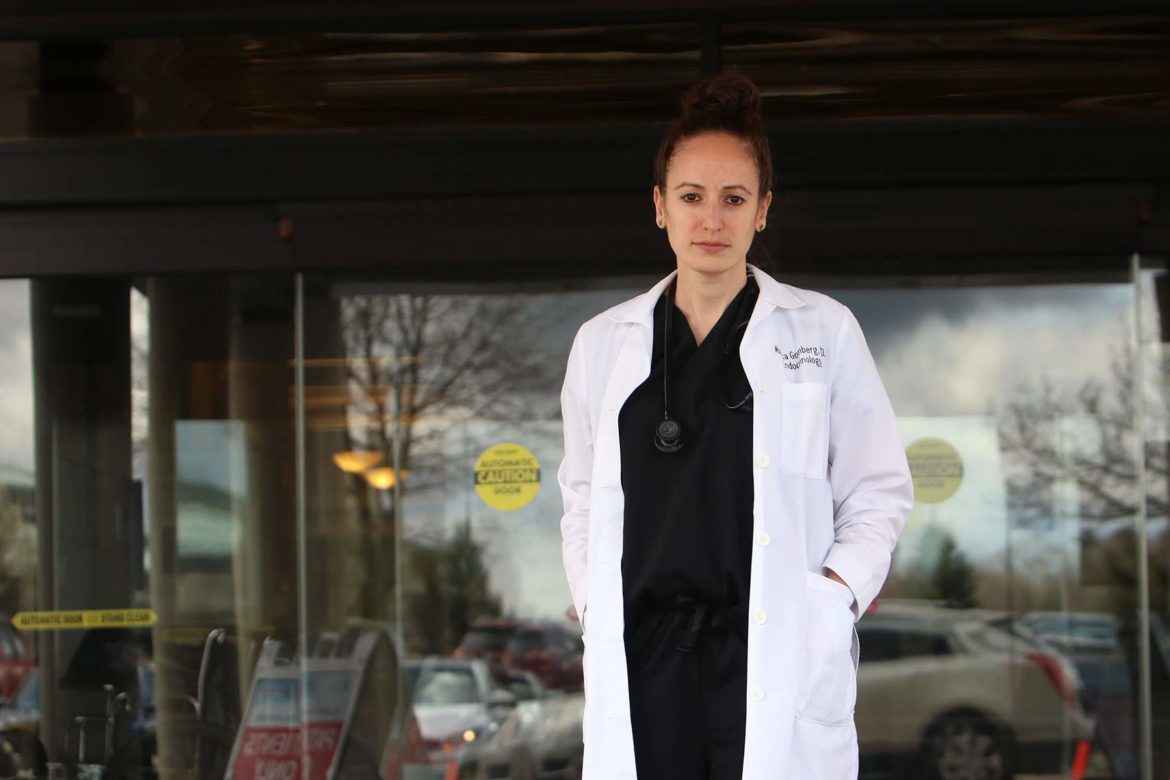 Endocrinologist Dr. Monica Gomberg has seen a decline in patients in her private practice since the COVID-19 outbreak began in the U.S. (Photo by Kimberly Rowen/PublicSource)

Gov. Tom Wolf and large hospital networks like UPMC and Allegheny Health Network have begun to take steps to increase the capacity of the healthcare system to fight COVID-19 in Pennsylvania. But Allegheny County’s small and medium-sized independent medical practices face an existential threat, according to the stories told to regional and national associations who support these practices.

Doctors at three independent offices told PublicSource that they are considering cutting back hours and staff — or have already done so. To comply with an order from Wolf to stop elective surgeries, some local providers have had to cut out some or all of their business. And many patients are canceling and delaying their appointments. While some patients have turned toward telemedicine, it still hasn't been enough to make up for the drop in revenue.

Independent medical practices employ around 800 doctors, that's about 10% of the doctors working in Allegheny County. They practice at approximately 300 different independent facilities, according to Jeremy Bonfini, the CEO of the Allegheny County Medical Society.

"Independent doctors, like the rest of the world, are shaking. They are shaking in their shoes and worried about the future,” said Marni Jameson Carey, the executive director of the Association of Independent Doctors.

The doctors who spoke to PublicSource said that if they can't see their patients, especially those with chronic illnesses, those patients could end up in the emergency room, taking up a bed that could go to someone with COVID-19. Some of these practices are also reporting a shortage of personal protection equipment that puts them at risk and has limited their ability to test for COVID-19.

As COVID-19 cases continued to surge in Pennsylvania, Wolf on March 28 said more than 100 retired medical professionals of all types have volunteered to come out of retirement across the state. But that increase is small compared to the number of independent medical professionals already working.

Dr. Surbhi Agarwal, one of the owners of FalconER Urgent Care in Cranberry, said that a doctor in her practice would see about 25 or 30 patients per day but that has fallen off to five or six. The center has to cut back its hours, now closing at 5 p.m. instead of 9 p.m. The office used to have five staff working at a time but is cutting back to two. That means less hours for many of the office’s 12 staff members.

Even before the current crisis, Bofini said, independent doctors were consolidating into larger systems, like UPMC and Allegheny Health Network. But he thinks COVID-19 could speed up this trend. “There are some medical practices that may close up permanently as a result of this,” he said. "Most of our small practices were struggling in the good times, and now we have many physicians close to retirement age and may decide to close up their practices entirely."

The situation could be even more dire in other parts of the country. Nationally about a third of doctors work for independent practices, according to Carey, the executive director of the Association of Independent Doctors.

She spoke to a doctor in Volusia County, Fla., who laid off one third of his staff after he had to cut elective surgeries that were either considered inessential or because patients postponed. A  cardiologist in Columbia, S.C. told her that he didn’t think his business would be open in a few months. Similar stories have been reported in Texas, Massachusetts, Arkansas, Alabama, North Carolina and across the country.

"You do the math: zero income and 100% of expenses. What are you supposed to do?” she said. “The government caused the shutdown. It told everyone to stop doing these procedures. So the government needs to come up with a solution because we can’t have all these centers dying.”

Because hospitals often charge patients a facility fee, she said the loss of small practices could leave patients with higher bills.

The federal stimulus package doesn’t specifically direct money to independent providers, Carey said, though they could be eligible for help available to small businesses through the Paycheck Protection Program. "The hospital lobby is very large and well funded, and they did a very good job of getting $100 billion to go their way, but nobody does that for [the independents],” she said.

At FalconER Urgent Care, Agarwal said staff has tried to incorporate telemedicine, but it hasn’t taken off like it has at some larger practices. So she is helping her employees with filing for unemployment insurance and hoping the telemedicine will pick up so she can offer them more hours. “Hopefully we’ll get through this together and hopefully the business is standing and we’ll rebuild on this after it’s over,” she said.

Agarwal said she is one of the few independent providers who test for COVID-19 but that she had to stop for a brief period because there wasn’t enough protective gear. She received 40 masks and gowns from the Federal Emergency Management Agency last week and was able to start testing again. But the new supply won’t last long, she said. They’ve now started washing their gowns down with Lysol and an alcohol-based disinfectant to reuse.

“I worry I’m going to get [COVID-19] and worry that I’m going to bring it home to my two kids,” she said. “And my staff is worried about that with the lack of protective equipment.” 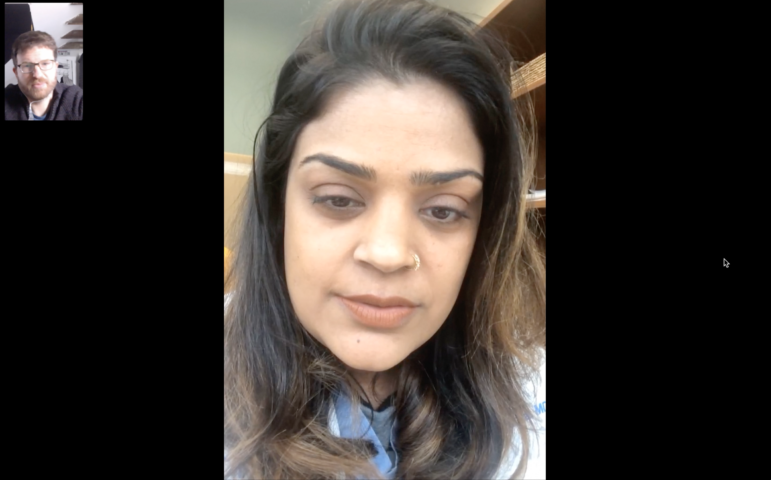 Dr. Surbhi Agarwal, a primary care doctor at FalconER Urgent Care in Cranberry, said her practice has already had to cut back hours and staff. (Screenshot by Oliver Morrison/PublicSource)

Dr. Monica Gomberg, an endocrinologist at Associates in Endocrinology in Bethel Park, said her patient load has fallen off from about 20 per day to about 10 to 12, mostly receiving services through telemedicine. That drop-off is typical for the other doctors at her four-doctor practice. The practice is still encouraging in-person visits for critical patients, like those with severe diabetes or thyroid issues.

Watch Dr. Gomberg talk about her 30-minute routine to prevent the coronavirus from entering her home

Her office is meeting daily to try to figure out how they might be able to use the federal stimulus money to avoid cutbacks, furloughs or layoffs. The federal stimulus package allocated $100 billion toward hospitals but independent practices will have to compete with every other industry to get some of the $350 billion in loans that have been allocated for small businesses.

“The future looks scary,” she said. "We’re trying to figure out what all these new federal packages coming out consist of.”

Dr. Scott Heyl is a family practice doctor with Genesis Medical Associates, which has six facilities in Pittsburgh and one in Wexford. He said his practice initially saw a steep drop-off in patients but has transitioned about 40% of them to telemedicine. Staffing changes have only been minor so far.

Heyl said that his office has enough protective equipment to last for a couple of months but isn’t sure about after that yet. "We’ve been pooling our resources,” he said. “I don’t want to make it sound like we have this fantastic stockpile but we have enough to get us through another month or two.”

He said it’s critical for local independent doctors and healthcare workers to keep working to prevent patients with chronic diseases from contributing to hospital overloads.

If a patient with severe diabetes isn’t cared for, they could end up in the emergency room where beds will be needed for COVID-19 patients, he said. "And they are in high risk groups and would risk infection.”