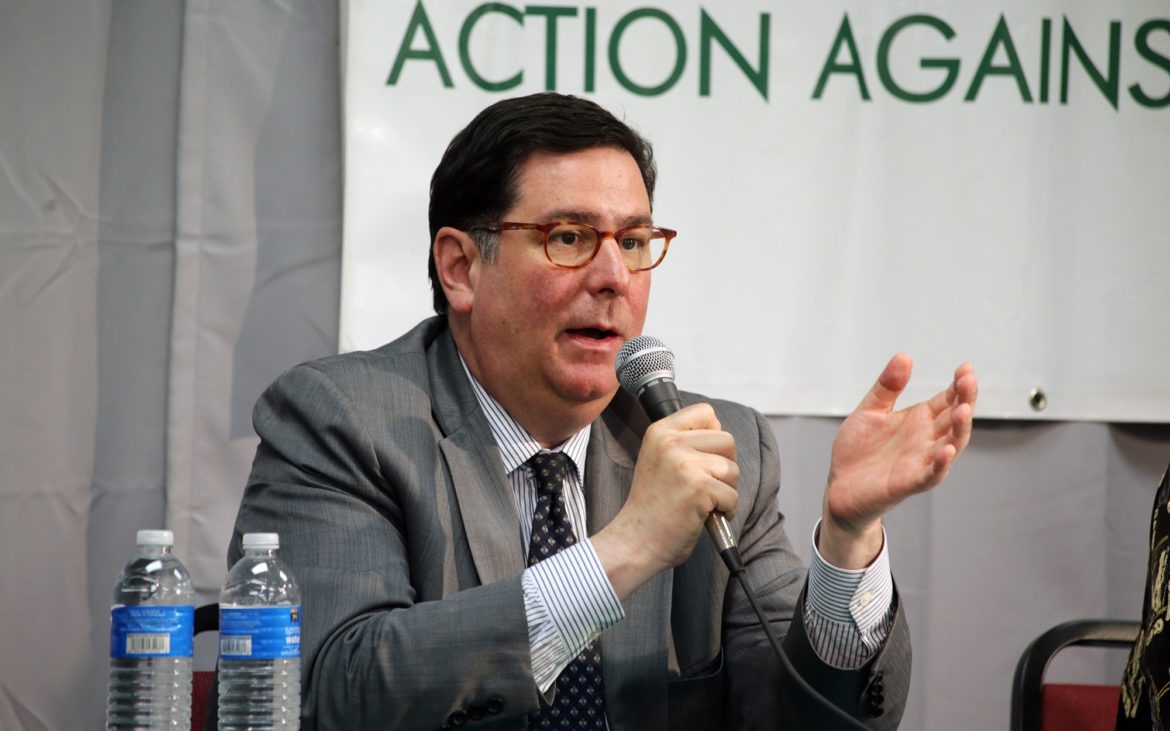 Pittsburgh Mayor Bill Peduto speaks at a mayoral debate sponsored by Just Harvest and the Pittsburgh Food Policy Council in Brookline on May 2, 2017. (Photo by Ryan Loew/PublicSource)

In what was probably the least surprising victory in recent elections, Pittsburgh Mayor William M. Peduto all but won reelection for a second term Tuesday night, defeating two opponents in the city’s Democratic primary.

Barring a successful run from a Republican challenger, which is unlikely and would be unprecedented, Peduto will continue in his job until 2022.

Like other highly partisan municipalities in Pennsylvania, Pittsburgh’s primaries serve as de-facto general elections because few, if any, candidates from opposing parties run. In Peduto’s case, he faces no Republican opponents in the formal general election in November.

(That map was created by Matt Merriman-Preston, one of Peduto's campaign consultants.)

At a celebration at the Boiler Room in Pittsburgh’s Banksville neighborhood, Peduto spoke to supporters and campaign staff shortly after his victory, saying voters had given him a “mandate” to continue his vision for the city.

“The people of Pittsburgh have spoken,” Peduto said. “[This election] is a mandate that we’re on the road to success, and we’re required to make it so that Pittsburgh stays Pittsburgh and that we build a Pittsburgh for all.”

During a roughly five-minute speech, Peduto specifically mentioned the plans underway to establish a land bank and a land trust to combat blight and establishing a citywide pre-K education program.

Early in his speech, Peduto congratulated Harris and Welch by name, saying, “It’s not easy getting in the ring.”

“For the issues they brought up, for the care and concern they had during this campaign, as well they should, congratulations on a well run campaign,” he said.

Please excuse my shaky camera, but here's @billpeduto entering his victory party a short while ago: pic.twitter.com/iQhaU4BlI9

Earlier in the day, after he voted for himself Tuesday morning at St. Bede’s Parish near the Point Breeze/Squirrel Hill border, Peduto was reluctant to be overly optimistic, a feeling he maintained until the race was called. In fact, he said he only used one hour of the day to write his victory speech. He said he was hopeful but wanted to wait until the election results were finalized before he celebrated.

“I think we’ve done a good job over the last three years plus. I think we’ve been able to show that you can change the culture of City Hall...and I think that resonates throughout the city,” he said.

A poll released by Peduto’s campaign in early March showed him winning 57 percent of the vote with about 24 percent of voters still undecided. Harris and Welch split the remaining 18 percent in that poll. (Those figures were rounded.) On Tuesday, one of Peduto’s campaign aides said a more recent poll that the campaign hadn’t released to the public showed Peduto winning a similar share of the votes. On Twitter, Peduto campaign consultant Matt Merriman-Preston, the owner of Ampersand Consulting, said he was predicting voter turnout to be about 21 percent, which he said is about 7 percent less than the last time Peduto ran. Peduto said he was hopeful overall turnout would reach about 30 percent. Around 11 p.m., that figure was much lower than projected — only about 17 percent of those registered voted on Tuesday, according to data provided by Allegheny County.

Across the county, elections officials experienced a few problems but nothing unusual of an election day, county spokesperson Amie Downs wrote in an email. In a reflection of the low turnout, Downs said the Roosevelt Arms polling place closed for a period of time after no one showed up to vote. The Judge of Elections there left the polling place for a period of time to make some phone calls, she said, meaning no one was allowed to cast a ballot.

Two other polling places, one in Pleasant Hill and one in Wilkinsburg, didn’t open on time but were up and running by mid-morning, Downs said.

As election day progressed, pockets of the city emerged as strongholds for the three candidates for mayor. In Squirrel Hill and other East End neighborhoods where Peduto voted, his campaign signs dotted front yards, occasionally joined by signs for Gilman, who represents that area and is running unopposed for reelection. Before Gilman took over four years ago, Peduto used to represent that district, which is seen as one of the most progressive sections of the city.

At the St. Bede’s Parish, Gilman joked that he felt like a student on graduation day, worrying that even though he has no challengers, his “name wouldn’t get called.”

On the North Side, though, support leaned more heavily for Harris, a longtime Pittsburgh politician and perennial thorn in Peduto’s side. Harris, who represents most of the North Side, has emerged as Peduto’s loudest critic, claiming the mayor ordered homeless people to go live in her district. While Peduto has denied the claim, Harris still commandeered the local news cycle for the better part of a week.

For at least a few voters there, Harris’ gritty, down-to-earth attitude is endearing. Sean Zack, a volunteer for the local Democratic committee, said he supports Harris because she “tells it like it is” and is “a real North Sider.”

“You know how it is with politicians, they just brush you off all the time,” said Zack, a retired boilermaker. “They do that to me. That’s how I feel.”

In Troy Hill, longtime Harris supporter Rita Steinmetz, a retired adjunct professor, said she voted for Harris because she knows how to tackle neighborhood issues and solve problems.

Jeff “Beanie” Anesin, the owner of a bar in Troy Hill, said he voted for Harris and that he faults Peduto for not getting input from the neighborhoods before moving ahead with certain projects, like bike lanes.

Back at his victory party, Peduto, drawing a contrast between himself and his challengers, said he was committed to working with individual neighborhoods and improving people’s lives across the city.

“What I’ll do is I’ll continue to listen to the people on the ground, not just those who use megaphones,” he said.

One thought on “After primary win, Bill Peduto is poised to serve a second term as Pittsburgh’s mayor”