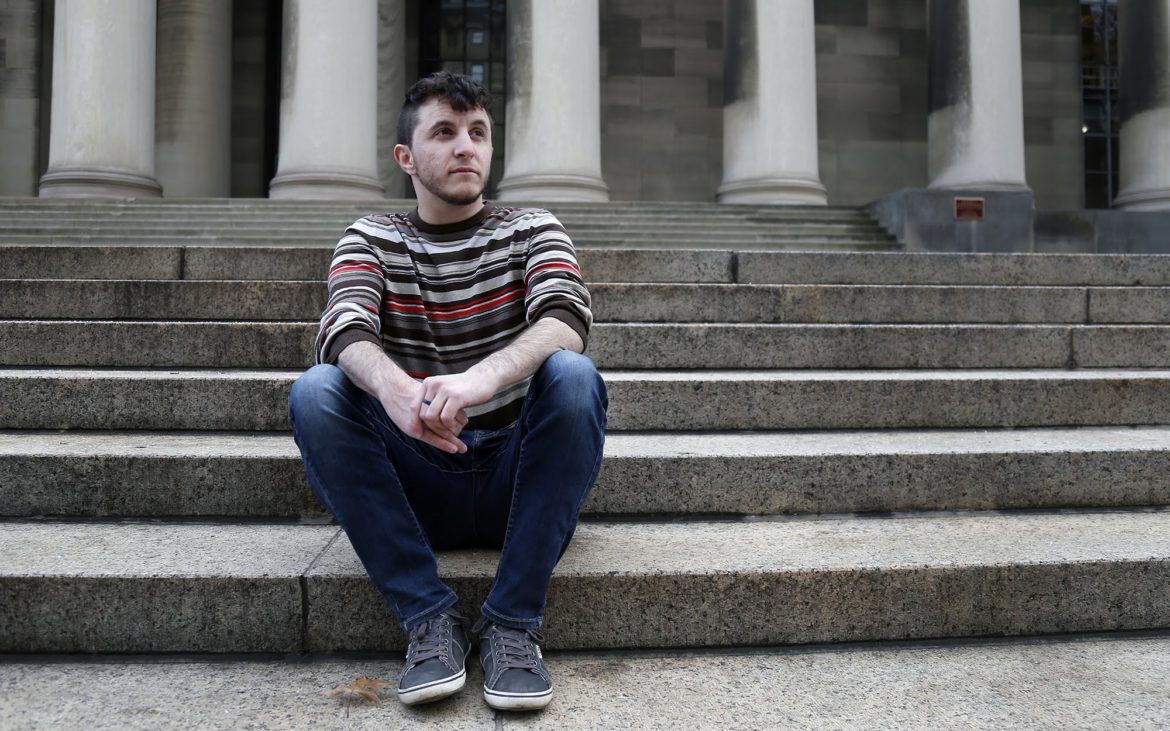 Eli Kurs-Lasky, a Pittsburgh native, learned he has autism in his mid-20s. (Photo by Ryan Loew/PublicSource)

From left to right: small fork, large fork, plates atop one another in concentric circles, knife, spoon. Much of the eating process is a learned script of repeated motions based on social interactions, spatial relationships and expectations.

I sat in a hotel room in Vermont on an unseasonably warm afternoon in September 2016 — the weekend of my cousin’s wedding — as the sound of an overworked window air-conditioning unit filled the room. I pondered how the whole idea of a rehearsal dinner strikes me as a bit odd. I was not in the wedding party; I was merely a guest who traveled from Pittsburgh, and yet I was invited to attend the rehearsal dinner, the first of many official wedding-designated events that weekend.

What was I to rehearse? I anxiously fiddled with the seams on the outer leg of my shorts as I moved through the hotel room I was sharing with my parents and one of my older brothers. I felt energy surge through my arms, as if they would’ve taken flight had I let them.

Maybe this was the answer. I was rehearsing being a version of myself that didn’t embarrass those around me. While I didn’t yet realize I was autistic — at the age of 24 — I knew that something about me diverged from most others.

While I didn’t yet realize I was autistic — at the age of 24 — I knew that something about me diverged from most others. 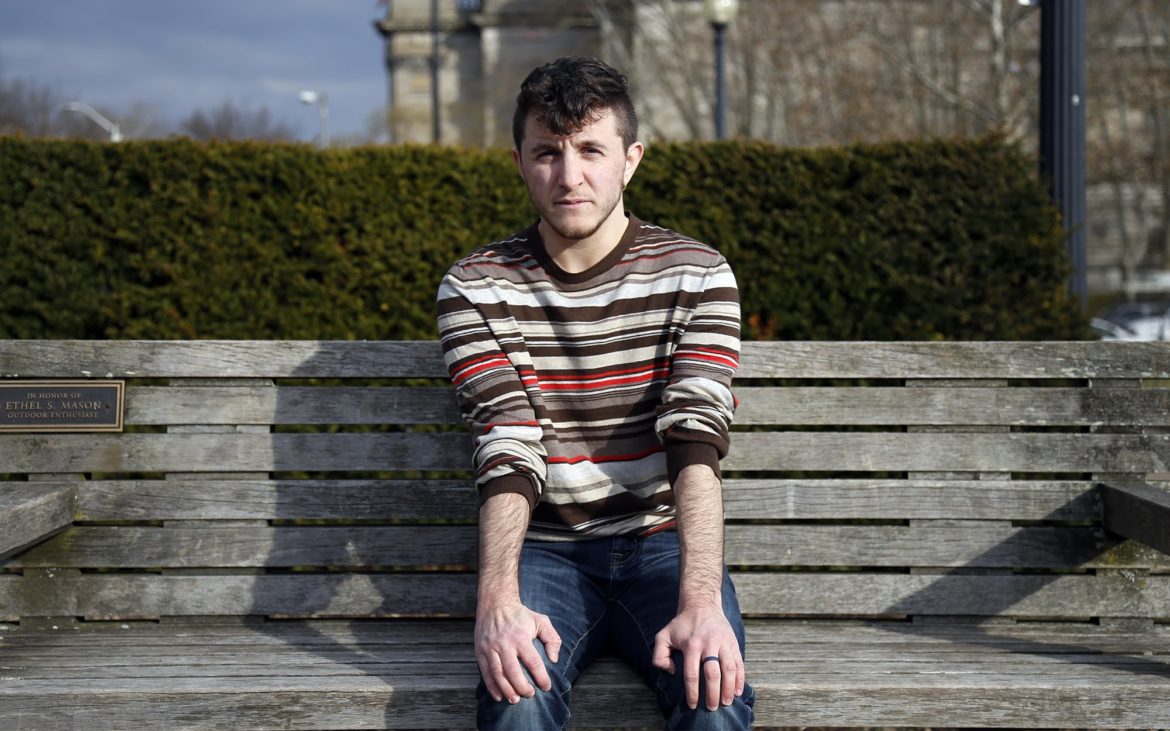 Eli Kurs-Lasky describes how his arms feel on a daily basis: "My arms were constantly in motion, as if I were conducting a never-ending orchestra. Sometimes the movements were fluid, smooth even, but other times my right arm looked as though it were climbing an invisible jungle gym, my muscles contracting and tensing in uncomfortable positions." (Photo by Ryan Loew/PublicSource)

I walked over to my suitcase where I had packed an ACE bandage, hesitated, picked it up and then put it down again. For the past couple weeks, I had been wearing the bandage on my right forearm to keep my arm still; I would wrap it from the grooves of my palm and extend it to right above the crease where my elbow bends. The bandage was not suggested to me by a medical professional, but I began to wear it when I noticed my arms moved more than other people’s.

My arms were constantly in motion, as if I were conducting a never-ending orchestra. Sometimes the movements were fluid, smooth even, but other times my right arm looked as though it were climbing an invisible jungle gym, my muscles contracting and tensing in uncomfortable positions. It was the tangible evidence of years of internalized ableism and shame.

I quickly became self-conscious of how much room my body took up when my arms were moving, fearing that it was the kinetic equivalent to raising my voice over others’ voices. My left arm was a bit stealthier in its movements, so I only ever wrapped my right one. I decided to put the bandage on at the last minute and walked downstairs to the rehearsal dinner.

I had become so used to hiding my right arm, in part spurred to do so by all the messages I received from others about what I was “supposed” to be like — think “act your age” and “pass as normal.”

At the time, I didn’t have the language to explain what was happening in my body or brain to cause this excess movement. I had never met anyone who seemed so similarly uncomfortable and pained by the way their own body moved.

One relative asked why my arm was wrapped, and I noncommittally answered that I didn’t really know what was wrong with it. It just felt weird (which was true).

The next day, I got dressed for the wedding: light blue button-down shirt, black suit jacket and a pair of dark chino pants. My gaze fell again to the bandage, this time lying unraveled atop the bed.

“Please don’t wear that. You really don’t need it,” my mom said to me.

“Put them in your pockets,” she said. It seemed like a relatively simple directive, at least initially.

We walked downstairs to the wedding ceremony, where I sat on a folding plastic chair. My fingers wanted to race like my thoughts, feeling the texture of the folds in my pants under their clammy grasp. But they didn’t.

Instead, I reminded myself: Put them in your pockets.

I don’t know how long the wedding ceremony took, and I lost count of how many times I had to remind myself to quell my arm, hand and fingers from moving. We walked to another part of the hotel property where a buffet was set up outdoors. My mouth was dry, so I poured myself some pink lemonade as I saw my uncle, the father of the bride, approaching. I didn’t know what to do with handshakes, hugs and small talk; I still don’t. As my uncle went in for a hug, my right arm jerked to the side, spilling lemonade on the cement, just barely missing my dress shoes. Hoping no one had noticed, I rushed forward to catch up with my brother walking in front of me.

I shoved my hands deeper into my pockets.

Stuffing my hands into my pockets felt like the equivalent of stubbing a toe.

I’ve heard the cliché about silence being loud, but this silence wasn’t loud or profound in any way; it was about restricting my body’s movements to the point of causing myself pain. This was the silence that garnered congratulatory remarks from the physical therapist I was seeing at the time: she had me pushing a tube sock over my arm until the compression exhausted my muscles. She told me if I put my hands in prayer position 16 times a day, the silence would fix me.

My palms were building a reservoir of sweat, and my hands needed fresh air. I uncurled my fists as I removed my hands from my pockets and looked down. I saw a few wedding guests fix their glance on my hands in a way that questioned if I belonged at their dinner table. My pants, new and oversaturated with dye, had stained my fingertips dark blue.

The rational reasoning didn’t decrease the shame. It never does. 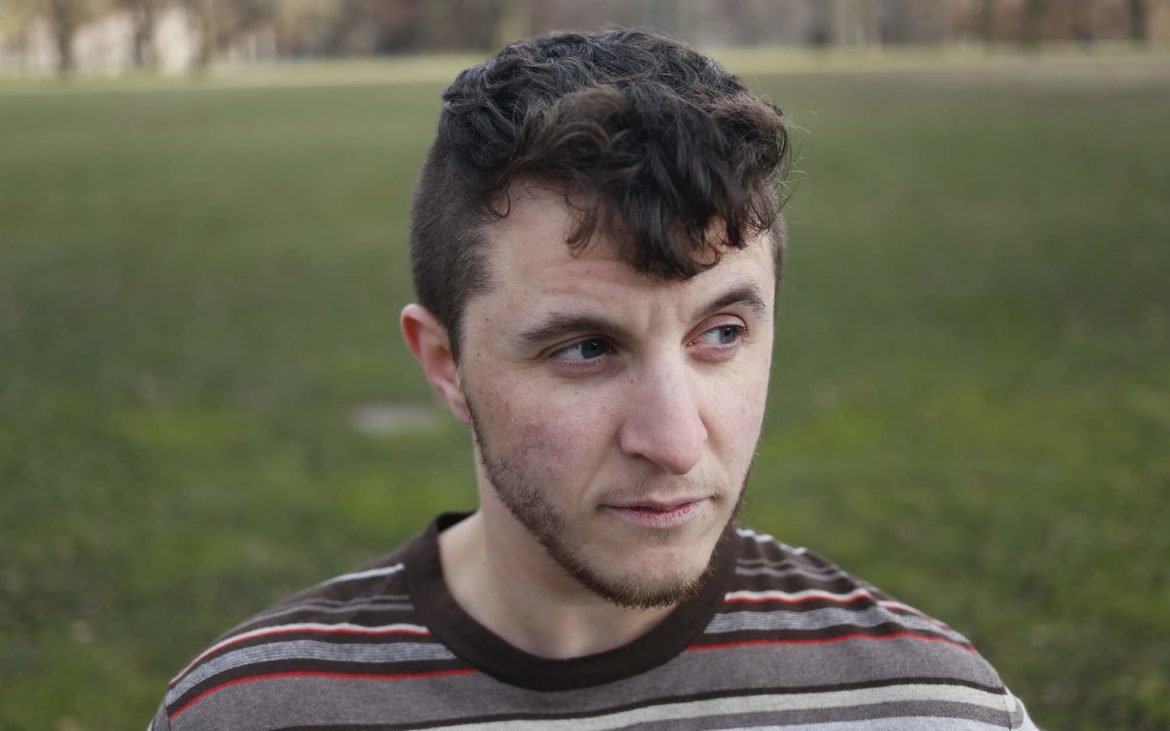 Eli Kurs-Lasky writes: "I’ve heard the cliché about silence being loud, but this silence wasn’t loud or profound in any way; it was about restricting my body’s movements to the point of causing myself pain." (Photo by Ryan Loew/PublicSource)

My hands didn’t feel like hands. My hands felt like static rushing across each ligament: I felt too much. I could feel everything.

I started balling my hands into fists because fighting seemed easier than feeling. Put them in your pockets.

A few short months after the wedding, after having gone through three ACE bandages, some medical tape and an additional wrist brace, my doctor asked me why I was covering my arm. I told her I did so because it hurt. She asked me what feeling I was trying to suppress. I considered her question but didn’t give an answer. I spent the next several months trying to become left-handed while I hid my right arm from sight. Put them in your pockets.

I spend much of my time thinking, but not talking, about my hands. I get the sense others would prefer to ignore them. Some people stare without ever speaking; others feign genuine concern just long enough for them to think it is appropriate to ask if this is early-onset Parkinson’s disease. Others know to follow my lead, and if I want to talk about it, I will.

One of my best friends, who has never been fazed by the way I move differently, calls the way my arms move “dancing.” She assures me she’d be more troubled by me hiding myself to be couth than watching my arms move to an unknown rhythm.

Nearly a year after my cousin’s wedding, I attended a dinner, this one not a rehearsal.

Not only had time passed between the first dinner and this one, but something else had also changed. I finally had an answer to my doctor’s question: what I was trying so hard to suppress was the nagging feeling of being different.

This dinner was different. I wasn’t being asked to blend in purely for the sake of upholding traditions for the comfort of those around me.

I spent the first hour-and-a-half helping with set-up and spent much of my time tapping the base of my palms onto the side of those same dark chino pants, not caring how much my arms moved. I was comforted by the fact that many of the other people in the room were also autistic. I watched as their hands, looking just like mine, moved through the air as if they were music.

No one asked me to put my hands in my pockets.

I took my glass of ice water and the plate I filled with food from the buffet back to my seat. Throughout the evening, my fingers were flitting back and forth between the balled-up napkin in my lap and the thick rim of my water glass.

No one asked me to stop moving. No one told me to put my hands in my pockets.

This time, the bandage was nowhere in sight. My hands felt like hands.

Eli Kurs-Lasky, a Pittsburgh native, experiences Pittsburgh, the city he calls home, primarily through writing, photography (self-taught) and traveling wherever his ConnectCard takes him. He can be reached at eli.kurslasky@gmail.com.