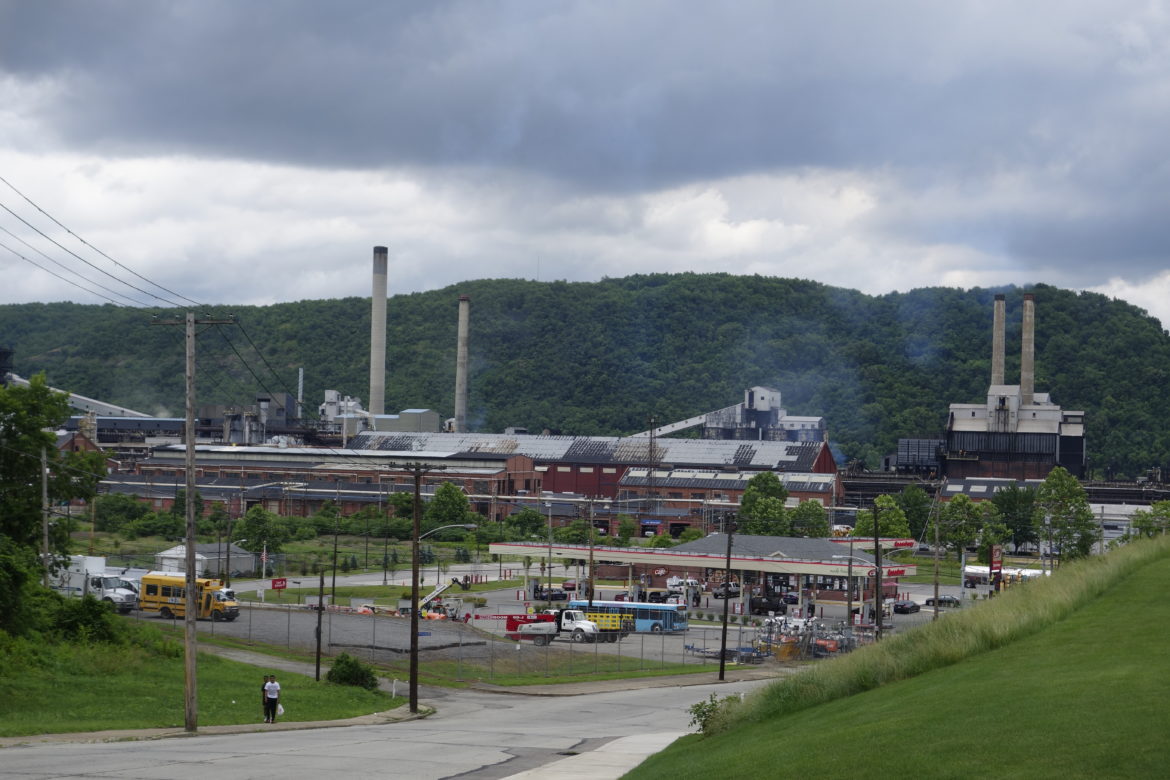 U.S. Steel's Clairton Coke Works has been a central element in the debate over air quality in Allegheny County. (Photo by Varshini Chellapilla/PublicSource)

The department considered issuing an emergency order to require U.S. Steel to take steps to reduce its emissions, email records show. Officials went as far as drafting such an order, they said. But they didn’t issue it because the company was already voluntarily taking many of the steps the county believed would keep residents safe.

What changed between the two fires?

County health officials explained Tuesday that increased pressure from residents, environmental activists and local politicians, made them realize that their December response was inadequate. They said they didn’t communicate quickly enough with the public about the health dangers.

After the second fire broke out early Monday morning, environmental activists and local officials were outraged.

“I’m very disappointed that this is happening again,” Allegheny County Executive Rich Fitzgerald said in a statement yesterday. “People in this community need assurance that the pollution control equipment is reliable and usable.”

But it wasn’t just the public outcry that caused the health department to move more quickly. In an interview Tuesday, health department officials explained that they did not take more forceful action in December because they lacked information they now know.

The pollution controls at the plant are supposed to limit how much sulfur dioxide is emitted, a gas that can make it harder to breathe and aggravate asthma symptoms that affect a disproportionate number of children in the area.

“You have to give them an opportunity to work or not. They did not. They were not very effective at all,” Dr. Karen Hacker, director of the health department, said Tuesday. “It wasn’t very helpful for people suffering from pollution at the time.”

After the Dec. 24 fire, health department officials traded emails about how to best respond.

Hacker asked that morning if the department could issue an emergency order. Kelly responded that it wouldn’t be necessary, saying the report they received was a “breakdown report.”

In an interview Tuesday morning, Hacker said her staff had prepared an emergency order that the health department could have issued to U.S. Steel. The company, she said, was ahead of them.

“We had an order prepared to go, but then U.S. Steel was implementing all of the strategies that we would have required,” she said.

In fact, the company was offering to take more measures to reduce pollution than the department thought it was allowed to ask for at the time. The company increased its coking times from an average of 18 hours to 27 hours, increased the amount of natural gas used and started flaring excess coke gas at a nearby plant that would disperse the excess pollution.

Two days after the fire Hacker asked her staff in a Dec. 26 email if there were updates about the fire and its “aftermath.” But at that time the department had not yet registered any sulfur dioxide pollution above the federal limits.

“Ok, as long as it is well below the standard we are fine,” Hacker wrote. 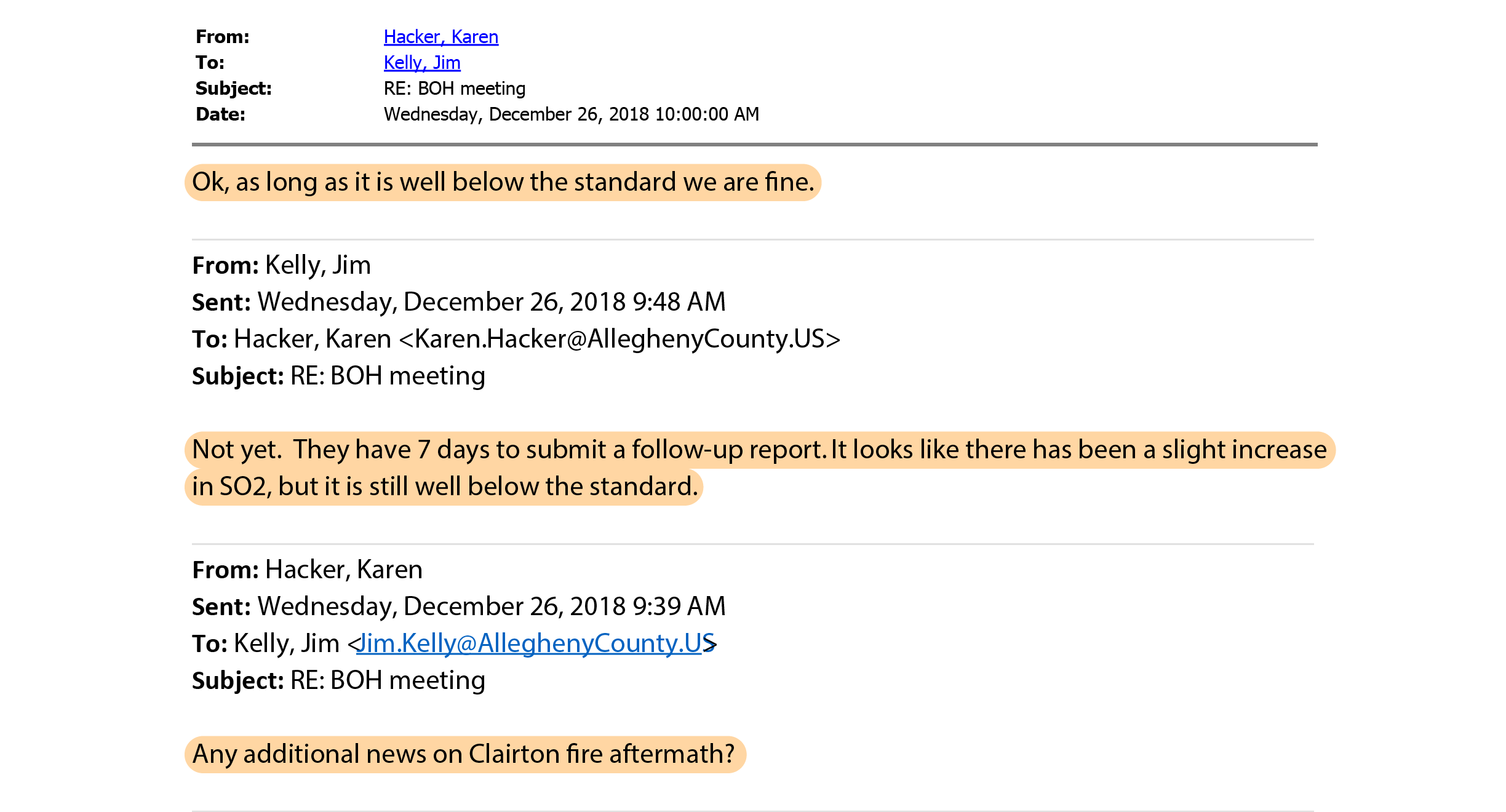 The county informed the public of pollution risks Jan. 9, after air monitors had already exceeded federal limits. Through monitoring, negotiations and legal action, the health department and U.S. Steel agreed on a strategy in mid-March that eventually stopped pollution from exceeding the pollution limits at air monitors in the region.

It wasn’t until later that the health department was able to determine that the company’s mitigation efforts weren’t enough, Hacker said.

And according to Kelly, it’s still confusing why the pollution controls the company implemented didn’t work. The county is investigating, he said.

“It doesn’t seem logical. There should’ve been a bigger reduction,” he said. “There are still some unanswered questions that we’re looking into.”

The steps U.S. Steel had been taking to protect the community after the county’s March 12 agreement seemed to be working, until the health department took a closer look at the plant’s emissions data.

Health officials said Tuesday that they’d studied emissions data from U.S. Steel and concluded that the company’s efforts to reduce pollution had been ineffective, even after the air quality monitors in the region stopped registering pollution violations. The excess pollution from the plant was being dispersed in a wider area but had not been brought under control. 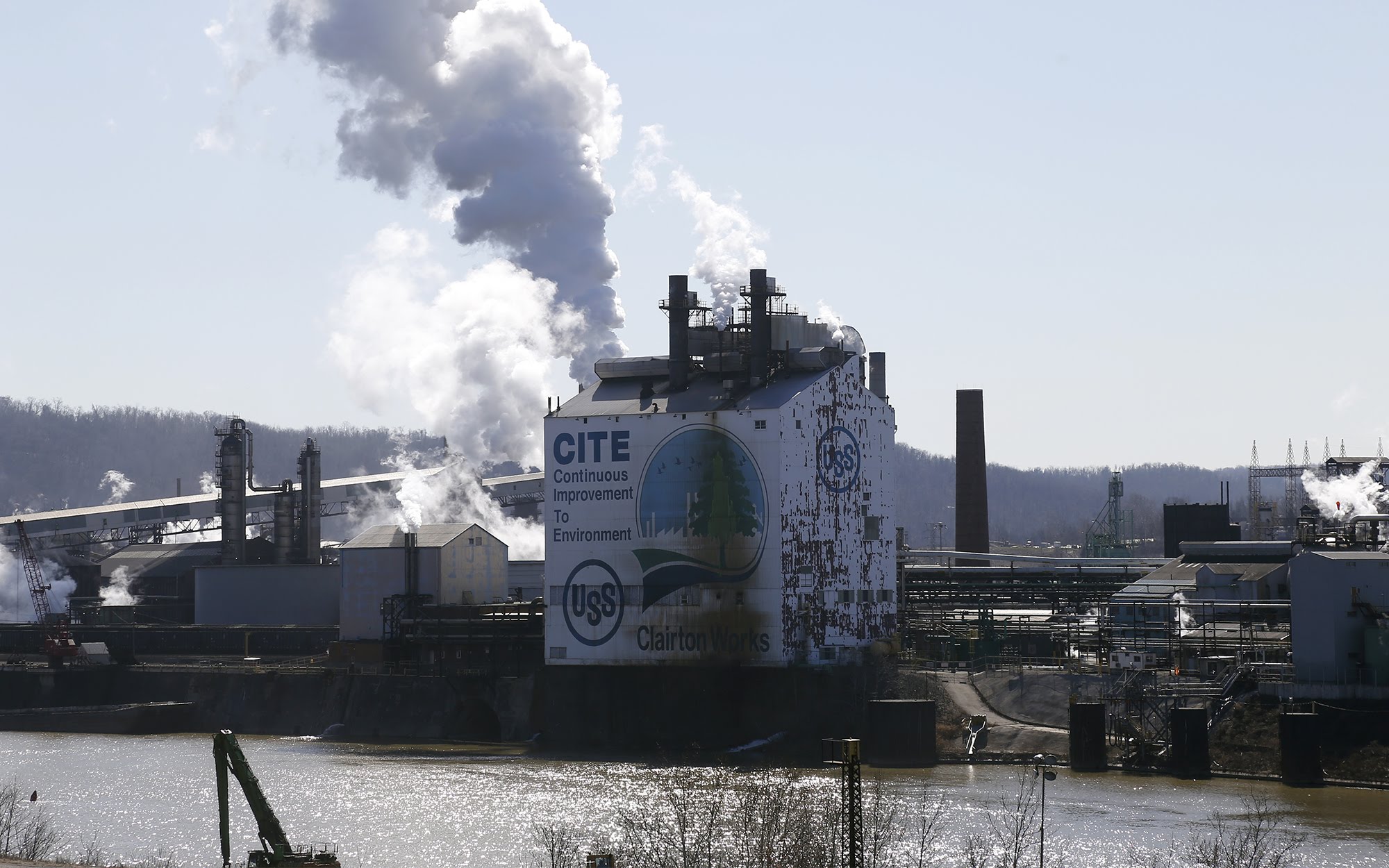 On normal days, the tall stacks at the Irvin Plant, a steel processing plant located in West Mifflin, dispersed the excess pollution at a higher altitude than locals would breathe and across a wider area that escaped detection at air quality monitors. The plant was being used to burn off excess coke gas.

But the plant was still contributing to the region’s general pollution at a much greater level than is allowed to according to U.S. Steel’s operating permits.

U.S. Steel did not make officials available for interviews and did not respond to a set of questions provided by PublicSource before publication.

And on days when cool air trapped the polluted air beneath it — known as an inversion —  the extra pollution was likely being breathed by residents. On March 28th, one of these inversions caused pollution at Clairton’s High School to exceed federal emissions standards.

How much the public was affected is unclear because the county only has a handful of air quality monitors in the area, and it’s possible that some communities near the pollution were being harmed without it being detected, Kelly said.

“Unfortunately, we don’t have monitors everywhere, so there may be impacts we aren’t measuring,” Kelly said.

When the second fire started on June 17, the county didn’t wait for U.S. Steel to propose another ineffective plan: the county demanded a plan that would work this time or shut down.

A question of legacy

The two fires in Clairton have frustrated efforts by Hacker to leave behind a legacy of increased enforcement of health violations from air pollution. Hacker steps down in July to take a job as director of the National Center for Chronic Disease Prevention and Health Promotion at the Centers for Disease Control and Prevention.

During her six-year tenure, total air pollution has decreased across the region, even as Allegheny County continues to receive F grades from the American Lung Association for ozone pollution and both daily and long term particulate pollution.

Hacker explained that when she joined the county, the department had three lawyers focused on enforcement, “one of whom was not particularly effective.”

“There was no way we could take on U.S. Steel,” she said.

Now, the department has five lawyers and are “in conversations” to hire a sixth. This extra expertise has allowed them to craft penalties that are more aggressive. Over the past 12 months, the department has issued more than $2.6 million in fines, the most it’s ever issued in a year.

Before Hacker’s tenure, Bruce Dixon served as director for two decades. Kelly described him as “averse” to taking enforcement actions. The post was briefly held by an interim director.

Hacker said that when she first started in her role, the Health Department was only receiving an average of three appeals to its enforcement actions per year, a testament to how few actions the department was taking. In recent years, though, the department has averaged about 50 appeals to its enforcement actions and has received 37 so far this year, Hacker said.

This tougher approach got results. Pollution continued to fall across the region for nearly every kind of pollution at every air monitor, according to county data. Even the air quality monitor in the Monongahela River valley, which continued to exceed federal guidelines, saw recent improvements. Last year was the cleanest year on record at the Liberty Monitor, the closest monitor to the Clairton Coke Works.

But after the fire on Dec. 24, the department drew widespread criticism for not acting quickly or aggressively enough.

And then on Monday, after a second fire unexpectedly took off Clairton’s pollution controls a second time, anger boiled.

State Rep. Summer Lee, a Democrat representing  parts Allegheny County North of Clairton, tweeted on Monday that the area is in “an environmental crisis.”

“ANOTHER fire at Clairton Coke works,” Lee tweeted. “Another incident putting health of residents in the Mon Valley at risk. Another opp to pretend it’s not that bad.”

ANOTHER fire at Clairton Coke works. Another incident putting health of residents in the Mon Valley at risk. Another opp to pretend it’s not that bad.

Mon Valley is in an environmental crisis right now! We need bold political AND labor leadership. Wonder who will stand w/me? https://t.co/Ys2QOQETwY

What the future holds

After the county’s emergency order, U.S. Steel released a statement that it fixed its pollution controls in a matter of hours.

Fitzgerald has called on U.S. Steel to implement a backup plan so that it’s pollution controls wouldn’t go offline in the case of another fire. Fitzgerald did not make a public statement about the Dec. 24 fire until after he was criticized for not doing so.

Hacker doesn’t know what that technology might be but she said the county will shut the facility down if pollution controls go offline again.

In May, U.S. Steel committed to spending $1 billion to improve the efficiency and quality of its steel and coke plants in the Mon Valley. As part of these upgrades, the company predicted that these investments will reduce its emissions between 50 and 80 percent, depending on the type of pollution.

But Kelly said U.S. Steel’s plan doesn’t address one of the biggest causes of pollution concern: The coke ovens at the plants.  “The actual operations of these batteries is not part of that plan,” Kelly said. “As air quality manager, that is my greatest concern.”

U.S. Steel has previously reduced its maintenance expenses at the plant, Kelly said. As the maintenance budget fell, he said, the county saw pollution increases. He can’t say the lack of maintenance caused the pollution or the fires — and the county isn’t able to inspect the equipment itself — but Kelly wonders if “years and years of not maintaining the facility because of cost cutting” could have contributed.

Instead of issuing fines after the fire, the health department said it was pursuing financial penalties through a lawsuit that environmental groups filed against U.S. Steel. A judge said the county could join the suit today.

Hacker said her decision to take a new job was unrelated to the controversy at the coke works. The department should not have any problems continuing to press U.S. Steel while the county looks for a replacement, she said.

But she said it is frustrating to see the two fires in Clairton undermine perceptions of the progress the department has made.

“These are the kinds of events that you can’t anticipate, and they obviously create anxiety among the public,” she said.”We have a responsibility to deal with them. Absolutely, it is frustrating to see those kinds of things happen.”

J. Dale Shoemaker is PublicSource's government and data reporter. You can reach him at 814-215-0509 or by email at dale@publicsource.org. You can follow him on Twitter at @JDale_Shoemaker. He can be reached securely via PGP: bit.ly/2ig07qL