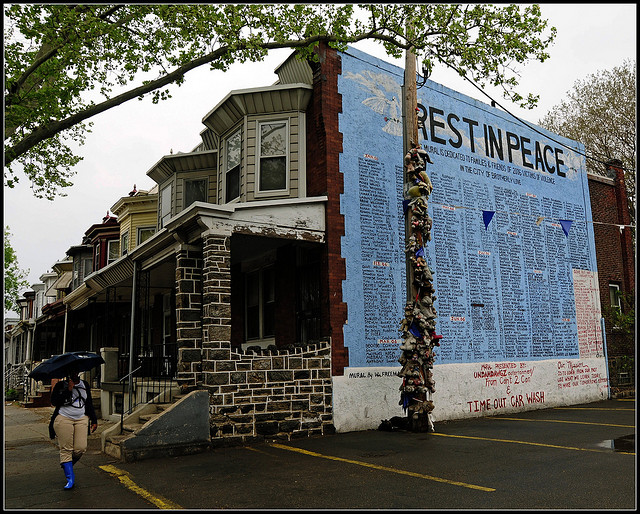 Roughly 3,500 American troops were killed during eight years of combat in Iraq, and over the same period, 3,113 people were killed on the streets of Philadelphia – a statistic mirrored by many American cities.

As ProPublica reports, victims and witnesses of gun violence often struggle with Post Traumatic Stress Disorder, though most medical systems throughout the country are ill-equipped to treat civilian patients.

Researchers say that PTSD is twice as likely to develop in women, according to the story. In children, the disorder’s symptoms can be misdiagnosed as Attention Deficit Hyperactivity Disorder, or ADHD. Many who suffer PTSD’s symptoms also have been arrested or incarcerated for violent crimes.

In Atlanta, researchers interviewed 8,000 inner-city residents, mostly African-Americans. Half of those interviewed knew someone who had been murdered, according to the story, which was co-published with Essence magazine.

While doctors are increasingly aware of PTSD among civilians, few hospitals are treating it.

Hospital trauma centers often provide adequate care for physical wounds, but do almost nothing to help patients cope with the mental and emotional aftermath of trauma. A 2014 ProPublica survey of 21 trauma centers in the nation's most violent cities found that only three — New Orleans, Detroit and Richmond — routinely screened victims of violence for the disorder. Trauma surgeons said they were aware of the burden of post-traumatic stress on their patients, but it was hard to get hospitals to spend money on new programs or staff to deal with PTSD.

The ProPublica survey included Temple University Hospital in Philadelphia. At the time of the survey, no program existed, though one was being developed.

The city isn’t blind to the problem.

Arthur C. Evans Jr., commissioner of Philadelphia’s Department of Behavioral Health and Intellectual Disability Services, has stressed the importance of treating trauma from gun violence as a public health issue, the story said.

In that effort, the city has launched a website healthymindsphilly.org to allow citizens to anonymously screen for symptoms of PTSD. Over the past eight years, city officials have met with medical and mental-health professionals, teachers and police to raise awareness of PTSD.

“We have to stop telling our kids they just have to live with this, Evans said in the story.

Police have also been taught to interact with citizens without resorting to force.

Crisis intervention training helps officers discern between someone who is being obstinate and someone who "might have some other issues that are driving the behavior," Evans says. The training also helps officers learn how to de-escalate a situation, rather than react with force.

The city also has provided training for therapists as well as faith leaders that citizens may turn to for help.

One difference between soldiers and civilians suffering from PTSD, however, is that many civilians continue to live near the site of their trauma.

The story follows Aireana, a mother in Oakland, Calif., who was shot while she was in her car with her children in the back seat. The scene of the shooting, the story said, is just blocks from where she witnessed her first drive-by shooting as a child.

"People in our community are constantly retraumatized," Nicky MacCallum, a family therapist with Youth Alive! in Oakland, told ProPublica.