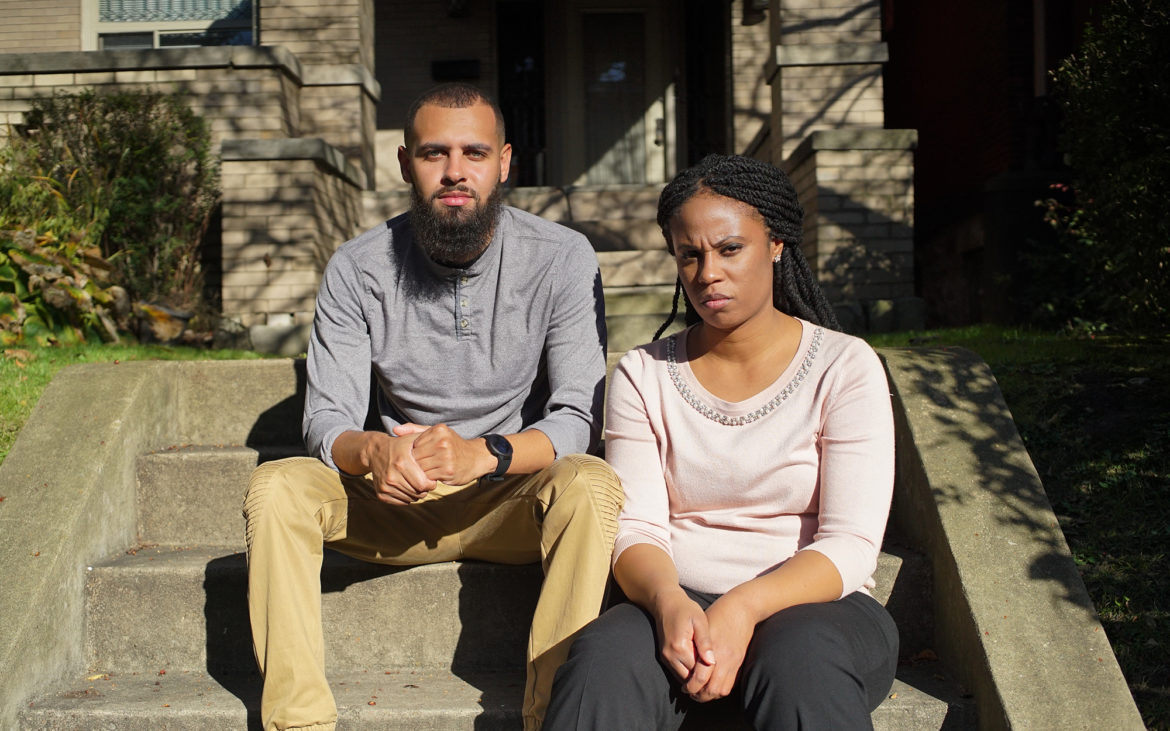 Dustin Gibson and Jamelia Morgan photographed outside their Regent Square home on Oct. 27, 2017. The couple found a black cord tied in the shape of a noose on a tree outside of their home on Oct. 24. (Photo by Ryan Loew/PublicSource)

Last week, we received a death threat in the “most livable city in America.” It hung wrapped around a tree in front of our Regent Square home, visible from where we sit every day at our dining room table. The black cord was twisted into the shape of a killing device used to publicly hang the bodies of Black people for generations in this country.

While we are deeply in tune with the experiences of being Black in America, we were not prepared for an explicit sign of our imposed position in society to be delivered to our home.

Racialized symbols — the noose, the burning cross, the Confederate flag — are meant to display hatred and have the potential to instill fear in our communities. But perhaps the most sinister harm these symbols create is the one that makes us as Americans believe that nooses and burning crosses are the only evidence that racism was indeed "here." Though painful as they may be, symbols are incorporated into the culture through a series of individual acts, perpetrated by individuals or groups who ascribe to or are complicit in upholding white supremacy, and its most recent versions.

To focus on these individual acts, to reserve outrage for these clearest forms of racial bias, puts out of range the most damaging components of race and racism and how it operates in America both historically and today. If symbols are the only things that enrage us, we risk responding to the racist symbols only and we fail to respond in the fullest, most holistic way with an approach that acknowledges the complex roots of such hatred.

Pittsburgh is home to progressively gentrified neighborhoods with more Black Lives Matter signs than actual Black people. Tax-exempt statuses and social media prominence create an illusion of unity and progress, while many nonprofits have a model of advocacy that doesn’t require interaction between the advocates and the people who they’re purportedly advocating for. This perpetuates Pittsburgh’s social hierarchy and allows for “leaders” to be selected by the people they’re chasing, rather than the people who are following, which effectively confuses the concerns of people impacted by acts of hatred and bigotry that do not appear to be explicit.

Indeed, we are not the first residents of Pittsburgh to have experienced acts of racial intimidation. We are acutely aware of it as we both work actively to dismantle forms of systemic racism and oppression — one as a Black disabled community builder who works to undo ableism and racism and the other as a civil rights attorney working to end race- and class-based mass incarceration.

We have contacted both the FBI and the Pittsburgh police to initiate an investigation. At the same time, we live with the uncertainty of the manner in which this investigation will be treated by the very police force we have critiqued publicly.  Once again, this forces us and members of our communities to question the generosity that is absent until symbols of division appear, and contemplate how (or if) we can be protected.

"... to reserve outrage for these clearest forms of racial bias puts out of range the most damaging components of race and racism and how it operates in America both historically and today." Law enforcement must approach these incidents with vigor and tenacity. Instead of capitalizing on an opportunity to garner support by making broad commitments to unity, public officials should work to undo the systems that acts of racial intimidation attempt to uphold. But it’s not just about public officials. These attempted acts of racial intimidation must concern all of us. They are evidence of racial divisions within our communities and must be rooted out like the cancerous hate they profess. So too must the other symbols of racism — systems which may not be so obvious, so jarring to the eye and human psyche. We must also work to end systems of racism as hard as we work to banish these symbols of racism and hate.

We must uproot a system of racism that has historically drawn redlines to prevent people of color from purchasing homes in livable areas and, today, forces low-income people of color out of their homes and communities, such as East Liberty, in the name of economic development.

We must uproot a system of racism that results in the disinvestment in public schools in areas such as the Hill District. The same system that disproportionately criminalizes Black students through the overuse of school suspensions and expulsions, creating a pipeline that funnels students, many of whom have disabilities, into jails and prisons.

"These attempted acts of racial intimidation ... are evidence of racial divisions within our communities and must be rooted out like the cancerous hate they profess."

We must uproot the system of racism pervading our legal system. We must recognize that communities of color are simultaneously overpoliced and underprotected. People of color are disproportionately more likely to be killed or injured in police interactions, are overrepresented in Allegheny County jail, and encounter racial profiling at every level of the legal system. We must work to improve police and community relations to ensure mutual respect and justice.

We must uproot the system of environmental racism physically rooted in land stolen from indigenous people and puts Black homes and low-income residents closer to lead-ridden water pipes and polluted air. We must recognize that the same environmental harms that inflict their communities will eventually result in the environmental degradation of our own.

Finally, we must recognize that the symbols of hate are only as effective as the systems that support them. Though what they represent may endure, their power and purpose are weakened by the resolve of communities who stand not only against these symbols but also the systems that sustain them.

Over the last few days, we have been overwhelmed and encouraged by the show of support and solidarity we have received by our friends, neighbors and fellow Pittsburgh residents. We are grateful to be surrounded by a community that is ready and willing to stand with us against hate.

We call on everyone to stand not only against these hateful symbols, but to stand up together with those who continue to fight tirelessly to ensure justice and equity for all Pittsburgh residents.

Jamelia Morgan is a staff attorney at the Abolitionist Law Center. She can be reached at jamelianatasha@gmail.com.

Dustin Gibson is the co-founder of Disability Advocates for Rights and Transition. He can be reached at dustinpgibson@gmail.com.