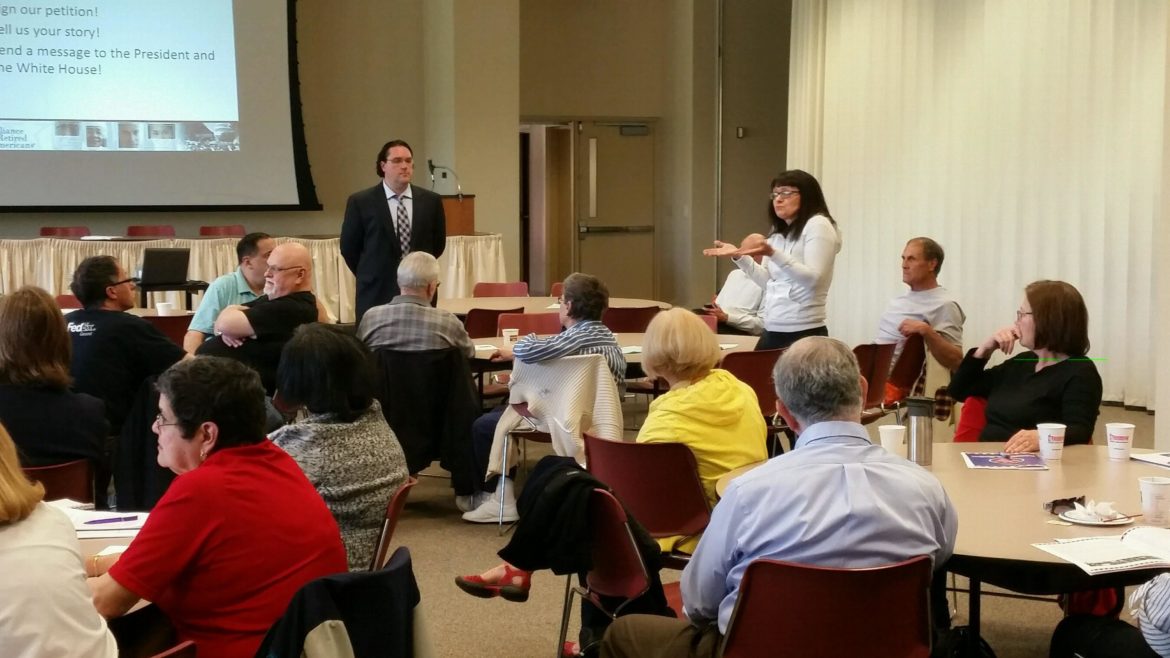 Jim Centner is one year, seven months and 21 days from retiring, and he’s scared.

“I’m looking forward to doing that and I want to do it as a healthy American, but I also want to do it with financial security, to know I can sustain a decent quality of life,” he told a group of about 60 other senior Pennsylvanians Wednesday morning.

The Pennsylvania Alliance for Retired Americans gathered local retirees and advocates at the Pittsburgh Federation of Teachers building in the South Side to discuss the decline of pensions in the country and the looming crisis of Social Security and Medicare.

The alliance collected signatures for a petition calling for those programs to be strengthened and will forward their suggestions to the White House, which is holding regional conferences on aging.

Wayne Burton, president of the Pennsylvania Alliance for Retired Americans, started the meeting by referring to the organization’s push to have everyone, regardless of income, pay a flat rate of 6.2 percent of income to Social Security.

“Scrap the cap,” he said. “Pay a little more by the people at the top, and Social Security is fine.”

The maximum amount of taxable earnings for Social Security is $118,500 or more. Some would argue that losing the cap is unfair because there’s a limit on the benefit payout and those who pay more in wouldn’t necessarily get more.

But Adam Swope, a field organizer for the Alliance, said that getting rid of that cap could push the insolvency date of Social Security and the Social Security Trust Fund into the unforeseeable future.

“In 2020, the Baby Boomers will be so large that  the amount of money coming in from workers won’t quite cover what Social Security owes in benefits,” Swope said. “Then they’ll use the trust fund, and it will only take 13 years for them to run out of bonds to do that.”

According to research by the alliance, more than half of U.S. workers do not have employer-sponsored retirement. Fewer than half of today’s workers will be able to maintain their standard of living in retirement.

If that seems bad, Swope said his generation — Generation X (now ages 34-54) — and the Millennial Generation (now ages 18-34) are in even worse shape. Most figure these programs won’t even be around for them when they retire, and because of that, they don’t get engaged in advocacy and voting around these programs.

“It could turn out to be a self-fulfilling prophecy . … That’s bad for retirees and it’s bad for our future economy, the economy your grandchildren will be growing up in,” Swope told the group, nearly all who identified as having pensions and receiving Social Security and Medicare benefits.

Alliance research shows that in 1979, 38 percent of private sector workers had a defined benefit pension; today only 14 percent have a pension, and the decline is expected to continue.

“There’s a disconnect between Congress and the majority of people who want better Medicare and Social Security,” he said. “I think the future lies with creating an alternative political movement that will build the consciousness of what people really want.”