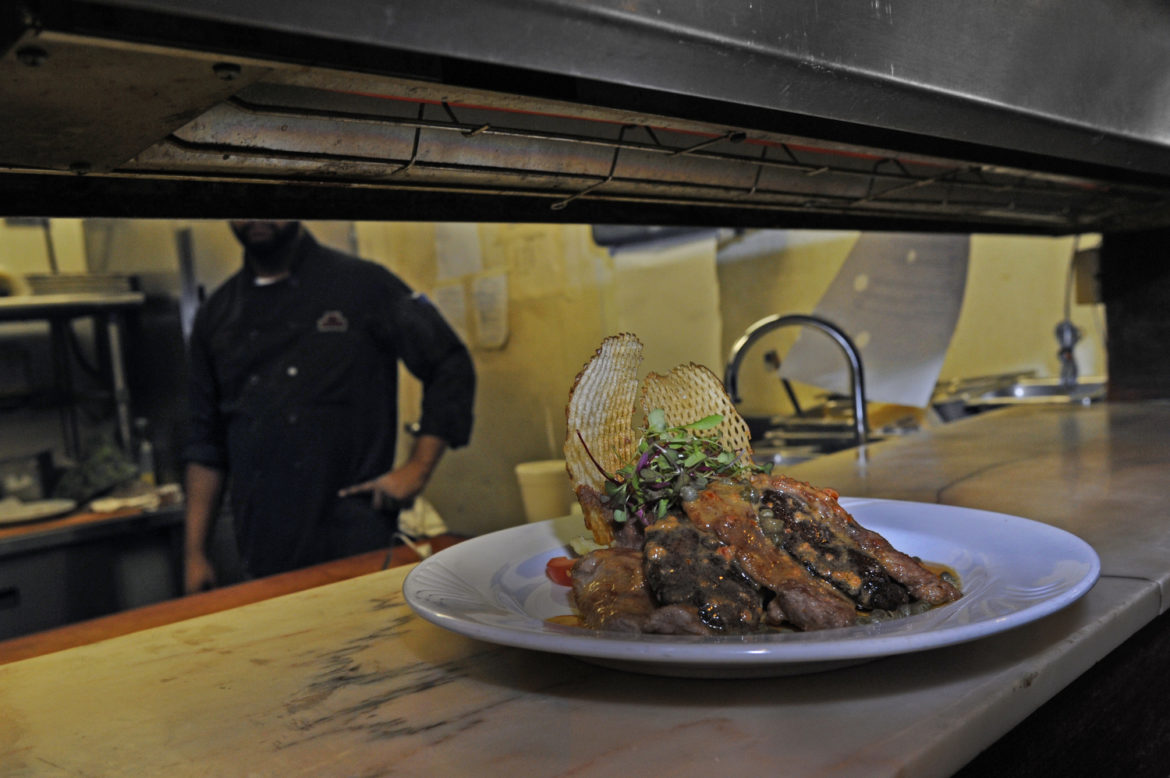 One burger joint in Pittsburgh has repeatedly kept raw hamburger meat, lettuce and coleslaw at temperatures that allow bacteria to flourish. A chain restaurant’s worst violations in the past three years were a missing floor tile and a dirty floor drain.

Both restaurants have maintained their approved-to-operate green stickers from the Allegheny County Health Department, but one would’ve earned a ‘C’ and the other an ‘A’ if the county’s attempts to institute a restaurant grading system had passed.

Nearly all of the roughly 4,200 restaurants in the county have a green sticker — no matter whether it had five high-risk health violations in its last inspection or none.

There have been two failed attempts, most recently in May, to pass an A-B-C restaurant grading system that could give consumers more refined health information at a key decision-making point — entering a restaurant.

Although the Allegheny County Health Department supported the change, the county council voted the A-B-C system down 12-1. Everyone who spoke at the meeting opposed the measure. Most were from the restaurant industry.

PublicSource wondered why there was so little support for the measure when the Centers for Disease Control and Prevention estimates about one in six people get a foodborne-related illness a year.

So, we acquired the criteria for the potential grading system and records of health inspections from July 2014 through April 2015. The result of combining the two is a look at how county restaurants would have scored under the letter grading system.

About three-quarters of nearly 5,000 restaurant inspections in the county would’ve resulted in an ‘A’, according to the PublicSource analysis.

About 18 percent of inspections would’ve earned a ‘B’ and 6 percent would’ve gotten a ‘C’ grade. A ‘C’ grade could include multiple high-risk violations, such as cutting lettuce on the same surface as raw meat, in addition to several medium- and low-risk violations.

The analysis started with July 2014 because that’s when inspectors started assigning a level of severity to each health inspection violation.

The analysis showed there were 57 inspections in that 10-month period that would’ve fallen below a ‘C’ and warranted an alert or closure by the health department.

“When we examined the number of violations that were occurring on first inspection and also the number of repeat visits that we were being required to do, it was very apparent that there needed to be changes made” to the inspection system, said Dr. Karen Hacker, head of the Allegheny County Health Department.

But the county council voted the measure down. “The council represents the populace so we must abide by that decision,” Hacker said.

Allegheny County has a green, yellow and red system, which basically operates as a pass or fail method.

Green means a restaurant is permitted to operate; yellow means the health department issued an alert to warn consumers about poor health conditions; and red means the restaurant was ordered to close.

It wasn’t always this way. Pittsburgh had an A-B-C grading system, along with many other cities, after World War II. Allegheny County instituted its current system in 1994.

Kevin Joyce, owner of The Carlton Restaurant, a white-tablecloth restaurant in downtown Pittsburgh, was a chief opponent of the recent proposal to change the system. He said, “I think what a green rating means is that it's a place that's safe to eat — that the county's inspected it and it's safe to eat.”

However, as PublicSource found, there’s a wide spectrum of cleanliness in the kitchen among restaurants operating with a green sticker.

About 18 percent of inspections would have resulted in a perfect score during the 10-month period studied, while 12 percent had at least two-high risk violations in a single inspection.

The most common high-risk violations include not following cleanliness guidelines and not keeping food hot or cold enough.

Several of the city’s well-known chefs and restaurant owners declined to be interviewed about the grading system.

Consumers might not be aware of problems at restaurants unless they go to the health department’s website to view inspection reports.

John Graf, who owns the Priory Hotel on the North Side and is vice chair of the Pennsylvania Restaurant and Lodging Association board, said the inspection reports provide the best information to consumers.

“How long does it take to go to the county website?” Graf said. “People are on Google or Facebook for hours on end, you know, use your smartphone and look it up. I don't see that that's a huge barrier.”

Grades are based on the most recent inspections as of April 30, 2015. Restaurants may have been inspected since then. Check here for updated inspection reports. PublicSource interpreted criteria provided by the Allegheny County Health Department to determine grades. The department did not review or approve the grades. Download the data.

Doug Powell, a former food safety professor at Kansas State University and co-author of the food safety blog BarfBlog, said health information is most effective at the point of sale.

As an alternative, the Allegheny County Health Department is exploring the idea of putting QR codes on restaurants, so someone with a smartphone could scan the code and see the restaurant’s health inspections.

Heidi Balas, who blogs about food at The Steel Trap, said it would’ve been interesting to see whether her favorite restaurants scored well.

But, as a high school English teacher, Balas also said she understands the fears restaurant owners have about all their work being reduced to a single letter grade.

“Our schools are graded based on test scores….Our bridges are graded,” she said. “We live in a world where we expect things to be graded and we're used to it.”

Rating systems can be good, but not perfect, indicators of quality.

Under the restaurant grading system, if a restaurant did receive a ‘B’ or a ‘C’, they could have requested a re-inspection.

Joyce highlighted the pressure that anything but an A would put on a restaurant owner.

“I wouldn't want a B grade on my door, if I was a good operator, for even a minute,” he said.

In New York City, which has had an A-B-C grading system for about five years, the grades have improved over time. The proportion of restaurants receiving A’s has increased from around 50 percent in 2011 to 80 percent in 2014, according to an analysis by news group FiveThirtyEight.

Some cities, such as New York and Los Angeles, have asserted that their restaurant grading systems have contributed to decreases in foodborne illness outbreaks.

Other municipalities have worked to integrate their health inspection information with Yelp, a website that allows users to publish reviews of businesses.

Yelp users in some areas, like Raleigh, N.C., can see a numerical score based on health inspections and the types of violations found at the restaurant.

At the May 5 Allegheny County Council meeting, members heard from seven people in the restaurant industry. No one commented in favor of the proposal.

“There was no crisis and often when you're trying to pass regulations that may not be popular or at least might not be popular with some segments, it is that crisis that pushes things forward,” Hacker said.

“The public all along has yawned,” said Joyce. “In other words, there have been now four public hearings on this issue. Four. Not one person showed up to testify in favor of this proposal.”

Sarah Schacht is a two-time e.coli survivor — one of more than 700 people who got sick during the 1993 Jack in the Box e.coli outbreak — and advocates in Seattle for the public disclosure of restaurant grades. She said a grading system proposal needs people to attend meetings and shepherd it along.

“Ideas and concepts that I surfaced would not have been discussed without me there,” she said.

John Longstreet, the CEO of the state restaurant association who came from Harrisburg to lobby against the bill, said this measure was important for his organization because if one city in Pennsylvania adopted a grading system, it might expand to other cities.

Sue Means, R-Bethel Park, was the only county council member out of five contacted by PublicSource who responded to interview requests to explain their votes against the grading system.

“There's not an outcry from physicians, from hospitals...the medical community in Pittsburgh or Allegheny County were not demanding restaurant grading,” Means said.

Some in the general public voiced concerns after the vote, as commenters on news articles.

One commenter wrote: “Yet again putting business interests ahead of the welfare of actual citizens. We deserve to easily know how clean a restaurant is.”

Another wrote: “I'm new to Pittsburgh, and honestly, this is one of those many areas where Pittsburgh is so out of touch with the rest of the country that it boggles the mind.”

Means had not heard these criticisms of the vote and said that, on its surface, the grading system sounded reasonable.

“You have to be there,” she said. “You have to get all the information. You don't vote on something because it sounds like a good [idea].”