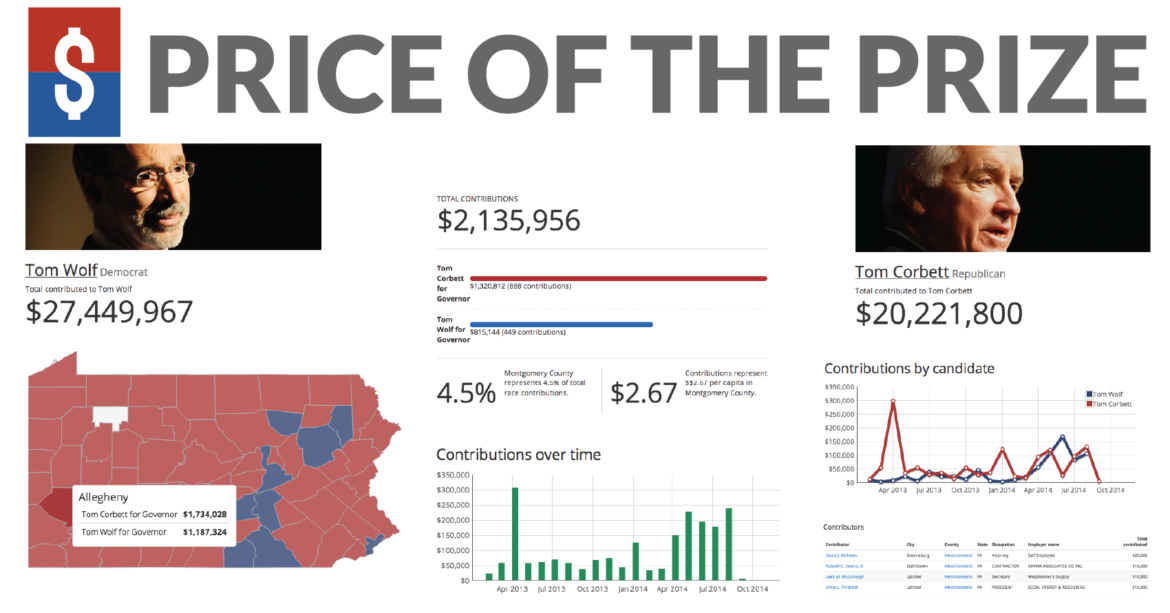 Less than a month before the election, Republican Gov. Tom Corbett and his challenger, Democrat Tom Wolf, have raised and spent enough money to put the governor’s race on track to be the most expensive in state history.

That’s a total of $48.2 million raised on a race where Wolf has consistently been ahead in the polls by a double-digit margin.

If the polls hold, Corbett would be the first incumbent governor to lose since Pennsylvania switched to two-term limits for the governor in 1968.

Of course, no race is ever a foregone conclusion. It’s always important to know where the money is coming from. Big donors have big influence. So PublicSource and the Pittsburgh Post-Gazette are collaborating to show you who’s giving, and how much.

Combined, the two campaigns have run nearly 21,000 television ads costing more than $13 million. Pennsylvania’s state candidates have spent more than most other states on television ads, according to The Center for Public Integrity. Wolf’s surge of TV ad spending has continued into October.

He spent twice as much as Corbett on ads during the first two weeks of the month.

Despite Wolf’s lead in the polls, there has been increased Republican support for Corbett in recent weeks. Last month, Corbett won the support of a majority of Republicans — 62 percent — compared to 48 percent in the August Franklin & Marshall College poll. Before September, more Republicans had been undecided.

The Quinnipiac University poll from Oct. 7 found a similar trend among likely voters. They found 75 percent of likely Republican voters supported Corbett, up from 66 percent in September.

The poll said this is still “one of the lowest rates of same-party support for an incumbent governor in any of the nine states surveyed by Quinnipiac University.”

Voters who may have been leaning toward Corbett are now beginning to express themselves in the polls as the election gets closer. For an incumbent with low approval ratings, right-leaning voters may not have been willing to declare their support for Corbett early in the race, as explained by Kristin Kanthak, associate professor of political science at the University of Pittsburgh.

“This kind of tightening is really pretty common with someone where their positive numbers aren’t very high,” she said.

But more Republicans are supporting Corbett now, either because they always intended to vote for him or because they didn’t see Wolf as an acceptable alternative.

The Republican Governors Association gave Corbett $4 million this summer and remains his largest donor and the only contributor to give him more than a million dollars. The RGA, through its state political action committee, has given Corbett more than $5.8 million in total during this election.

“The amount of money that Corbett is getting from the RGA is pretty substantial, but he’s also the most endangered Republican in the country right now,” Kanthak said.

These types of large contributions are possible in Pennsylvania because it is one of 12 states that has no limits on how much individuals, state parties, or Political Action Committees (PACs) can give to candidates.

The RGA is a 527 organization, which is the IRS code for groups that advocate for issues, not candidates, during elections. Nationwide, the association has raised more than $97 million during this election and more than $300 million since the start of 2009, according to The Center for Responsive Politics.

The RGA receives money from mega donors, large corporations and some of the richest people in the U.S. During the 2014 election cycle, the RGA’s top donors are David Koch, of Koch Industries, a manufacturing conglomerate; Sheldon Adelson, of Las Vegas Sands, a casino company; and Paul Singer, of Elliott Management, a hedge-fund management company.

Even though Corbett has been behind in the polls, the RGA still wrote monthly checks to his campaign this summer.

“The governors association, in terms of money, still seems to be very interested in this race,” said Zachary Baumann, a lecturer in political science at Penn State University.

Beyond the RGA’s contributions, its chairman, New Jersey Gov. Chris Christie, has come to Pennsylvania five times to, in part, help Corbett.

“The RGA and Gov. Christie have been very supportive of the Governor,” said Billy Pitman, press secretary for the Corbett campaign.

Even though Corbett is trailing in the polls, there are other races that are closer in the state.

“This is a bigger game than just winning the governor’s mansion,” Baumann said.

Baumann said Republicans are fighting for control of the state legislature and rallying the base. Giving Republicans a reason to vote could matter on Election Day because if Republicans turn out to support Corbett, that will help other Republicans in local races.

Corbett’s top individual donor this summer was John Templeton Jr., president and CEO of the John Templeton Foundation, who gave another $500,000 on top of the $420,000 he already gave Corbett.

Wolf and the labor unions

During the primary, Wolf did not receive a lot of support from labor unions. He had stronger backing from the teachers’ unions, which gave him more than $1 million.

The Pennsylvania Service Employees International Union was the only labor union among Wolf’s top 10 contributors in July.

That all changed over the summer.

Four of Wolf’s top 10 contributors this summer were labor unions, who gave him more than  $1.4 million. Those unions were the American Federation of State, County, and Municipal Employees ($500,000), International Brotherhood of Electrical Workers ($410,000), Mid-Atlantic Laborers’ Political League ($300,000) and United Steelworkers ($200,500).

“What we typically see is groups are strategic in giving money and this is especially true of labor unions,” Baumann said. They want to have access to the eventual winner, he said.

Wolf downplayed his relationship with the unions during the first gubernatorial debate, saying he didn’t win their endorsement during the primary.

Kanthak said Wolf is not a typical pro-union candidate because he comes from management. Wolf is the non-executive chairman of The Wolf Organization, which builds kitchen cabinets. He was formerly its chairman and CEO. It seemed logical, Kanthak said, that the labor unions might’ve been a bit cold, initially, to him.

Wolf’s spokesman, Jeffrey Sheridan, said that even though Wolf received a lot of money from the unions, he still is committed to tackling the state’s lack of money to solve the pension crisis. The unions’ support “doesn’t change the fact that he’s going to address that problem,” Sheridan said.

Pitman, Corbett’s spokesman, questioned whether the union contributions would influence Wolf when it came time to address the state’s pension crisis. “They (the unions) want to keep the status quo, protect their bottom lines,” he said.

Other than Wolf’s $10 million contribution to his own campaign, his top individual donor was M. Thomas Grumbacher, the chairman of the board of Bon-Ton department stores. Grumbacher gave Wolf $1 million this summer in addition to more than $1 million he gave him during the primary.

Other top individual donors to Wolf were Louis Appell Jr., the former owner of Susquehanna Pfaltzgraff Co., a pottery maker, who has given Wolf $725,000, and Wolf’s father William Wolf, who’s given $650,000.

A deluge of ads

Both Corbett and Wolf have raised lots of money to spend on television ads, which are typically a campaign’s largest expense.

Corbett has spent nearly $7 million on ads and Wolf has spent more than $6 million.

The ads expose voters to the major talking points and storylines the candidates would like to emphasize. But they also allow the candidates to point out what they believe are the flaws in their opponents views.

“It gives candidates a chance to create their own narrative. It’s a lot easier for Wolf to create his own story than Corbett because we already know a lot about him,” Kanthak said.

“People have that sense of him because he’s been able to create that image on his own,” she said.

In the latest Franklin & Marshall College poll from Sept. 25, 90 percent of respondents said they had seen ads by both candidates. Respondents remembered seeing negative ads, ads about education and ads about energy companies paying more taxes.

But the effect of ads in this campaign may be relatively small since both candidates were able to raise lots of money and run lots of ads, according to Baumann. Advertising matters more when one candidate can run many more ads than the other, he said.