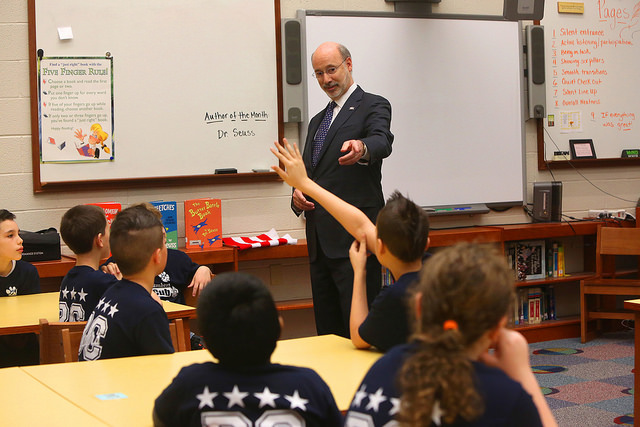 Rich school, poor school. That’s the story of Pennsylvania’s school system — the most unequal in the country.

The state’s poorest school districts receive about 33 percent fewer state and local tax dollars per student than the wealthiest districts, according to federal data from the National Center for Education Statistics, as analyzed by The Washington Post.

“When the state systematically, significantly underfunds children who weren’t born with a silver spoon in their mouths, something is wrong with that picture”

Gov. Tom Wolf is attempting to address that inequity in his first budget proposal.

Pennsylvania, more so than other states, relies on local property taxes to fund its schools. The problem with that system is that poorer communities have lower property values, therefore the school district will either collect less money or it has to charge its residents a higher property tax rate than wealthier districts.

Wolf wants to send more state dollars to poorer school districts so they can reduce property taxes. He recently told the Post:

“One of the great civil injustices is to say we’re going to make your education dependent on your Zip code.”

In addition to reducing property taxes, Wolf has proposed increasing the state’s income and sales taxes. He has also proposed adding 46 new categories of goods and services on which buyers would have to pay sales tax.

PublicSource recently published a story explaining the details of Wolf’s budget and a tax calculator where people who live in Allegheny County can find out whether they would pay more in taxes under Wolf’s plan.