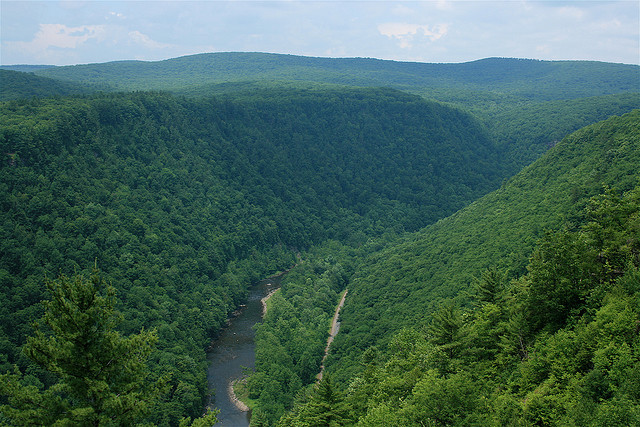 "Natural gas development is vital to Pennsylvania's economy, but so is the economic and environmental viability of our parks and forests," said Wolf, a Democrat. "This is about striking the right balance. Our state parks and forests are unique assets that should be preserved, protected, and utilized by our residents for recreational purposes."

Last year, Gov. Tom Corbett, a Republican, lifted a previous moratorium put in place in 2010 by Gov. Ed Rendell, a Democrat. Corbett implemented a new policy that allowed gas to be tapped by drilling horizontal wells underneath state parklands from nearby properties, but restricted surface activity.

To be clear, the moratorium, or ban, applies only to new drilling. Companies with fracking operations currently leased or operated on state lands aren’t affected. The state has allowed about 700,000 of the 2.1 million acres of state forests to be developed for oil and gas drilling.

From the Pittsburgh Post-Gazette:

The state Department of Conservation and Natural Resources [DCNR] has approved more than 1,000 Marcellus Shale gas wells on forest lands, and about 600 of those wells have been drilled on 230 wellpads. But there is room on existing leases for as many as 6,000. If all of those wells are drilled and developed, approximately 25,000 forested acres would be converted for roads, pipeline right of ways and well pads.

Wolf’s order states that, effective immediately, “DCNR is directed to protect the lands of the Commonwealth that are held in trust for its citizens and for generations,” according to a statement released by the governor’s office.