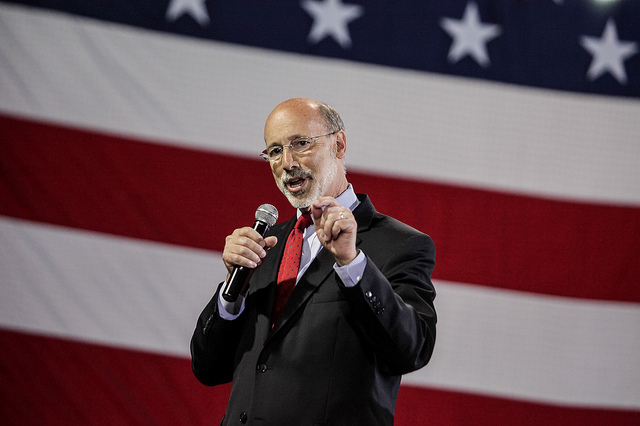 Gov. Tom Wolf marked a small victory this week in his ongoing fight to raise the minimum wage.

On Monday, Wolf signed an executive order that will raise the minimum wage from $7.25 to $10.15 for Pennsylvania state employees under his jurisdiction and those hired under future state contracts.

His order will only affect about 450 workers. Wolf continued pushing for the state Legislature to raise wages across the board.

Wolf’s campaign supports raising the minimum wage for all Pennsylvanians to $10.10 and tying it to inflation, which means that when the cost of living rises, so would the minimum wage.

“The goal is to do what I can as governor to make sure that the people working in Pennsylvania have a living wage, or as close to a living wage as we can get,” Wolf told the Pittsburgh Post-Gazette.

On Tuesday morning, Wolf spoke at MOM’s Organic Market in Bryn Mawr, which pays its employees above minimum wage. He was joined by State Sen. Daylin Leach, D-Montgomery/Delaware, who has introduced a bill to raise the wage to $15.

“This is a big company that’s making this change,” said Steve Hoenstine, Leach’s spokesman. He acknowledged that minimum wage reform has become controversial among Pennsylvania lawmakers.

“It’s a really bold move by Gov. Wolf,” Hoenstine continued. “It just seems like there’s this dysfunction within the Legislature that’s blocking progress.”

Republicans and opponents of raising the minimum wage have raised concerns about businesses having to lay off workers or shut their doors if they’re pushed to pay more than they can afford.

Alex Halper, director of government affairs for the Pennsylvania Chamber of Business and Industry, told PublicSource last year that proponents of the minimum wage increase aren’t weighing all the options.

“Advocates [of raising the minimum wage] sort of present this false choice,” Halper said. “Either you support these significant increases to entry-level wages, or you don’t care about people in poverty.”

After Wolf’s order on Monday, Republicans in the Legislature were also disgruntled about the governor’s tactics.

“Outside of his two budget addresses, raising the minimum wage is not something the governor has emphasized as important during our ongoing conversations,” Senate Majority Leader Jake Corman, R-Centre, said in a statement to the Pittsburgh Post-Gazette.

In November 2015, Pittsburgh Mayor Bill Peduto issued an executive order for the city that will raise wages for city employees to $15 an hour by 2021.

PublicSource found that the move would affect roughly 100 crossing guards, more than 70 clerical positions and some 40 to 50 garbage truck drivers, according to data provided by the city.

Hoenstine said these are positive steps, but, ultimately, the state will have to follow surrounding states — including New Jersey, New York and Ohio — that are already requiring a minimum wage above $7.25 for all workers.

“[Right now], if you’re a company and you want to take advantage of workers, well, you go to Pennsylvania,” Hoenstine said. “The next step has to be that we have to pass legislation.”