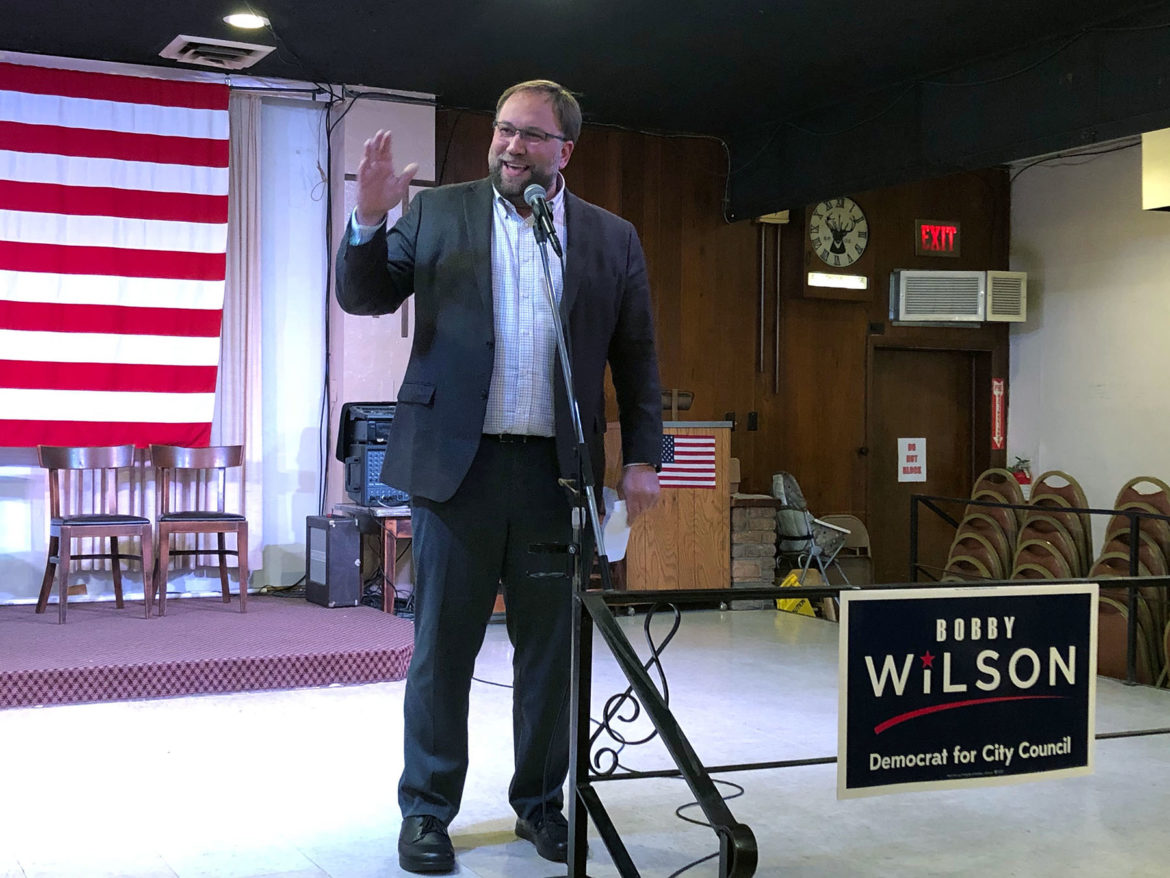 Bobby Wilson addresses his supporters at his post-election celebration at the Elks Lodge in the North Side. (Photo by Juliette Rihl/PublicSource)

After nearly 13 years of being represented by Councilwoman Darlene Harris, the North Side has a new City Council representative.

“What this means is a new progressive North Side,” Wilson said in his victory speech Tuesday evening. ”We continue to really change the face of how we’re going to collaborate with people, whether it’s City Council or the mayor.”

Wilson credited voters for supporting his vision for the district.“We’re going to get more for us. And it’s because of the voters of District 1 that came out and voted for me, this campaign, that we’re going to be able to do that.”

Wilson, a medical researcher at the University of Pittsburgh and father of three, said in an interview before Election Day that his top priority for the North Side is affordable housing. “I want to provide ways and collaborate with others on how we can provide long-term affordable housing for people,” he said. Options he plans to explore include public-private partnerships, partnerships between the Urban Redevelopment Authority [URA] and local community development corporations and land trusts.

Equitable development is another priority for Wilson. He said he will work to prevent future displacement of North Side residents. “There’s so much of the North Side that has been left behind, so you have to be careful of what type of development you welcome,” he said. “Moving forward in the North Side, I want to make sure people aren’t left behind.”

In contrast to his predecessor, Wilson said he hopes to improve the level of transparency of the office by “empowering people and organizations to have all the information they need.”

“Our members want to make sure that [there are] members of City Council that will stand up for affordable housing and low-wage workers,” said Sam Williamson, chairman of the URA and 32BJ SEIU Western Pennsylvania District Director.

Sadie Powers, 36, of Spring Hill commended Wilson’s knowledge of the community. “What appealed to us is he’s been on the North Side for so long, and he knows the neighborhood really, really well,” she said.

Greg Kale, 37, also of Spring Hill, supported Wilson as well. “I like some of his plans on being a little more professional. He comes across as personable.”

Voter turnout was reported at 25%.

As of Oct. 31, Wilson raised over $60,000 in campaign contributions, according to campaign finance information collected by Pittsburgh's Ethics Hearing Board. Rosselot, who was endorsed by the Pittsburgh Federation of Teachers, raised $17,977, while Jarrett raised $203, all in small amounts under $50.

Rosselot is a community development consultant and former aide to U.S. Sen. Bob Casey [D-PA]. He questioned Wilson’s ability to act independently on council given his close relationship with Peduto. “When you’re funded by the mayor and a lot of his allies, that’s going to be hard for Bobby to do,” Rosselot said.

Jarrett, who is a member of the Socialist Workers Party, also stressed the importance of affordable housing. “Working people are in a housing crisis,” he said. His other campaign priorities included amnesty for all undocumented workers and the fight against police brutality. The goal of the Socialist Workers Party is to “build a voice for working people and then eventually a labor party,” Jarrett said.