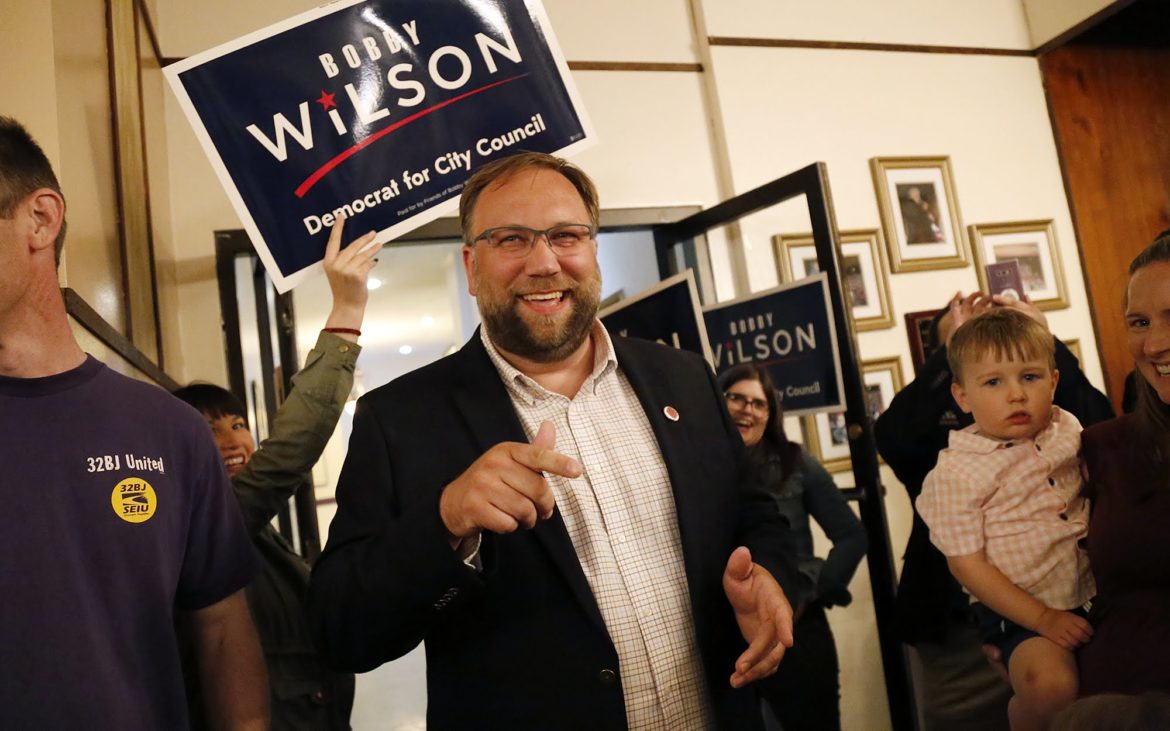 For Bobby Wilson, the third time was the charm.

At Wilson’s election-night party in Deutschtown, the mood was jubilant.

“As you know, I’m not used to winning,” Wilson said as supporters cheered. “But we won.”

Even when just 39% of votes were tallied around 9 p.m., Wilson, a medical researcher at the University of Pittsburgh, said Harris had called him to concede and congratulate him on the win.

“It was a nice conversation,” said Wilson, who had been endorsed by Pittsburgh Mayor Bill Peduto in the Democratic primary.

For her part, Harris took the loss easily.

“I wasn’t sure if I was going to run or not,” she said Tuesday night. “So I was debating whether or not to retire. I’ve worked in the community for 45 years.”

In both 2011 and 2015, Wilson tried to unseat Harris, saying the North Side needed fresh leadership. Yet where Wilson split the district’s votes with other challengers in those years, he overtook Harris with about 57.5% of the vote Tuesday (2,437 votes with 95% of precincts reporting as of 10:45 p.m.).

Along with Wilson, Democratic council members Bruce Kraus, Corey O’Connor, Deborah Gross and Rev. Ricky Burgess all advance to the general election. There are no declared Republican challengers. 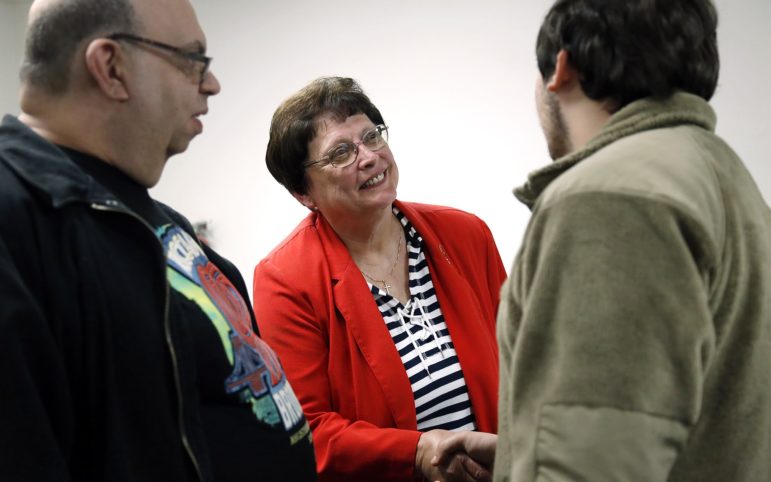 Five seats on city council were part of the primary election on Tuesday as 10 challengers mounted campaigns to oust four incumbents. O’Connor ran unopposed in District 5 this year.

In District 9, Burgess beat out four challengers to earn his fourth term on council. He earned about 38.5% of the vote (1,998 votes) to continue representing Homewood, Larimer, East Liberty and other East End neighborhoods.

Kierran Young, a political consultant, was the next closest with nearly 29% of the votes (1,504 votes). As of now, Burgess is expected to face housing activist and former school board member Randall Taylor, who is running as an Independent in the general election.

In District 3, Kraus, the president of city council, surpassed two challengers: his former chief of staff Ken Wolfe and University of Pittsburgh student Chris Kumanchik, earning nearly 54% of the vote (1,321 votes with 96% of precincts reporting).

Earlier in the day, poll workers in the Allentown neighborhood shared positive notes about Kraus. “He’s a councilman for the people,” said Mary Carnes, 50. “He comes and brings us pretzels. I like him. He’s a good council president. He visits the Caliguri Apartments where I live.” 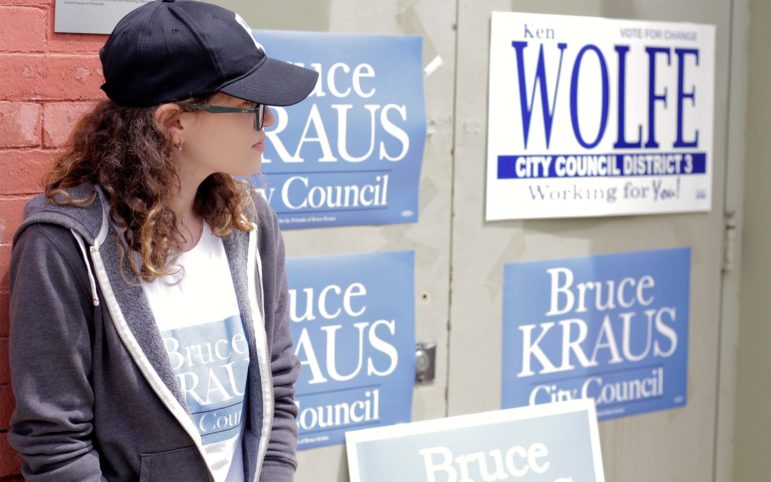 Brosha Tkacheva, chief of staff for Councilman Bruce Kraus, stands next to signs outside of South Side Market House. (Photo by Jay Manning/PublicSource)

In District 7, Gross, of Highland Park, fended off challenger Deirdre Kane, a board member of Lawrenceville United and a former small business owner. The district includes Bloomfield, Lawrenceville, Highland Park, Morningside, Polish Hill, the Strip District and parts of Stanton Heights and Friendship. Gross earned 58.7 percent of the vote (3,449 votes).

“The public has to get involved,” she said, noting that the primaries are vital in Pittsburgh. “People don’t understand it enough. I don’t think there is enough education on it.”

A longtime Garfield resident, McGill voted inside her first-grade classroom at Laurentian Hall. She said there’s an education gap between candidates and voters. She wants to work to close that gap in her neighborhood because, “if we repeat history, we’re in trouble.” 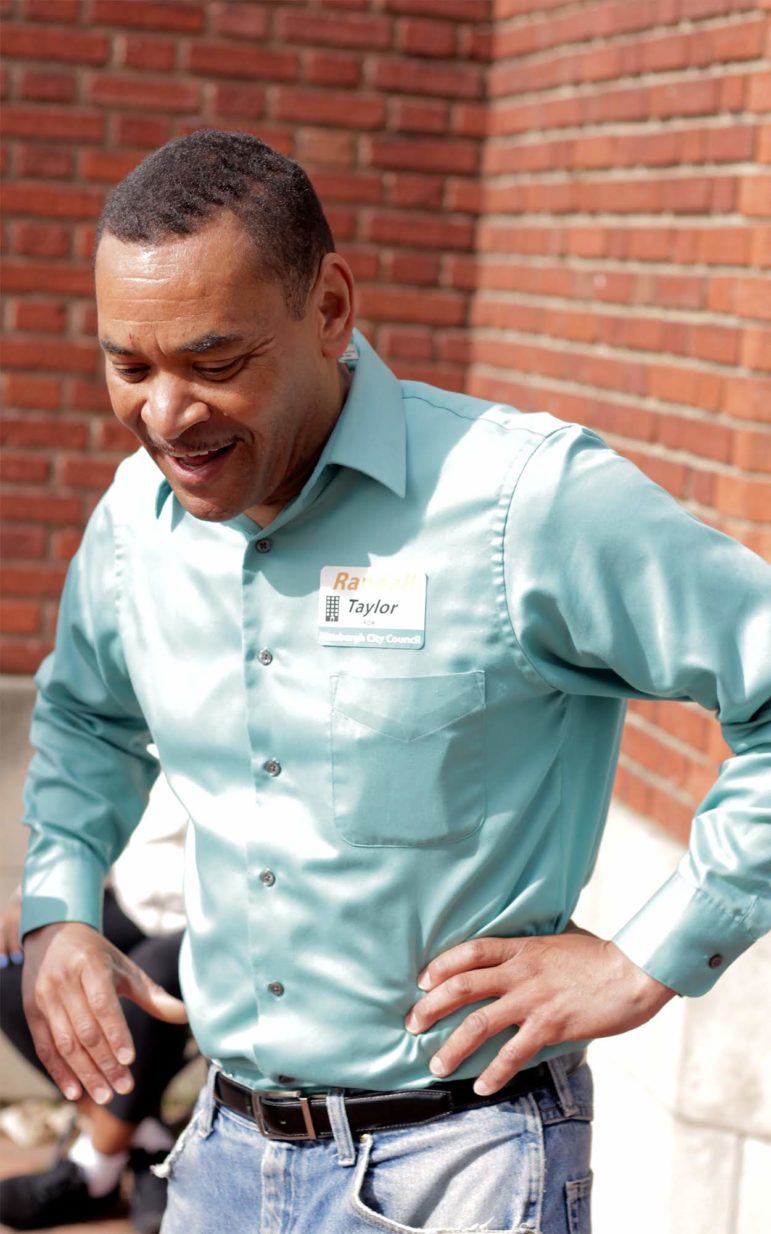 Linda Buckner, a 67-year-old Garfield resident, said she based her city council vote, in part, on affordable housing. Buckner didn’t want to say who she voted for, calling it a private matter, but said she wanted to see more housing for low-income people built in her neighborhood.

“They tore down a lot of the buildings that housed a lot of low-income people and...I want to see that they're going to build that back up for the people,” she said. “I used to see so many kids in Garfield and now I don't see the kids I used to see...where are the kids going? Why aren't they here in Garfield anymore?”

Housing has been a hot topic in District 9. Between 2015 and 2017, developers evicted tenants from Penn Plaza, an affordable apartment complex in the district, and demolished the building. In April, Burgess and other civic leaders unveiled a master plan for the Homewood neighborhood that included plans for building new affordable housing.

B.J. Samson, a Democratic committeewoman in District 9, didn’t want to share who she voted for but had some critiques of the area’s leadership.

“You see a lot of community things done at the time of election but, in-between times, where are they?” she said.

Days before Tuesday’s election, protesters criticized Burgess and other city leaders for opening a new spray park in the district.

Samson also said she’s been lobbying the city for years to have her street paved but hasn’t had any luck.

“We pay taxes, I pay big-time taxes,” she said. “All I'm saying is give me something back or tell me why other streets get paved and re-paved and we haven't gotten paved.”

At his election night party Tuesday night, Burgess said his victory reaffirmed community support for his leadership. Burgess said he was confident his primary win would lead to another victory in the fall.

Acknowledging the field of challengers he faced, Burgess said he needs to interact with more community members.

“I think that I need to spend more time talking to individual residents. And I will do that,” Burgess said. “I think one of the dangers of being an incumbent, and certainly a long-term incumbent like I am, you think you kind of know the issues. But those issues change.”

Going into his fourth term, Burgess said he wants to work together with those who challenged him, along with other residents and community leaders to revitalize areas of isolated poverty into mixed-income communities.

“Only by working together do we make things better,” Burgess said.

Update: This story was updated on May 22, 2019 to include comment from Councilman Rev. Ricky Burgess.