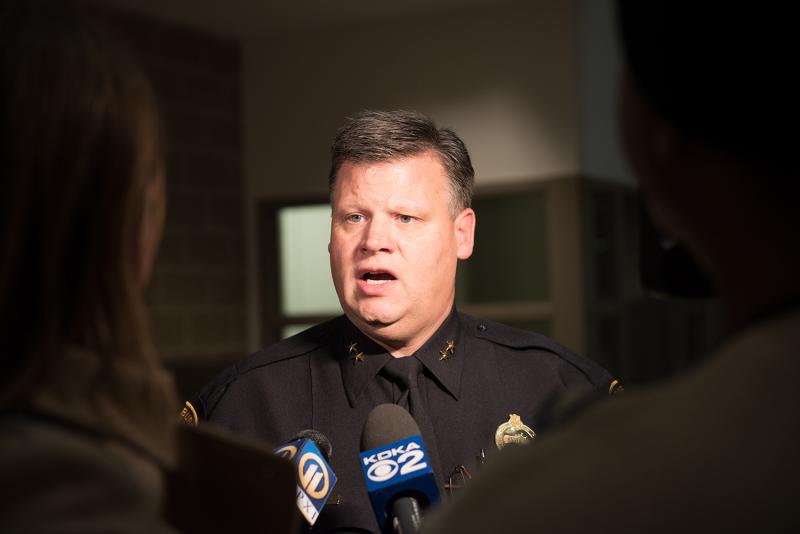 Acting Police Chief Scott Schubert spoke to community members and the media on Nov. 30 at the Kingsley Association in Larimer. He talked about his 24-year career on the Pittsburgh police force and his plans for sustaining the reforms championed by the former police chief, Cameron McLay.

Acting Police Chief Scott Schubert promises to keep the reforms his predecessor brought to Pittsburgh. He doesn't anticipate the officers resisting it.

“I really don’t expect to get pushback,” Schubert said at a community forum last night at the Kingsley Association in Larimer, explaining the importance of strong relations between officers and residents.

No pushback would be vastly different treatment from what Cameron McLay faced before abruptly announcing his resignation as chief on Nov. 4.

The departure shocked residents who saw McLay as a badly needed force for change. After being recruited as an outsider to reform a bureau in disarray and to heal deep wounds between police and residents, he served two years and said he no longer thought he could make progress on reforms.

Brandi Fisher, president of the Alliance for Police Accountability, said Schubert’s statement is either naïve, or an indication that he won’t take a stand against officers if required.

“I honestly don’t see the officers having the fear of accountability with Chief Schubert,” said Fisher, one of the organizers of the event, which drew about 50 people, including press and city staff.

In the two years McLay served as chief, Fisher said her organization received two complaints from residents about officer misconduct.

In the two weeks after McLay departed, the group has received six complaints. Three times as many as McLay’s whole tenure.

“That was the big red flag,” said Tim Stevens, founder of the Black Political Empowerment

Project, another event sponsor. “It sent a bad signal.”

Schubert, who spent much of the Wednesday forum reciting the timeline of his 24-year career in Pittsburgh, said reforms will not waver.

Under McLay, the bureau actively courted community partnerships, relaunched a failed anti-violence initiative, and emphasized the importance of data-based policing, officer accountability and training in alternatives to deadly force. He also promoted the importance of having a diverse police force, though McLay said at his departure that he did not feel enough progress had been made.

Community policing is part of the job, Schubert said. Officers who don’t like that can find jobs elsewhere. Tim Stevens, founder of the Black Political Empowerment Project, and Brandi Fisher, president of the Alliance for Police Accountability, gave final remarks after the acting police chief addressed the crowd. Their groups sponsored the community forum.

While the chief has committed verbally to following McLay’s lead, community leaders are fearful that McLay’s efforts to repair relations with residents will slip.

But almost from the outset, McLay was seen by some officers as an enemy.

At a New Year’s celebration months after he took the job in September 2014, McLay was photographed holding a sign saying he vows to challenge racism at work. He shut down his Twitter account after retweeting the photo, launching a firestorm and drawing a rebuke from the police union. (The image is currently his profile photo.)

The police union also blasted McLay for speaking on police reforms at the Democratic National Convention in July. In September, the union announced that 277 officers voted that they had no confidence in McLay as chief.

Rumors have also spread about conflicts between McLay and Wendell Hissrich, the city’s public safety director. When asked at Wednesday’s forum, Hissrich said that any conflicts between him and McLay were handled professionally.

When McLay announced his resignation, Stevens called the loss a “tragedy for the city of Pittsburgh.”

Yesterday, Stevens said calling his feelings over McLay’s departure ‘disappointment’ is understating it. But he said he has been heartened so far by his interactions with Schubert.

Stevens and Fisher held a Nov. 4 press conference at police headquarters about the leadership change. Stevens commended Schubert for talking with organizers beforehand, seemingly on his own, and committing to following through on reforms.

“He’s been very available,” said Stevens, who has met with the acting chief since.

Fisher said she called McLay recently, partly to vent and partly to ask a policy question. He told her to “stick to it and keep going.” McLay said at his resignation conference that he thinks the bureau will continue with reforms.

Despite concerns, Fisher said she’s hopeful and waiting for Schubert to prove himself.

Mayor Bill Peduto told Schubert he had 90 days to show he’s the right choice to lead the bureau. There will be no search for an outsider, and if Schubert passes the trial period, the job is his.

Stevens closed the evening by telling the crowd that reforms happen when residents speak out.

“Even though we get frustrated, we get upset, we cannot stop the fight,” he said.

Another community forum where Schubert will speak is set for 6:30 p.m. Monday at Grace Memorial Presbyterian Church in the Hill District.