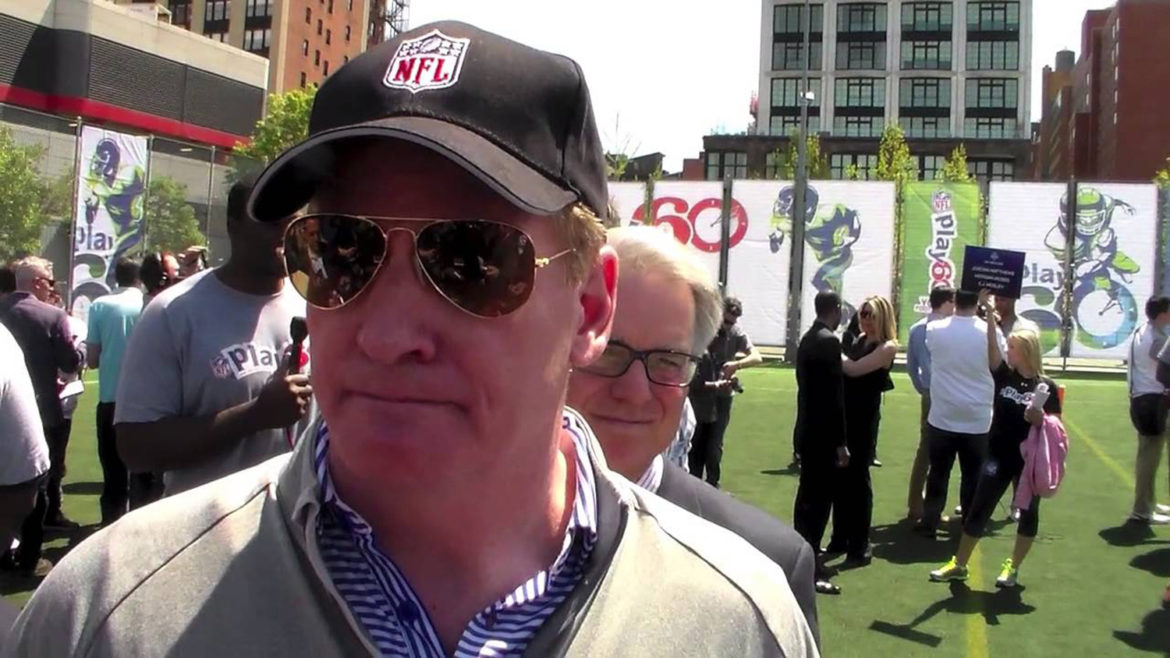 Update April 28, 2015: In the midst of several National Football League scandals last October, PublicSource asked freelance writer Patrick Doyle to take a look at the nonprofit status of the league. On April 28, NFL Commissioner Roger Goodell said the league will no longer be tax exempt, eliminating a "distraction."

A list of America’s best compensated CEOs, as you might imagine, includes a dream team of industry titans. According to Equilar, which collects data on executive salaries, Oracle’s Larry Ellison pulled in $96.2 million of total compensation in 2012; he’s followed by other bold-faced business names like Robert Iger of Walt Disney ($37.1 million), Rupert Murdoch of 21st Century Fox ($22.4 million), and Alan Mulally of Ford ($21 million).

Another member of that salary stratosphere is Roger Goodell, the commissioner of the National Football League, who earned $44.2 million in total compensation in 2012.

The difference between Goodell and the rest, though, is that he runs a nonprofit. That’s right—the National Football League is, in the eyes of the Internal Revenue Service, a nonprofit.

That tax-exempt status has never been more in danger, due to rising political and public anger at recent NFL scandals, including the Ray Rice domestic abuse case, the Adrian Peterson child abuse case, and the Washington Redskins’ refusal to change their name and mascot.

In Southwestern Pennsylvania, the Pittsburgh Steelers have received their own self-inflicted black eyes: Following allegations of sexual abuse in 2010, quarterback Ben Roethlisberger served a four-game suspension, while recently re-signed linebacker James Harrison was arrested on domestic abuse in 2008 (those charges were later dropped).

Over the past year, three U.S. Senators have proposed bills to strip the NFL of its tax exemption, while more than 400,000 people have signed a Change.org petition urging Congress to act.

“We are subsidizing this institution that has been so incredibly obtuse about the issues of sexual violence,” says Lawrence Lessig, the director of the Edmond J. Safra Center for Ethics at Harvard University and the founder of Rootstrikers, a grassroots advocacy group that has campaigned against the exemption. “The American public obviously likes sports and football, but when you’re in a clearly commercial context, when an enormous amount of money is being made, the idea that you would be subsidizing it is craziness.”

To be clear: The entire NFL is not a nonprofit. Like many modern corporations, what we think of as “The NFL” is an entity composed of various subsidies, including the for-profit NFL Network (the cable and satellite network owned by the league), as well as 32 separate teams. In 2012, “The NFL” netted $9.5 billion in revenue through TV licensing, ticket sales and merchandise; the vast majority of that money is funneled through the league’s teams. The teams are subsequently responsible for paying “dues” to the league’s office, which manages rules, oversees referees and conducts “player safety research.” The league office received $326 million in dues in 2012, the most recent year for which such data is available. Only the league office, run by Goodell, is considered a nonprofit.

Unlike public charities such the American Red Cross and the Salvation Army, which are considered 501(c)(3) nonprofits, the NFL is a 501(c)(6) organization, a segment of the tax code that applies to trade associations such as the American Medical Association and the U.S. Chamber of Commerce and was created in 1942. These groups are afforded nonprofit status to support the “common interest” of the members of a particular industry. The AMA, for example, supports doctors across the country; the chamber advances collective business interests. Membership is supposed to be open to anyone who can meet some basic requirement, be it a medical degree or a real estate license.

Given that the NFL “trade association” is limited to just 32 teams, several experts told PublicSource that the league shouldn’t be considered a 501(c)(6) organization. Philip Hackney, an associate professor at the Law Center at Louisiana State University and a former attorney in the IRS’s department of tax-exempt government entities, points to the seemingly similar situation in the 1979 U.S. Supreme Court decision in National Muffler Dealers Assn. Inc. vs. United States. Muffler chain Midas tried to form a trade association of Midas dealers around the country to take advantage of the nonprofit tax breaks at the national office. The IRS denied the request, as did the Supreme Court, ruling that the association’s focus — which was to promote Midas — was far too narrow.

“In my mind, the NFL doesn’t fit very well [into 501(c)(6) status]” Hackney says. “They do some good things with charity, but the majority of what they do is promote the brand of the NFL and the 32 teams.”

Even among the other nonprofit leagues, the staggering NFL salaries stand out. For the sake of comparison, both National Hockey League Commissioner Gary Bettman and Professional Golf Association Tour commissioner Timothy Finchem each made $8.3 million. While the NBA has always been a nonprofit, Major League Baseball gave up its tax-exempt status in 2008 — in part, some reports say, to avoid revealing information about high salaries to the public.

When PublicSource reached out to the Pittsburgh Steelers for a comment on the league’s tax status, they referred us to the NFL’s league office. Brian McCarthy, the NFL’s vice president of communications, directed us to a 2013 U.S. News article written by Jeremy Spector, the league’s outside tax counsel. In the piece, Spector points out that in 2009, the IRS confirmed the league’s tax-exempt status, but fails to discuss either the NFL’s “common interest” as a trade association, or Goodell’s high salary.

“Ask yourself, why would a nonprofit anywhere — the whole purpose of a nonprofit is to help people — pay a CEO $44 million a year?” says Sen. Tom Coburn (R-Okla.), a critic of the NFL tax breaks. “That tells you’re not a nonprofit right there.”

Time for a change?

In September 2013, Coburn introduced the Properly Reducing Overexemptions for Sports Act (PRO Sports Act), which would remove nonprofit status from any sports organization with more than $10 million in annual revenue, including the NFL, NHL, PGA Tour and the U.S. Tennis Association. Sen. Angus King (I-Maine) has signed on to the bill, and U.S. Rep. Jason Chaffetz has introduced a version in the U.S. House.

According to Coburn, his proposed changes in the tax code would result in more than $109 million in new tax revenue over the next decade. “I don’t think pro sports teams are trade associations,” Coburn said. “They are companies that are promoting their own brand, their own teams, and their own league, and not sports in general. We need the tax revenue, and to stop giving it away to people who don’t need it.”

Two other senators have also recently offered variations on the tax exemption revocation. In September, Sen. Maria Cantwell (D-Wash.) put forward a bill that would strip the NFL of its nonprofit status until the Washington Redskins changed their name; her bill has the support of Majority Leader Harry Reid (D-Nev.). And following the Ray Rice scandal this autumn, Sen. Cory Booker (D-N.J.) proposed a bill that would use tax payments from the NFL’s league office to ramp up investment in domestic violence prevention.

Outside of Congress, two grassroots campaigns are advocating for the removal of the tax exemption. Lessig’s Rootstrikers, a nonprofit group that opposes the corrupting influence of money in politics, has started its own campaign in support of Coburn’s legislation, while a petition on Change.org had gathered more than 400,000 signatures as of press time.

The NFL has maintained its nonprofit status thanks, in part, to a sophisticated lobbying effort on both the local and national levels. According to Open Secrets, the NFL has spent nearly $3 million lobbying over the past three years, while a Sunlight Foundation report showed that NFL personnel — owners, players and staff — donated $1.5 million to candidates in the 2012 election.

As part of its effort to contain the PR crisis from the domestic abuse scandal, the league also recently hired Cynthia Hogan, a prominent Democratic operative and former counsel to Vice President Joe Biden. According to Politico, Hogan was the “key Senate aide” behind the initial passage of the Violence Against Women Act in 1994.

“The NFL is very active with lobbyists,” says Gregg Easterbrook, a journalist and author of the 2013 book The King of Sports: Football’s Impact on America. “In modern Washington, you don’t buy politicians off — you give them campaign donations, you invite the local congressman to sit in the owners’ box and get them announced at the games. [They want people to think], ‘Look at the senator, sitting next to the owner! Look how important they are!’”

Coburn acknowledges the vested interest of his colleagues. “How many different pro teams are there, and how many senators are from those states?” he asks. NFL teams are  located in 22 states, so there are 44 senators with a powerful entity at home. That “makes it pretty hard to change something.”

Still, the NFL’s recent failures may push the league to finally act. Easterbrook says: “Given all the PR problems that the NFL has — we could spend all day listing them — I find it puzzling that they wouldn’t say, in order to prove that they are concerned about what the public thinks, ‘We’re asking Congress to revoke our nonprofit status.’ That would be great public relations.”

When asked whether the NFL was considering dropping its tax-exempt status, the NFL’s McCarthy declined to comment.

Coburn is hopeful that even if Congress won’t take the right steps, the league might. “This isn’t big money to the NFL,” he says. “I hear they are thinking about getting out of it like MLB. It certainly doesn’t smell good or look good when you pay the head of the nonprofit $44 million a year. These guys don’t need this.”

Patrick Doyle is a freelance writer and editor living in Pittsburgh. Reach him at patrickcdoyle.com.