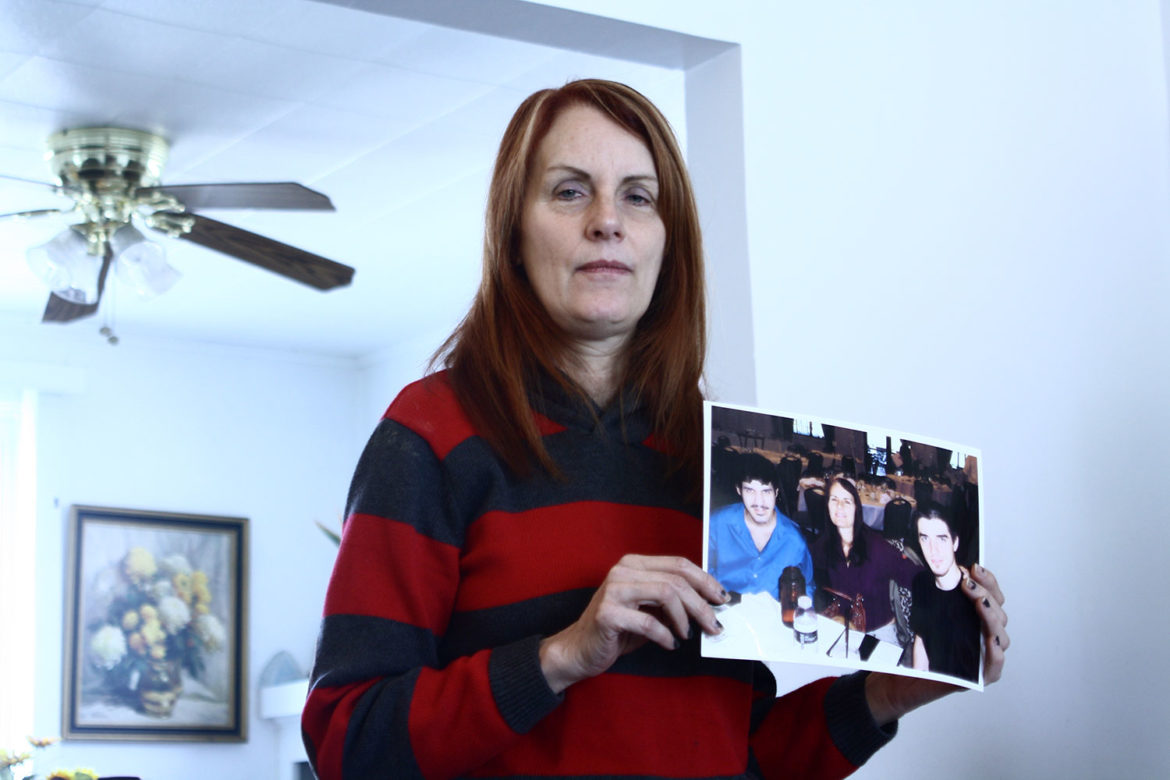 Rarely is there so much tension — or so much at stake — around giving someone hope for a family reunion as in the case of Dominic Pantoni.

Every month, Dominic intently waits at the door of his group home for his mother to arrive, and he immediately asks her, “When’s the next hearing?”

A court hearing, in Dominic's eyes, means going home, or at least leaving a place that he calls prison, said his mother, Nancy Pantoni. She has been trying since 2010 to change legal guardianship of her 27-year-old son, who has intense special needs because of a genetic disorder.

However, it’s that obsession with going home that his guardian, a caseworker with Jewish Family & Children’s Service of Pittsburgh, asserts in court record may be holding back the young man from coping with the 24-hour care he needs and taking opportunities to work or to socialize.

As a result, Pantoni’s interactions with Dominic have been restricted by the guardianship agency, which declined to comment on the specific case because of privacy concerns.

She can visit for one hour a month. No phone calls. And she said she’s not informed when he’s admitted to the hospital or his medications have changed.

Does your loved one have a court-appointed guardian? Share your experience.

Are you or have you served as a guardian? Tell us what you've seen.

Pantoni, a divorced mother of three, filed for bankruptcy connected to her efforts to regain some semblance of control in her son’s life. She said she feels decisions made by the guardian have been detrimental.

“His health has significantly deteriorated so much that I’m concerned for his life,” she said. “I’m on a mission to save my son’s life, I really am. I’ll do anything.”

The tug of war over Dominic’s fate highlights the challenging dynamic of court-appointed guardianships, which often pit an unknown third party assigned to make decisions in the best interest of a ward against family members who inherently feel they know what’s best for their relative.

Guardianships are a necessary arrangement for many people who are unable to make personal or financial decisions, such as an elderly person with dementia, a person with a developmental disability or someone who suffers a traumatic brain injury.

There is little information about the number of people in guardianships in Pennsylvania because of scant monitoring.

More than 2,800 guardianships were established each year between 2010 and 2012 in the state, but it is unclear how many remain active at any given time, according to a report by the Center for Advocacy for the Rights and Interests of the Elderly (CARIE), a Philadelphia nonprofit.

And, Pantoni has no way of knowing how successful others have been in contesting a guardianship through a review hearing, which will be held in her case on May 2. No one agency is responsible for tracking such hearings or the results and costs of the litigation.

A state Supreme Court task force is in the process of studying the guardianship process and how it should be monitored, among other elder-law issues. The task force is expected to complete its research in April and subsequently prepare a report with recommendations, said Amy Kelchner, a spokesperson for the Administrative Office of Pennsylvania Courts.

As an infant, Dominic had heart problems and trouble feeding. He was behind on every milestone — sitting, crawling, walking.

A doctor suggested a blood test that showed Dominic was one in 4,000 children born with 22q11.2 deletion syndrome.

People with the disorder are born missing a tiny segment of DNA on one of their 22nd chromosomes, according to staff at the 22q Center of Nationwide Children’s Hospital in Columbus, Ohio.

Each person is affected differently. Children with the syndrome may have heart defects, palate differences and learning or developmental delays. Some people never know they have it until they have children. Mental illness affects about 30 percent of people with the disorder, the 22q Center staff wrote in an email.

Dominic’s mental health problems escalated in his late teens, said Pantoni, 55. He thought people were plotting against him. He became destructive.

A neighbor in the family’s apartment building in Dormont, southwest of Pittsburgh, complained about the outbursts and reported that Dominic had thrown a rock at her door. The landlord said he could no longer live there.

The eviction led to a series of temporary homes for Dominic. He would run away from facilities where he lived among senior citizens. He couldn’t manage on his own at a Brookline apartment. And a motel for $80 a night wasn’t appropriate or affordable.

Dominic was on a waiting list for a state waiver that would have paid for the services and living situation he required, but the family had no clue when it would come through.

A social worker suggested guardianship because an agency could find him housing right away.

“I didn’t feel like I had any other choice at the time, so I went along with it,” Pantoni said. “I was assured I would have regular, frequent visits and that I’d be part of the decision-making.”

Jewish Family & Children’s Service, a nonprofit agency, was appointed guardian of Dominic in July 2009. The agency was looking after 123 wards at the time of its 2012-2013 annual report. Its guardianship department is composed of a director, three caseworkers and a fiscal assistant.

Traditionally, parents are named as guardians of their special-needs children who are becoming adults, said Diane Menio, executive director of CARIE. A lack of resources and state funding has created waiting lists to assistance for people with intellectual disabilities or mental health needs.

“No one should have to go to this extent to get services,” Menio said.

To Pantoni’s dismay, Dominic’s waiver was granted about two months after the guardianship was established. The Social Security Administration is investigating the alleged embezzlement of funds from a Cambria County guardianship agency, which handles the finances of incapacitated people under its care.

Is it reasonable to cut phone calls and visits between this mother and her adult child?

Should the guardian have gotten another opinion on the progression of Dominic’s kidney disease?

Were the concerns over cleanliness and safety at the group home properly addressed?

These are questions a judge has been asked by Nancy Pantoni to consider in upcoming hearings to assess whether the guardian has acted in accordance with the law or in Dominic’s best interest.

The guardianship agency provided PublicSource with this statement: “Jewish Family & Children's Service recognizes the many complexities that exist when working to ensure the best possible care for wards under guardianship. JF&CS has the utmost compassion for everyone involved in the process.”

In annual reports filed in court, the guardian expresses concern about Pantoni’s focus on taking Dominic home and how it affects his development.

Pantoni recognizes that she is what they call “an interfering mom.”

As a nurse for 15 years, she has certain views on the diet he should be on —  not the fast food and microwave meals she has seen him eat — and she takes issue with the host of medications he is prescribed. She believes the drugs are ineffective and lead to serious side effects, including kidney disease and a permanent muscular disorder.

“Ideally, I would like to be his guardian,” she said, “and if that’s not possible, at least have a guardian who will cooperate and honor family choices.”

Pantoni searched two months before finding Matthew Lovewell, a Pittsburgh attorney who focuses on guardianship issues. He agreed to take her case.

After draining her life savings on failed legal attempts to get her son out of guardianship, a friend loaned Pantoni $3,000 for a retainer. She hopes to pull together $6,000 more through donations.

Menio of CARIE said the cost deters most people from contesting guardianships. “It doesn’t happen as often as it should because people simply can’t afford to.”

Advocates in this realm also say few guardians are replaced unless there is an outright wrongdoing, such as theft.

Menio said this can sometimes be attributed to asking the very judge who chose the guardian to reverse the decision.

Elaine Renoire, president of the National Association to Stop Guardian Abuse, said disagreements over care rarely make a difference. “The guardian doesn’t stand alone in care issues,” she said. “A doctor is on the case, writing the orders and approving treatment.”

Guardianship began as a safety net for the Pantoni family. Now, it’s an obstacle.

“It’s shattered my whole life,” Pantoni said, “so of course I’m going to give my son hope. The hope of him being with his family is the only thing keeping him going, I think.”