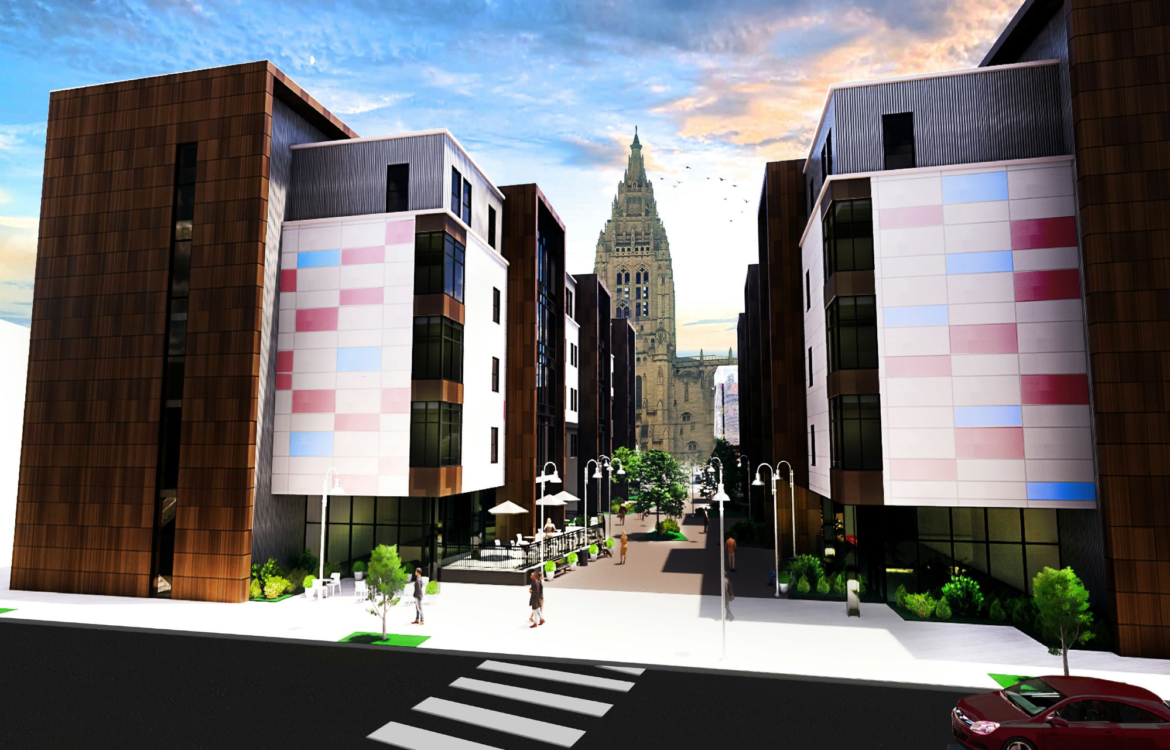 A rendering from Catalyst Communities, a developer candidate for the URA's South Beatty Street redevelopment project. (Image from the URA)

The Urban Redevelopment Authority [URA] presented three potential designs Thursday night for an East Liberty development meant in part to bring some former residents of the demolished Penn Plaza back to their neighborhood.

But some attendees raised pointed questions about the community input process, which they felt excluded them.

“The problem is ‘the community’ is the Village Collaborative,” said Celeste Scott, housing organizer at Pittsburgh United, referring to a community group that has had early involvement in the URA’s vetting process. “That is the problem that they’re not giving an answer to.”

A group of former Penn Plaza residents and community activists questioned why the URA had chosen Village Collaborative, a community group unveiled last year by the HELP Initiative. The collaborative is made up of faith leaders in the East End. City Councilman Rev. Ricky Burgess, who attended the meeting, helped come up with the idea to form the collaborative.

The URA called for a developer to build affordable housing, parking and commercial space on South Beatty and Mignonette streets. The land near the Ace Hotel and the Carnegie Library of Pittsburgh’s East Liberty branch currently include two parking lots. The URA, the City of Pittsburgh and the Pittsburgh Parking Authority own parts of the development site.

Village Collaborative was part of a review committee to select the proposals, along with appointees from Mayor Bill Peduto’s office, local elected officials, the Parking Authority and the East Liberty Chamber of Commerce. The committee helped narrow down 10 developer proposals to three candidates, who pitched their plans at Thursday’s public meeting at Eastminster Presbyterian Church.

Village Collaborative will also facilitate future meetings regarding the project and a new comprehensive plan for the next 10 years of development in East Liberty, said Pam Collier, project director for the HELP Initiative.

Burgess said critics at the meeting did not represent the community. He said he didn’t know who some of the attendees were, and that many members of Penn Plaza Support and Action were activists who did not live in East Liberty.

“He buried my grandmother!” Hoots, who was active with Penn Plaza Support and Action, said of Burgess, who is pastor at Nazarene Baptist Church. “He knows the whole group.”

A lot of East Liberty residents were supportive of Penn Plaza Support and Action, Hoots said, but many did not show up to the URA-led meeting because they did not think it would do any good.

“The main thing is I believe a lot of people think nothing’s going to happen,” he said.

Rev. Randall Bush, senior pastor at East Liberty Presbyterian Church, said at the meeting that his church had misgivings about the URA’s process to determine the specifications for the project’s request for proposals [RFP]. He said his church is not part of  Village Collaborative.

“Our concern is the entire RFP doesn’t look at the bigger picture at what our needs are in East Liberty,” Bush said. “That shortsightedness makes any solutions the developers suggest as inadequate.”

URA staff at the meeting did not directly answer questions from the audience on how Village Collaborative was chosen to be an early partner in the project. Burgess said after the meeting that the group had applied to be the area’s registered community organization, an official city designation created by a new ordinance Burgess spearheaded in the City Council last year.

Penn Plaza Support and Action did not apply for RCO status. It is not a nonprofit organization, a requirement for the program.

The three teams that the URA’s committee selected were:

All of the developers said they  plan to apply for Low-Income Housing Tax Credits to help finance below-market units and additional financing from the Housing Authority of the City of Pittsburgh.

The presentations can be found on the URA’s website.