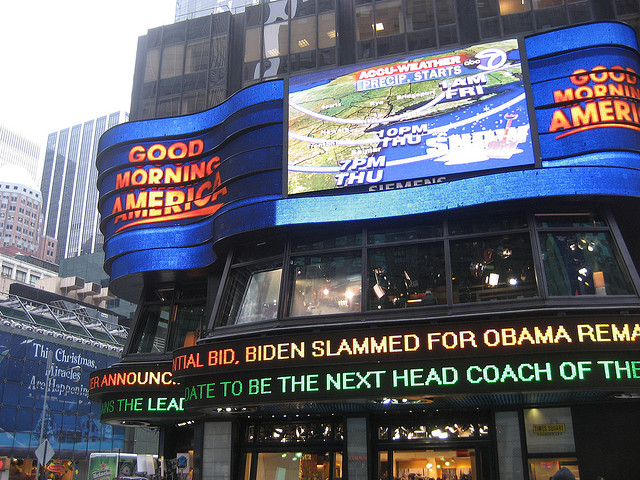 The national morning television shows, “Good Morning America,” “Today,” and “CBS This Morning,” were the most popular shows for ads in U.S. Senate races during this election cycle.

ABC’s “Good Morning America” was the most popular show with nearly 30,000 ads, followed by 27,000 for “Today” and 25,000 for “CBS This Morning,” according to analysis by The Center for Public Integrity using data from ad tracking firm Kantar Media/CMAG.

In all, political candidates and groups aired more than 1 million U.S. Senate race-focused TV ads alone ahead of the 2014 midterms, as Republicans this month seized control of Congress' upper chamber.

Republican candidates and their supporters were much more likely than Democrats to buy ad time on "Wheel of Fortune," "Big Bang Theory," "Nightline," "NBC Nightly News with Brian Williams" and the "CBS Evening News with Scott Pelley."

In the Pennsylvania gubernatorial election won by Tom Wolf, PublicSource tracked more than 28,500 ads in the state that cost Wolf and Gov. Tom Corbett a combined $19 million. Wolf and Corbett spent the most money in Philadelphia, more than $7 million combined, and aired the most ads in Harrisburg, more than 5,500 combined. The candidates spent nearly $4.4 million on ads in Pittsburgh.

Pennsylvania was also one of the busiest states in the country for ads in state races such as the governor’s contest and state legislators. Pennsylvania ranked fourth, with candidates spending $60 million on ads, according to The Center for Public Integrity. Candidates only spent more on ads in Florida, Illinois and Texas.