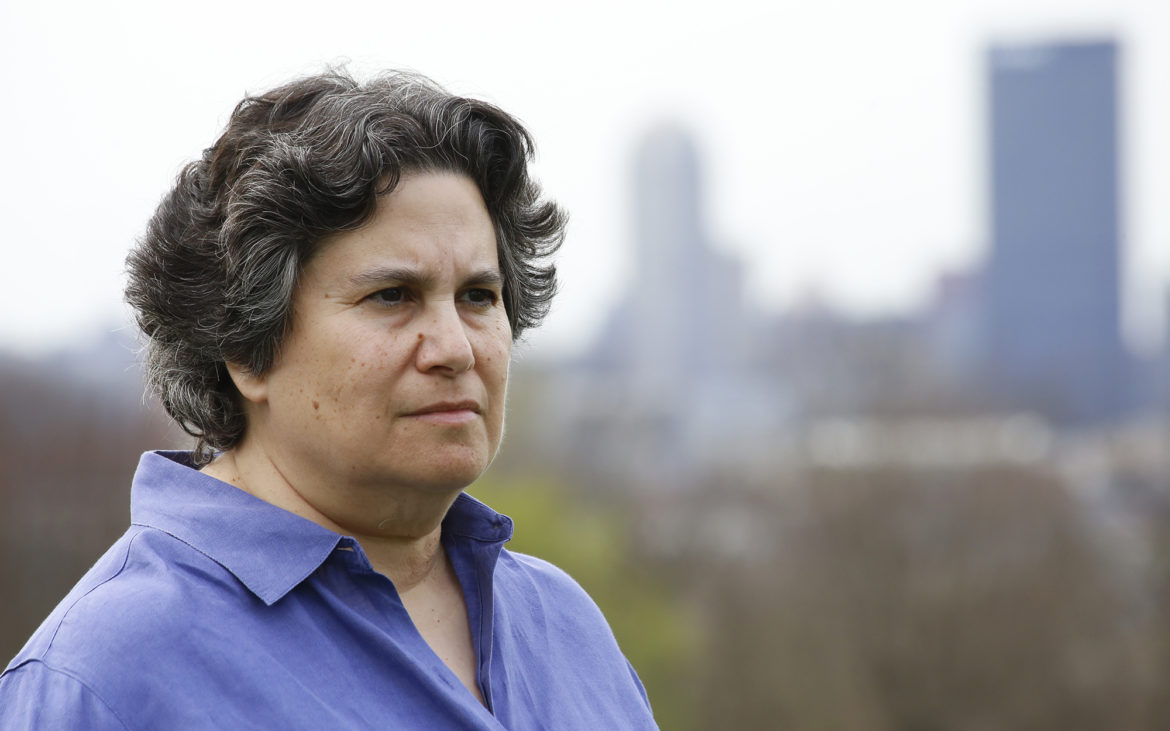 Harriet L. Schwartz is a professor at Carlow University and author of the forthcoming book “Connected Teaching: Relationship, Power, and Mattering in Higher Education.” (Photo by Ryan Loew/PublicSource)

White Pittsburgh, the time is now and the responsibility is ours. We must work to identify, confront and dismantle our own racism and that embedded in our organizations and systems. We must strive to uncover and undo the implicit bias that is marginalizing, limiting and killing our neighbors of color. And we must support only those political candidates who stand for racial justice. The time is now and the work is ours.

The editor deleted “white” from a letter about race, and in doing so, erased the very essence of the message. I left several voicemails and emails for executive editor Keith Burris, first asking for a correction and later inviting comment for this article. He neither responded nor published a correction.

I wrote the letter after attending a community gathering in The Hill after the acquittal of Michael Rosfeld in the killing of Antwon Rose II. As I wrote the above letter and as I write this, I’m thinking of both the discrimination and hate faced by all Pittsburghers of color and that specifically directed toward Black people in the region. Further, I don’t imagine my writing will convert racists, but rather I have in mind those white people who don’t pay much attention to race, think it’s not their problem or find the problem overwhelming, so do nothing.

Why is it so important for white people to address racism in our region?

The work of confronting racism has historically been left to people of color. As such, the very people who are oppressed hold the responsibility of transforming the power structures that subjugate them. Imagine lying on the ground with someone’s foot on your neck and you alone are left to overpower your aggressor.

Racism hurts us all. We may think we can ignore racism, but I suggest we feel it — we know it’s there and we know it’s wrong. We drive through Homewood or the Hill District and see abandoned houses and crumbling streets. We read that 80 percent of owner-occupied housing units in Pittsburgh are white-owned while just 16 percent are Black-owned. We know the K-12 achievement gap is a resource gap. We cannot fully enjoy our lives and be the people we aspire to be until our neighbors of color experience the same safety and freedom we take for granted.

As white people in this region, we must ask ourselves:

Do I try to understand the daily experience of people of color?

Do I tolerate racist comments?

Do I fail to notice subtle but impactful discrimination in our schools, workplaces and communities?

Do I care about these issues but feel unable to act?

Racism is prejudice backed by power

Racism is manifest when people and systems intentionally promote or quietly allow interactions, actions and policies that limit the opportunities, access and well-being of others based on skin color, according to Cory Collins and Robin DiAngelo who write about racism and privilege. And, as we know all too well, racism and other forms of identity hate can mean the difference between life and death.

People with power have a particular responsibility to address racism. Pittsburgh Pirates’ general manager Neal Huntington recently took a stand, calling out those who stereotype athletes of color as lazy, unmotivated and gifted physically (but not intellectually) and white players as smart and competitive. Huntington’s comments won’t end racism in sports, but he interrupted a long-standing racist practice and moved the needle just slightly.

Many white folks believe they aren’t racist and the problem isn’t theirs, claiming, “I don’t tell racist jokes” or “I don’t make hiring decisions.”  Not being actively racist does not excuse us from confronting racism. If we walk past a smoldering trash can and do nothing, we share the blame if the block burns down.

I challenge all of us to live out our non-racist intentions by becoming anti-racist, by seeking to understand how we can more effectively address everyday racism, how we unknowingly help systems maintain their exclusionary and sometimes deadly practices, and how we can work toward change.

For those new to anti-racism work or looking for foundational resources, I recommend watching and/or reading:

To continue learning, check out:

Contact elected officials and advocate for any of the recommendations proposed by The Pittsburgh/Mon Valley Black Women’s Roundtable and other relevant changes.

Finally, seek and foster cross-racial friendships. Our city is highly segregated. This is something each of us can seek to change. By connecting across racial lines, we broaden our world and build collaborative energy that takes a stand for racial justice. Indeed, we are stronger together.

White Pittsburgh, the time is now and the responsibility is ours.

Editor's note, April 12: The current version of the essay has 'white' in lowercase. The author asked it to be changed after reading feedback from a reader.

Harriet L. Schwartz is a professor at Carlow University and author of the forthcoming book “Connected Teaching: Relationship, Power, and Mattering in Higher Education.” Learn more at www.harrietschwartz.com. Special thanks to Lisa Eible who reviewed an early draft of this article.