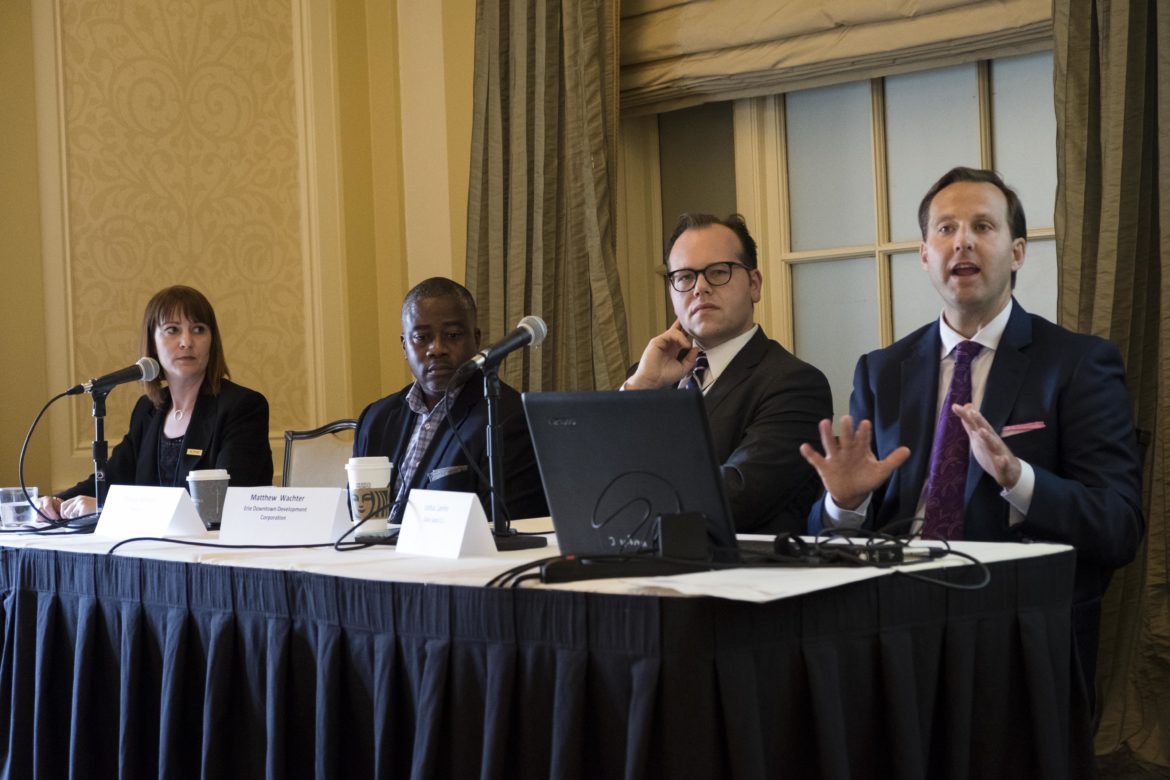 Opportunity zones, a federal tax incentive touted in the Trump administration’s federal tax overhaul, are intended to spur investment in low-income communities. But how they’ll actually work in deals that could involve other development incentives still feels like “the wild west.”

“We still don’t have anything set in stone from the government,” Jeni Cooper, a vice president at PNC Bank, said during a Wednesday panel discussion at the Community Development Summit in Downtown Pittsburgh.“We have guidance, which is great, but nothing’s set in stone about which direction you have to go here” to build the most competitive project that can entice investors.

Among the unanswered questions is whether local governments could leverage Community Development Block Grant money from the U.S. Department of Housing and Urban Development for projects that use opportunity zone funding.

Created under Republican-backed Tax Cuts and Jobs Act in December 2017, opportunity zones allow for investment banks and other entities that make money off capital gains — typically hedge funds and other large private investors — to move that income into a fund designated for business and development projects in census tracts that have a disproportionate number of low-income residents. In exchange, the investor can bypass federal taxes on the original capital gains after several years.

For example, if an investor sells a stock and makes money off the sale, instead of paying a federal 20% tax on their profits, they can invest the profit in a fund designated for an opportunity zone. After several years, they could not only make money off the investment but also get a lower tax rate on the original profit they put into the fund.

Opportunity zones don’t include every low-income area identified by the U.S. Census. Congress gave governors of each state the power to nominate as much as 25% of low-income census tracts. Out of 1,200 eligible tracts across Pennsylvania, Gov. Tom Wolf last year nominated 300 tracts that were approved by the Treasury Department in June.

Joshua Lavrinc, CEO of Callay Capital, a firm that consults in capital financing deals, said areas designated locally are competing for investment with opportunity zones all over the country. In the Pittsburgh area, the zones are located in neighborhoods outside Downtown and towns that may not have large-scale properties to entice major private investors.

“Cleveland and Detroit, their entire downtown area is an opportunity zone,” Lavrinc said on the panel. “So if you’re an institutional investor…and you can invest in Cleveland’s downtown, you’re probably going to look there before you would start to look at our fringe markets.”

Opportunity zone tracts in the Pittsburgh area do include some areas near Downtown, like the Hill District and Uptown. Other designated areas include Beltzhoover, Carrick, Homewood and parts of the West End and North Side.

For Pittsburgh to draw major investors like hedge funds, businesses and developers will have to try to pair it with other incentives — for instance local tax abatements — to show that a deal is a worthwhile investment, Lavrinc said.

And while opportunity zones are billed as a way to entice development in low-income areas, how they’ll impact local neighborhoods is an open question.

Lavrinc noted that the federal law does not include reporting requirements for investors or businesses to show how their projects are benefiting the local community.

And it’s unclear, he said, whether small communities outside major cities will see new investment as a result of opportunity zones when there’s little local capital to potentially build on.

PNC is one financial institution that has invested some of its own capital gains in deals that use opportunity zones. The bank completed four deals last year that used the program as part of its financing, Cooper said, including a coworking and event space in Detroit. PNC has incorporated the opportunity zone program with its Community Reinvestment Act work, a separate federal program that requires commercial banks to fulfill a certain level of service to low- and moderate-income communities.

“It’s great to be handed a new tool to see some projects happen that we wouldn’t otherwise see coming together,” Cooper said.