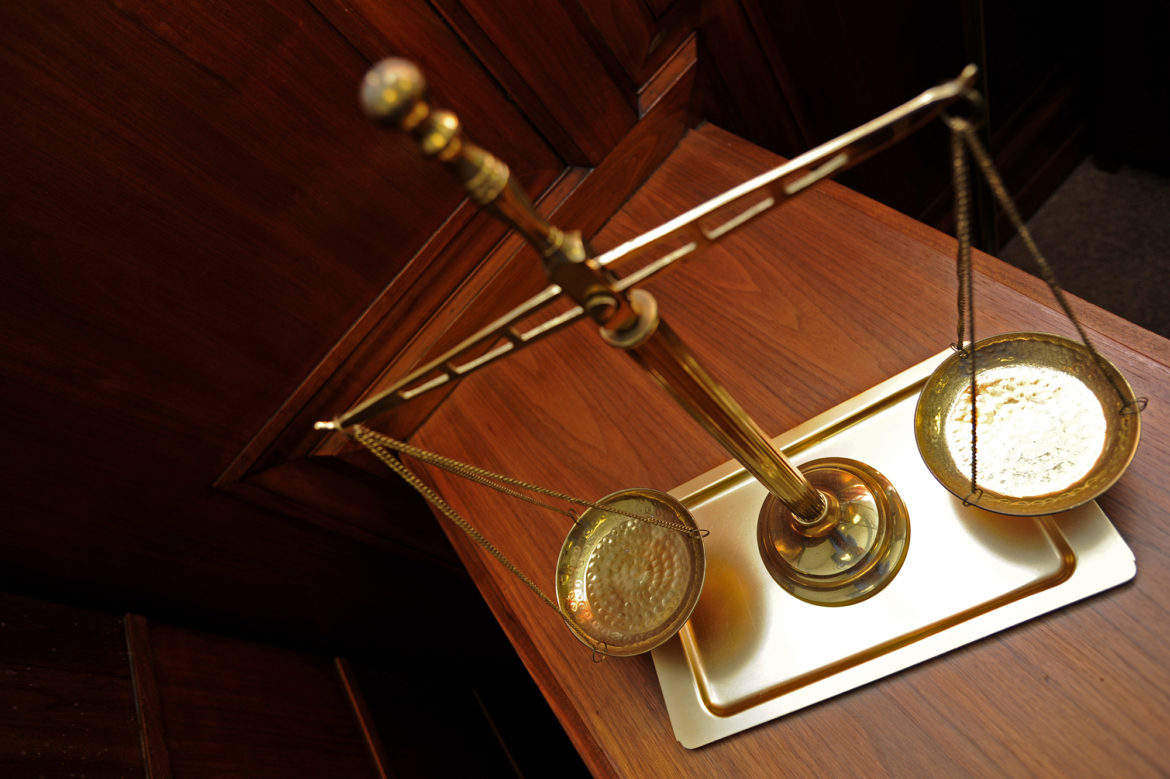 A judge's desk in an Allegheny County courtroom. (Photo by Connor Mulvaney/PublicSource)

The Pennsylvania attorney general is the state’s top lawyer. The office can bring down drug rings, investigate public corruption and it defends the state when it is sued.

The attorney general is also a political figure, working with the governor and the Legislature to reform state drug laws, its prison system and to combat the state’s heroin epidemic.

Most of the modern, elected Pennsylvania attorneys general have been former prosecutors — either district attorneys or U.S. Attorneys. Television ads that mention a candidate is tough on crime can reinforce the perception that the attorney general’s job is to put criminals behind bars — almost like a statewide district attorney.

On April 26, voters in both parties will have a choice for attorney general. Do the voters prefer a candidate with political experience or a candidate who’s been a prosecutor?

The attorney general, in essence, runs a large law firm with broad scope that includes investigating drug traffickers, Medicaid fraud and prescription drug abuse. The office works on criminal, civil and consumer protection cases and has 830 employees in offices across the state, according to the latest figures provided by the attorney general’s office. More than half of those employees work on criminal cases.

The attorney general rarely appears in court, but makes key decisions on major cases, assists in local and federal investigations and meets with legislators and constituents on a regular basis, according to Walter Cohen, who served as first deputy attorney general over six years and then as acting attorney general for several months in 1995.

The criminal division investigates drug trafficking, child predators (more than 150 were arrested each of the past two years), organized crime and public corruption, according to the office’s 2015 annual report.

An example of a prominent public corruption case the AG’s office was involved in was last year’s discovery that former Harrisburg Mayor Stephen Reed bought thousands of historical artifacts with millions of taxpayer dollars.

The attorney general's office can also supersede a local district attorney if they can prove that the DA did not pursue a case he or she should have. The office is considering if they want to intervene in the case of a February Philadelphia bar fight that may have involved Buffalo Bills running back LeSean McCoy. Philadelphia District Attorney Seth Williams declined to prosecute the case.

The attorney general’s office also defends the state when it is sued and can represent state agencies when they are named as a defendant in a lawsuit.

The office also has a unit that pursues antitrust claims, environmental hazards, and investigates consumer and healthcare complaints. For instance, last year the attorney general opposed the merger of Hershey Medical Center and the PinnacleHealth System, arguing that merging the region’s two largest healthcare providers would harm patients. The most frequent consumer complaint is about the Do Not Call list, which is a registry meant to limit telemarketing calls.

Perhaps one surprising aspect of the office is that the attorney general rarely steps inside the courtroom.

Cases such as former attorney general Ernie Preate arguing Planned Parenthood of Southeastern Pennsylvania v. Casey in front of the U.S. Supreme Court are rare. This was the 1992 landmark abortion ruling that upheld the basic tenet of Roe v. Wade that a woman has the right to an abortion. It established a new “undue burden” test, which struck down part of the Pennsylvania law which required wives to notify their husbands before getting an abortion.

Preate, who was attorney general from 1989 to 1995 before serving 11 months in a prison camp for mail fraud, said that as a Republican, he took great pride that Democratic Gov. Bob Casey entrusted him to argue that case, even though Casey “kicked my teeth in on the campaign trail.”

As a former district attorney, Preate said he learned a lot that prepared him to be attorney general, but also had to learn on the job.

Major cases and important decisions get pushed up the chain of command for the attorney general to have the final word.

However, there are plenty of problems and questions that get solved or answered without the attorney general’s knowledge.

“Which is probably pretty much like how any business or any government office would operate,” Cohen said.

While Preate talked highly of being a district attorney, he felt that leadership experience was attainable from many places.

“Wherever you can get executive responsibility it's really important that you can get it,” he said. “Whether it's in the Army, or Marines, or in business or running county government.”

Five candidates, three Democrats and two Republicans, are running to succeed Democratic Attorney General Kathleen Kane. She declined to run for a second term after being charged with perjury and obstruction of justice, among other crimes, and had her law license suspended by the Pennsylvania Supreme Court.

To become attorney general, you have to be able to practice law in Pennsylvania, be at least 30 years old and have lived in Pennsylvania for the past seven years (exceptions for politicians and public employees).

Of the five candidates, there are two politicians and three with extensive experience as prosecutors.

Democrat Josh Shapiro and Republican John Rafferty, the two politicians, are trying to convince voters to take a broad view of the attorney general’s office.

“To view this office as just another DA or super-DA...unfortunately and unnecessarily limits the scope of what this job is really all about,” Shapiro said at a April 13 debate at Widener University’s Commonwealth Law School in Harrisburg.

Shapiro is the chairman of the Montgomery County Board of Commissioners and was appointed to be the chairman of the Pennsylvania Commission on Crime and Delinquency [PCCD] by Gov. Tom Wolf about a year ago. The PCCD coordinates criminal and juvenile justice reforms across multiple state agencies and provides grants for substance abuse education, to support crime victims and people with mental health issues.

Rafferty has 13 years of experience as a Pennsylvania state senator from the 44th district, which spans portions of Berks, Chester and Montgomery counties. He began his legal career investigating Medicaid fraud in the attorney general’s office. He likened his experience to that of former Attorney General Mike Fisher, who served in the state senate for 16 years before being elected attorney general in 1996.

The two longtime Democratic district attorneys in the race — Allegheny County DA Stephen Zappala and Northampton County DA John Morganelli — have run their offices for 18 and 24 years, respectively. They have been emphasizing the criminal law aspect of the office.

“I think you have to be a prosecutor. As district attorney, our forum is the courthouse. Our forum is the streets. The criteria we use is facts, and we use evidence,” Zappala said at the Widener debate.

Morganelli is currently the longest serving district attorney in the state, and this is his fourth try at becoming attorney general.

“You need to have good legal experience and the district attorney’s office is the breeding ground for that experience,” Morganelli said.

Republican candidate Joe Peters was a Scranton police officer, an organized crime and drug prosecutor in the attorney general's office for 15 years, a federal mafia prosecutor and oversaw a White House drug trafficking program. He most recently served as Kathleen Kane’s spokesman for about eight months in 2013 and 2014.

“We are electing the chief law enforcement officer,” Peters said at the Widener debate. “It's that way in the Commonwealth Attorneys Act. It's that way in the perception of the public… We need the most experienced person who can walk into that office and lead it on day one.”

One thought on “What does a state attorney general actually do?”