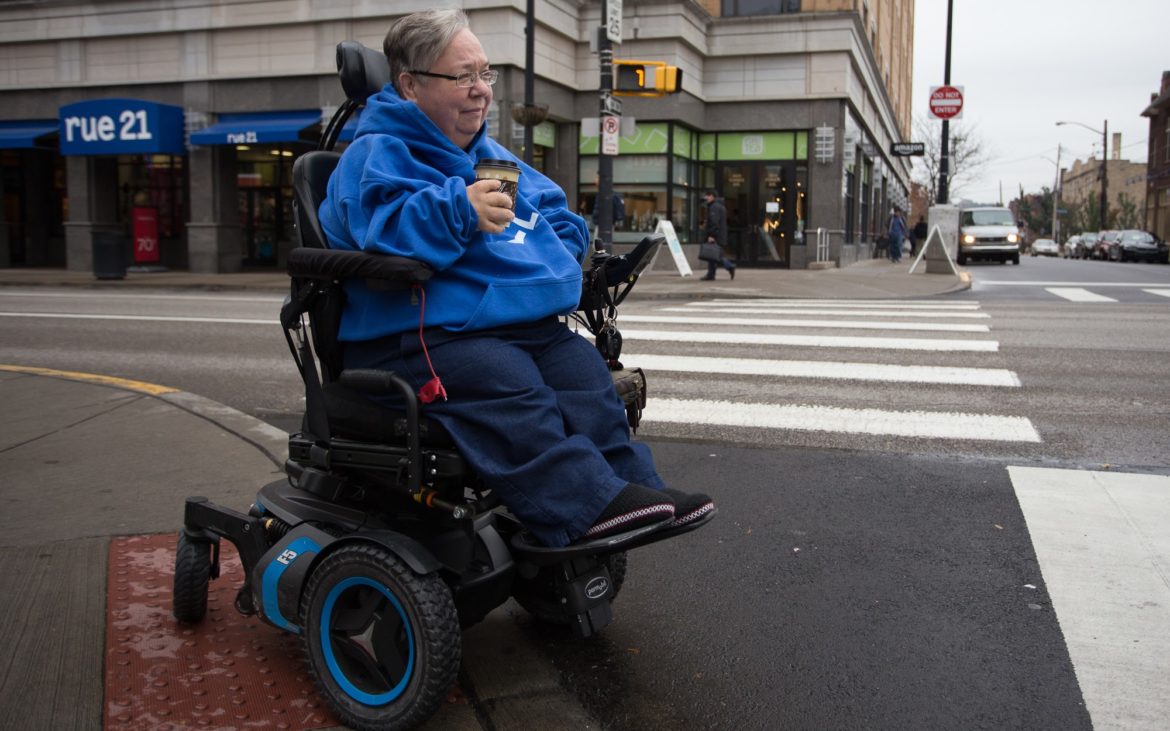 DJ Stemmler waits for a crossing signal at the corner of Forbes and Oakland avenues. (Photo by John Hamilton / PublicSource)

Adequate access is all DJ Stemmler, who uses a wheelchair, wanted from the new build-your-own sushi restaurant near her Oakland office.

One thing that Ting Yen, the restaurant owner, wanted was for Stemmler to stop writing online reviews saying his restaurant was inaccessible to people with disabilities.

As the two stared at each other from across a table at the 2013 inaugural meeting of Stemmler’s advocacy group, Accessible Oakland, it seemed for a moment that the gap wouldn’t be bridged.

It seemed impossible to Yen that his restaurant, Sushi Fuku on Oakland Avenue, could still be inaccessible after the renovation he just put it through — complete with a lower counter, adjustable furniture on wheels and an accessible bathroom.

But what didn't occur to him was that the single concrete step at the front entrance immediately sends a message to anyone in a wheelchair that this isn’t the place for them.

The Americans With Disabilities Act [ADA] passed nearly 30 years ago, requiring buildings to become accessible to people with disabilities, whether with automatic doors, grab bars or ramps, among other accommodations. Decades later, ADA compliance remains spotty, especially in many of the older buildings that fill Pittsburgh's bustling business districts.

There appears to be a basic disconnect between policy and reality on the issue of accessibility. While building codes require updates in accessibility during any business renovation, it does not narrow in on the most obvious barrier — a step or steps to the front door.

To address the issue, the Pittsburgh city council approved the One Step program in summer 2011 to streamline the process for any Pittsburgh business to remove entryway steps. The city issued the first permits to participating businesses in fall 2015.

Pittsburgh ADA Coordinator Richard Meritzer said the program was meant to simplify the process and to reduce fees for building owners to add ramps, but not necessarily to make the process faster.

“One complaint we got from developers and architects was that most expensive part of the process was coming down to the city offices and paying for parking and waiting in line,” Meritzer said. By making a one-size-fits-all application, they could send in an application with a single email.

The program still results in delays and frustration for business and disability advocates. In two years of permitting, the program has moved 15 businesses through the permitting process and their steps have been removed; another 14 businesses are waiting, including Yen at Sushi Fuku.

Until he can install a permanent solution, Yen is using a temporary ramp to open up the restaurant to people with disabilities. It’s not ideal, but it was enough for Stemmler to become a regular there. Maura Kennedy (center), the city of Pittsburgh's director of Permits, Licenses and Inspections department, speaks at a panel on ADA compliance hosted by the Oakland Business Improvement District on Nov. 2, 2017. She says the city is engaged in outreach to try and explain ADA standards to business owners. (Photo by Stephen Caruso/PublicSource)

Building the ramps often means encroaching on sidewalks, which are city property, and requires extra permitting. And if the sidewalk is a little too narrow or a street light stands near the entrance, a well meaning property owner could bounce between the city and the state seeking approval.

Pittsburgh doesn’t write its own building codes. The codes are inherited from the state and don’t allow cities to make changes or prioritize certain fixes, like removing front steps, said Maura Kennedy, director of the city’s Permits, Licenses and Inspections department.

She added that the city is working on outreach and is doing as much as it legally can under Pennsylvania state law.

“We are very rigorous in administering it. We take that responsibility very seriously. I know the advocate community and many wish we could go further, but we are zealously playing the part that we can here,” Kennedy said. “The code is written, and if we don’t administer it to the standard, it would be inappropriate for us.”

Meritzer said the city plans to release a list of accessible Pittsburgh businesses to the public by the end of 2017.

“Over the past four years, we have utilized the Summer Youth Employment Program to field evaluate every business in business districts throughout the city to identify which ones have accessible entrances,” Meritzer wrote in an email. More than 900 businesses were surveyed.

For now, the best estimate comes from age. According to Allegheny County property records, the average Pittsburgh building was built in 1940 — 50 years before the passage of the ADA. Looking at the survey results, Meritzer said East Liberty and South Side seemed comparatively accessible, while he was surprised by Oakland’s lack of accessibility. Sushi Fuku on Oakland Avenue has a portable ramp to allow someone in a wheelchair to enter the restaurant. (Photo by John Hamilton / PublicSource)

According to landlord Peter Leventis, Yen’s building is at least 80 years old. During Yen’s renovation in 2012, he was only vaguely aware of the ADA. All he knew is he had to spend 20 percent of his budget on accessibility upgrades. The ADA prioritizes the removal of barriers to entry, but Pennsylvania state code doesn’t reinforce or require it.

Despite working with an architect, a contractor and passing a city inspection, Yen said nobody pointed out that the step outside is an ADA violation that could result in a federal complaint.

Peter Margittai, a Pittsburgh architect who handled Yen’s renovation, said it is not uncommon to see renovations that comply with code 100 percent, but do not satisfy ADA requirements.

“When you are born with a not-perfect body, you get used to working with not perfect.”

Even if it seems unreasonable for a store to add an accessible bathroom behind an inaccessible step, Margittai said the change is made with the expectation that future renovations will eventually address the step with a ramp or chair lift.

“It doesn't make sense, but there is logic behind it,” Margittai said. “In Pittsburgh, to do a project in a 100-year-old building is not unique. So it’s very likely that building will be around for another 100 years, and those occupants will do construction projects, and every time they will have to add 20 percent.”

It was only when Yen heard Stemmler’s concerns at the community meeting that he realized he needed to do something about the step.

The very next day, he went out and bought the temporary ramp. Since then, Yen’s place has become one of Stemmler's favorite restaurants. Her usual is the Oakland Avenue Roll, with chicken and cucumber wrapped in seaweed and a sauce so good she says she could drink it. She visits the restaurant as often as possible, sometimes with friends.

But more than that, Stemmler says the way Yen responded helped her feel welcome.

“It’s home for me. There isn’t any other place in Oakland that feels that way to me,” she said.

Yen applied to the One Step program in May. He said he put off considering the installation of a permanent ramp until he found a matching grant program through the Oakland Business Improvement District to help fund the ramp.

Just a few days ago, Yen received approval for the first part of the process, but he said he was also told his application was incomplete.

Architect Margittai, who volunteers with the One Step program, said he’s found the program mostly helps those who are unfamiliar with the permitting process. For the average person, handing in a form and waiting may seem more convenient. But as a professional, he feels he could have moved through the permitting process much more efficiently.

“If I was doing it myself, I could have it done it in a week or two,” he said. “I don’t think the One Step program is functioning as intended.”

Henry Schwartz, an Oakland property owner, is also trying to add a ramp to his property along Forbes Avenue inhabited by Noodle House, an Asian restaurant.

After renovations, Noodle House, like Sushi Fuku, opened without a ramp. Stemmler noticed and filed a complaint with the federal government — one of 15 complaints she has made to the U.S. Department of Justice regarding ADA compliance in Pittsburgh. Of those complaints, Stemmler estimates 10 have been for Oakland businesses. DJ Stemmler, 56, is the co-founder of Accessible Pittsburgh, a group that advocates for people with disabilities. The group was originally Accessible Oakland. (Photo by John Hamilton / PublicSource)

When Schwartz was summoned to mediation, he immediately swore to fix the entrance.

That was two years ago. And even with the One Step program, which helped him acquire his permit after a year of waiting, the ramp still isn’t finished. Schwartz has bounced between the city’s permitting office and state appeals board twice regarding the ramp’s handrails and height.

Because of this experience, Schwartz says he’s often recommending temporary solutions to tenants of his other commercial properties to avoid the bureaucracy.

“I encourage our tenants to buy a portable ramp and place a sign in the window to call or ring a bell for access,” Schwartz wrote in an email.

Going forward Stemmler would like to see more permanent accessibility changes to Pittsburgh businesses. Until then, she appreciates any level of access.

“We deal with ‘not perfect’ every day of our lives,” Stemmler said of people with disabilities. “When you are born with a not-perfect body, you get used to working with not perfect.”

Stephen Caruso is a Pittsburgh-based journalist. He can be reached at stephencaruso23@gmail.com. Follow him on Twitter @StephenJ_Caruso.

One thought on “Watch your step: How Pittsburgh businesses can satisfy accessibility rules and still not be open to people with disabilities”