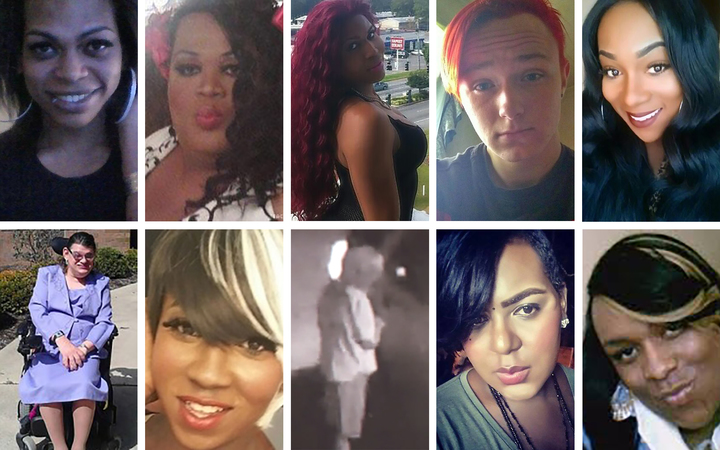 This is only a fraction of the transgender women, many women of color, who have been murdered in recent years, documented by Sue Kerr on the Pittsburgh Lesbian Correspondents blog: (top left to right) London Chanel, 21, of Philadelphia; Keyshia Blige, 33, of Naperville, Illinois; Lamia Beard, 30, of Norfolk, Virginia; Ally Steinfeld, 17, of Houston, Missouri; Rae’Lynn Thomas, 28, of Columbus, Ohio; (bottom, left to right) Betty Janet Skinner, 52, of Cleveland; Kiesha Jenkins, 22, of Philadelphia; K.C. Haggard, 66, of Fresno, California; Tee Tee Dangerfield, 32, of Atlanta; and Brittany-Nicole Kidd-Stergis, 22, of Cleveland. (Photos courtesy of Kerr)

In April 2013, I was horrified to read about the brutal murder of Cemia Acoff, a 20-year-old black trans woman in Cleveland, Ohio. A neighbor found her body in a retention pond, nude from the waist down and tied with a rope to a block of concrete.

What caught my attention was not only the brutality of her murder, but the failure of law enforcement and the Cleveland media to provide fair and accurate information. The police and media repeatedly misgendered Cemia and referenced her by her former name (a practice known as ‘deadnaming’). The media covering her death included her criminal history even though there was no reason to think it relevant to the circumstances. They even used a mugshot instead of photos provided by Cemia’s friends.

The disrespect and harm fuel the larger problem of violence against trans people, especially black trans women in our society. Refusing to follow best practices is both unprofessional and presents a threat to the survivors who must add correcting these errors to their grieving process.

Prior to April 2013, I had considered myself an ally to the trans community. In that capacity, I had attended Trans Day of Remembrance services, blogged regularly about trans neighbors in Pittsburgh and tried to educate myself. But this was different.

I knew that the Cleveland media couldn't care less what a lesbian blogger in Pittsburgh might say in response to their coverage of Cemia’s murder. So while I could add my voice to the resistance, I wasn’t sure it would be of much use.

After listening to the trans community, I realized that I could offer something tangible. I could use my blog to create content that is respectful, uses the proper pronouns and names, and acknowledges the life and death of the victims.

In July 2013, Diamond Williams was murdered and dismembered in Philadelphia. Rinse and repeat with the use of her dead name, a mugshot and revisiting her criminal history.

In December 2013, two trans women from Cleveland were murdered in what were unrelated incidents. Brittany Stergis was 22. Betty Janet Skinner was 52. Betty was also disabled and found murdered in her bed; police still haven’t arrested anyone for her murder.

Collectively, these events propelled me down a path to where I am doing my best to write what I call ‘In Memoriam’ posts about each victim. They aren’t obituaries. They are far from perfect, but I do make every effort to craft posts that reflect what the trans community has been asking for from cisgender allies (cisgender being a term used to describe people who are not transgender, both LGBTQ and heterosexual).

I know it is only a matter of time until this story comes home to Pittsburgh — if it hasn’t already and I simply don’t know about it. I’ve written about deaths of trans folks in Philadelphia, Cleveland and Columbus, Ohio, Maryland, and even Sharon, Pa.

In 2014, I wrote 13 blog posts about the murders of transgender individuals.

And as of early October, we’ve lost 21 transgender individuals this year.

That’s more than 80 blog posts (read: transgender people murdered). That doesn’t include the blog posts about trans folks who are violated, but not killed.

The stories I’ve written about violence targeting the transgender community span the country. But the violence is by no means limited to the United States. The Guardian identified the deadliest nations for transgender residents; Iraq, Honduras and Russia are among its list of seven. All transgender (and gender-nonconforming individuals) are at risk for violence, but trans women of color, especially black women, bear a disproportionate brunt of the violence.

My posts include only the deaths and violence I learn about through media and other means. There are certainly many more I don’t know about or no one knows about because of deadnaming and misgendering. My list is not comprehensive.

When I do learn about a murder, I start by checking several transgender blogs and websites to follow their lead in writing my post (including links). I search for the person’s real name, their identity, their pronouns and a photo. I look for details about their life — sometimes their hometown or a job or education, sometimes a quote from a family member or friend. If there’s an investigation around their death, I post details for people to contact law enforcement. I also post details about memorials, vigils and fundraisers. Sue Kerr is founder of the blog Pittsburgh Lesbian Correspondents and the #AMPLIFY LGBTQ storytelling archive. (Photo by Ryan Loew/PublicSource)

I include a list of all trans individuals who are killed within that calendar year, so my readers have context. Because we can’t lose sight of those we’ve already lost while we mourn those more recently lost.

After more feedback from my trans friends, I have started to include a list of trans resources in each post. I urge people who feel outraged or helpless to take the concrete action of investing in trans-led efforts to strengthen our community. That might be a donation or volunteering or getting connected to these groups.

I share the posts on all kinds of social media. I spend hours sharing the stories in spaces that are often not aware of this terrible trend. Those spaces include LGBT groups that do not typically center on the trans community, feminist websites and Democrat-oriented groups like the ones that arose from the Pantsuit Nation phenom.

Recently, a woman in a regional progressive political Facebook group commented on the post I wrote about the murder of 26-year-old Derricka Banner. She wrote, “Where is the outrage?’ and I had no response for her because that’s my question, too.

Laws, policies and religious beliefs that fail to recognize the humanity and personhood of transgender individuals fuel the perception that violence against someone deemed lesser is tacitly tolerated, if not explicitly encouraged.

I know where the outrage is — it is with the legacies of dead white cisgender heterosexual women. It doesn’t take a rocket scientist to see the disparity of reaction between them and women of color, especially black women, especially black trans women. Look at the data around solve rates for homicides in your city. Or simply compare the fundraising for survivors to see what I mean.

Our trans neighbors struggle for fairness in media coverage and law enforcement response to this epidemic. They struggle to bury the deceased with respect and dignity; they struggle for acknowledgement and support from the general LGBTQ community. The number of deaths continues to rise. We can’t say that we don’t know what is going on. We can’t say that there are no trans leaders with solutions and wisdom to guide our response.

There’s only one thing I can say now.

Where is the outrage?

Sue Kerr is founder of the blog Pittsburgh Lesbian Correspondents and the #AMPLIFY LGBTQ storytelling archive. She can be reached at pghlesbian@gmail.com and on Twitter at @pghlesbian24.