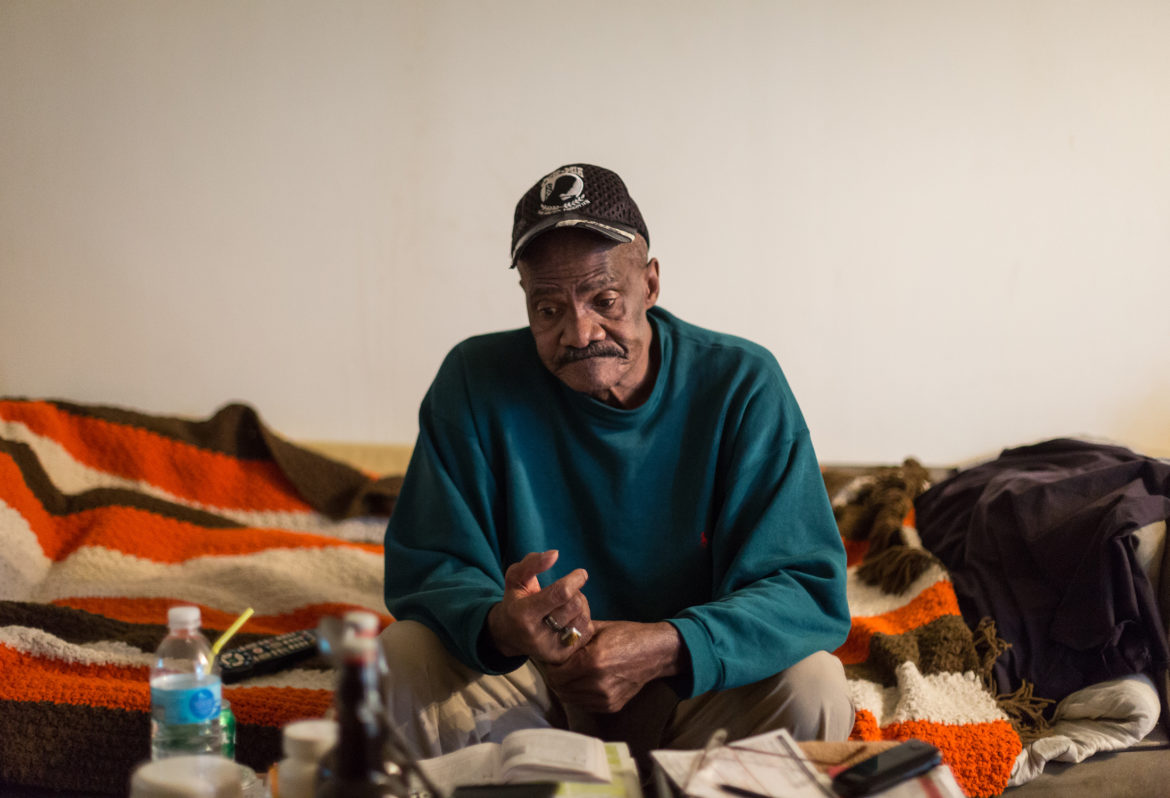 "I'm just tired," said Geary Rivers on having to move from his home at Penn Plaza Apartments. Residents of the apartment complex have been forced to relocate to make way for development by LG Realty Advisors. (Photo by Maranie Rae Staab/PublicSource)

There were packed boxes, stacks of paperwork and a half-packed suitcase. Cans of Raid strewn across the carpeted floor. The Bible sitting open on a small coffee table. That is what Geary Rivers’ apartment looked like last week as he was getting ready to leave his home at Penn Plaza Apartments and move to a new location.Though unhappy that he was being forced to move yet again, Geary was excited that his new apartment in Wilkinsburg, albeit smaller, will be close to the church where he was baptized almost 70 years ago.

He has a lot to say about his life, about his days at Penn Plaza and about his service to his country in Vietnam. But, with a wry smile, he acknowledges that he is reluctant to talk. He says he is not accustomed to people wanting to hear his story.

Born in 1946 at the Magee-Women’s Hospital and raised in the Hill District, Geary has called Pittsburgh home his entire life. He moved to Penn Plaza Apartments nearly five years ago; last year, as demolition began on two of the Penn Plaza buildings, Geary was among a handful of residents moved to the 5600 Penn Avenue apartment — the one building that remains standing.

The year passed quickly and, with the March 31 eviction deadline looming, Geary boxed his life's possessions around him, waiting to be moved to his new home in Wilkinsburg. Last week, he was one of about 20 residents remaining at Penn Plaza. As of Sunday, he is in his new home. 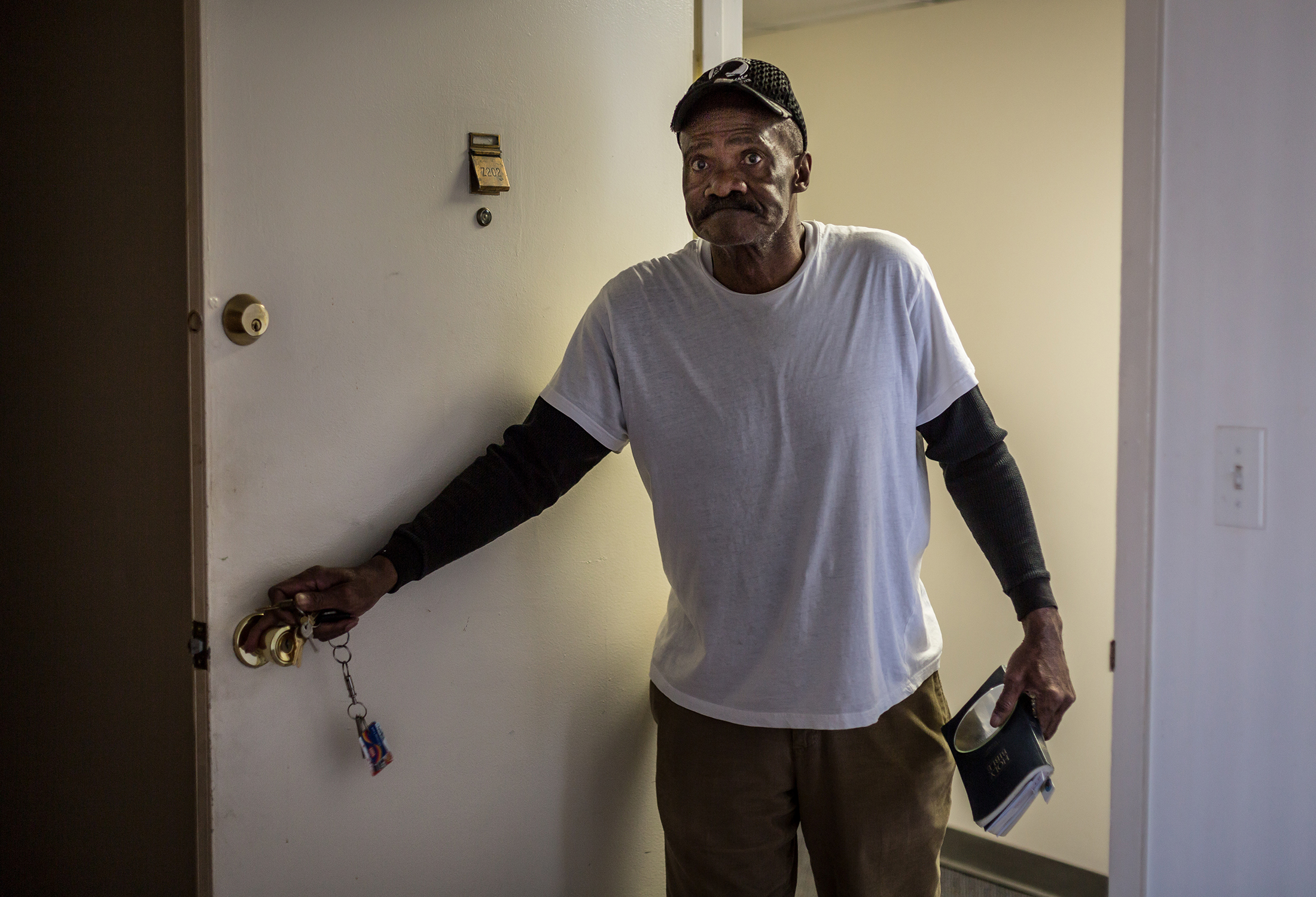 Geary Rivers says goodbye to his home at Penn Plaza Apartments before closing the door one last time on Sunday, Feb. 19, 2017. One of about 20 residents remaining at the soon-to-be demolished Penn Plaza Apartments, Geary is moving to Wilkinsburg. (Photo by Maranie Rae Staab/PublicSource) 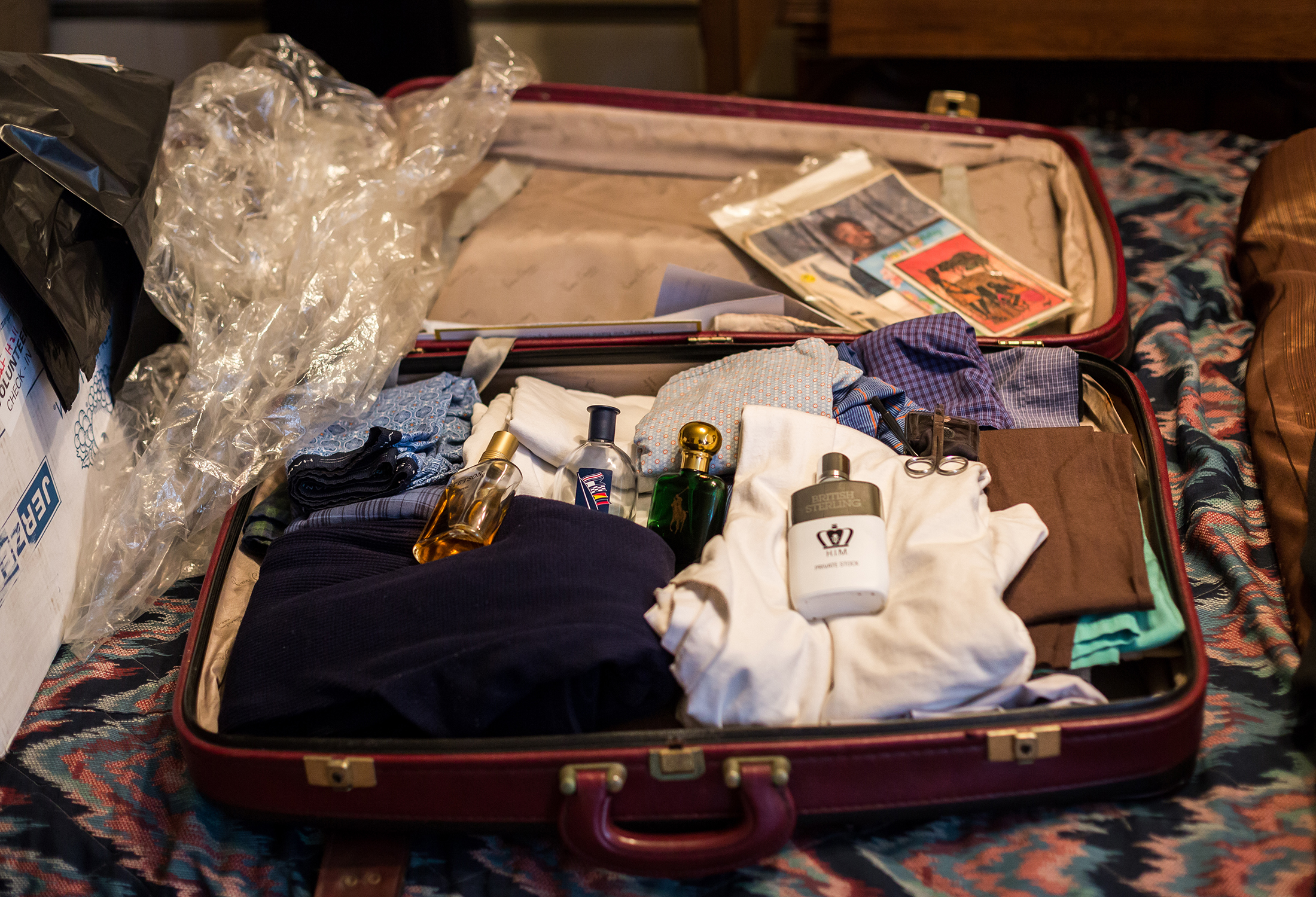 Geary’s belongings were partially packed for several months as he waited to be accepted into new housing. After nearly five years at Penn Plaza, Geary is among those residents being displaced to make way for the development of a Whole Foods, new apartments, offices and parking spaces. (Photo by Maranie Rae Staab/PublicSource) 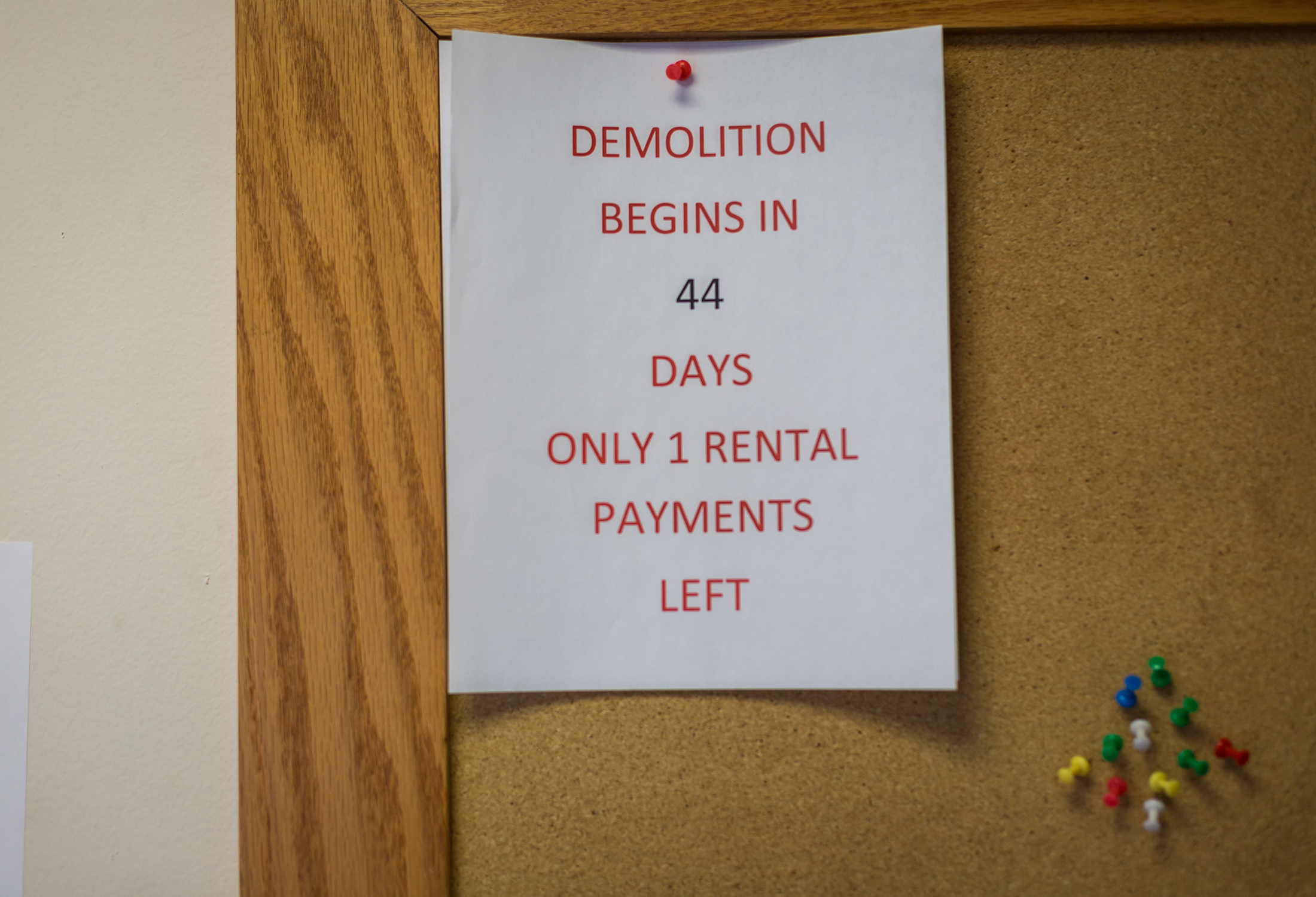 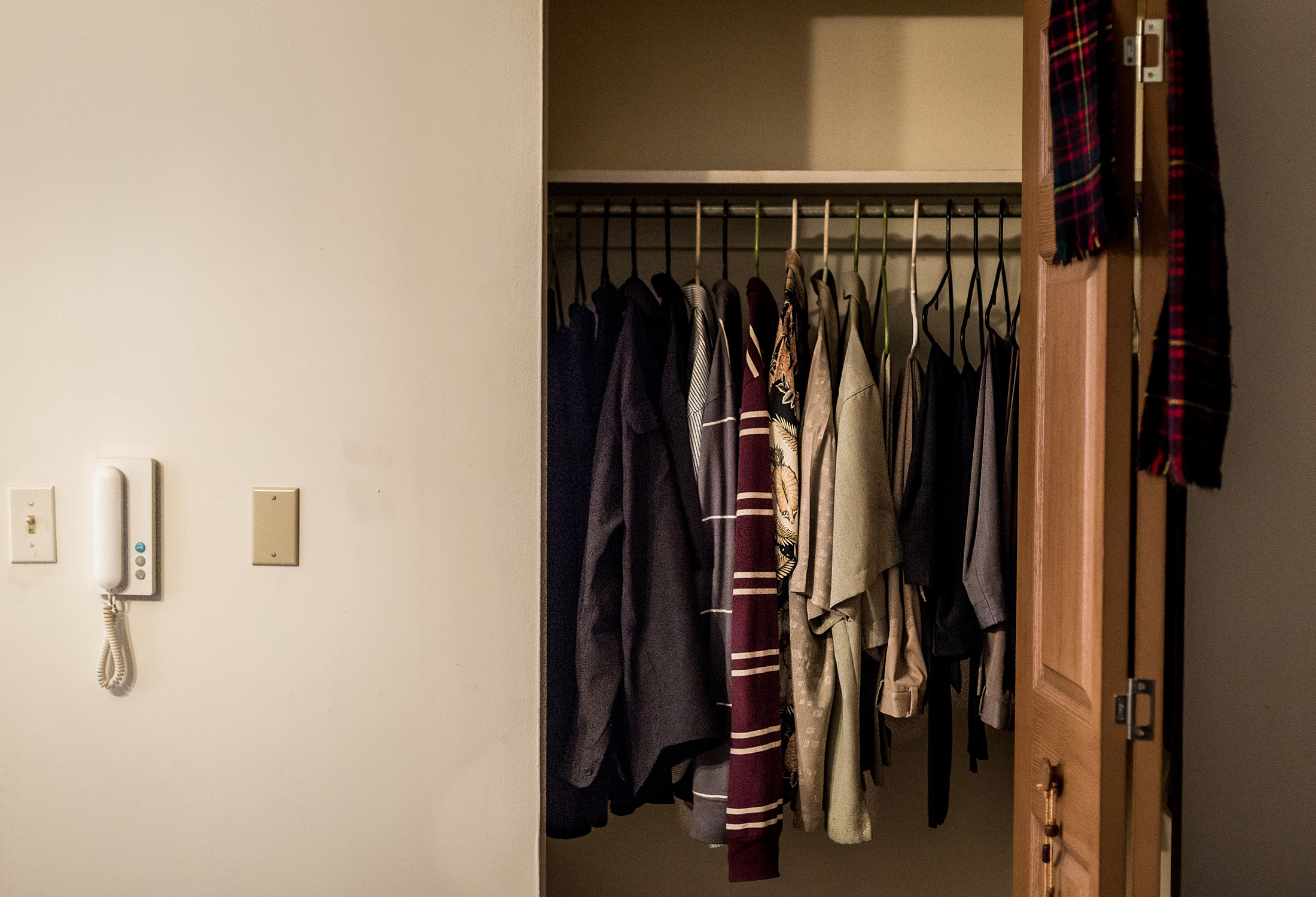 Inside Geary’s closet: “I take care of my stuff. That’s 15 years of wear and tear. I am getting tired of wearing the same thing over and over… I only got two coats. Both of them I don’t like. But I try to hold my head up." (Photo by Maranie Rae Staab/PublicSource) 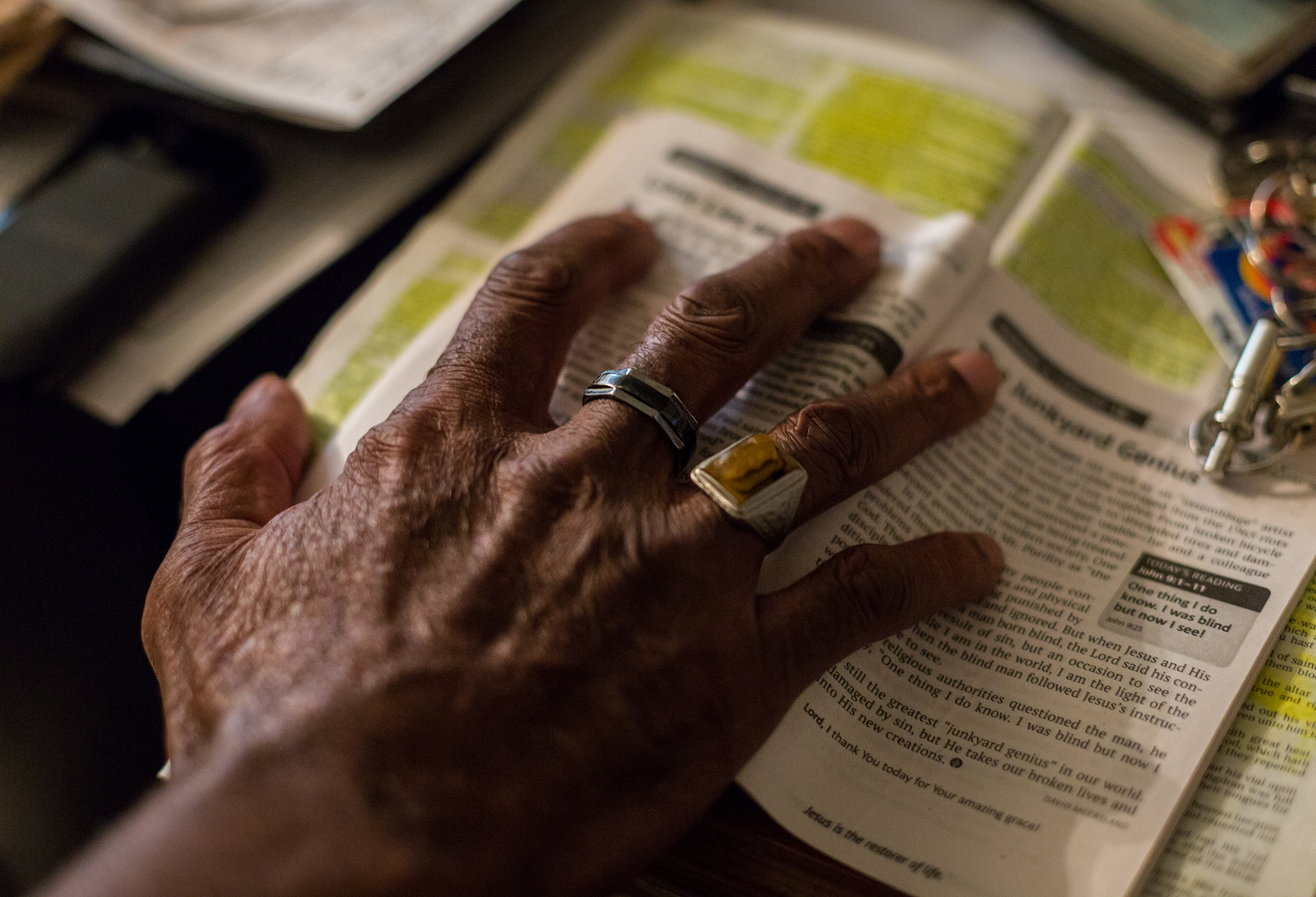 “There’s only one way and that’s through our Lord, Jesus Christ.” Geary credits his strong faith with helping him to get through over 50 years of coping with PTSD. He served in the Army Airborne in Vietnam. (Photo by Maranie Rae Staab/PublicSource) 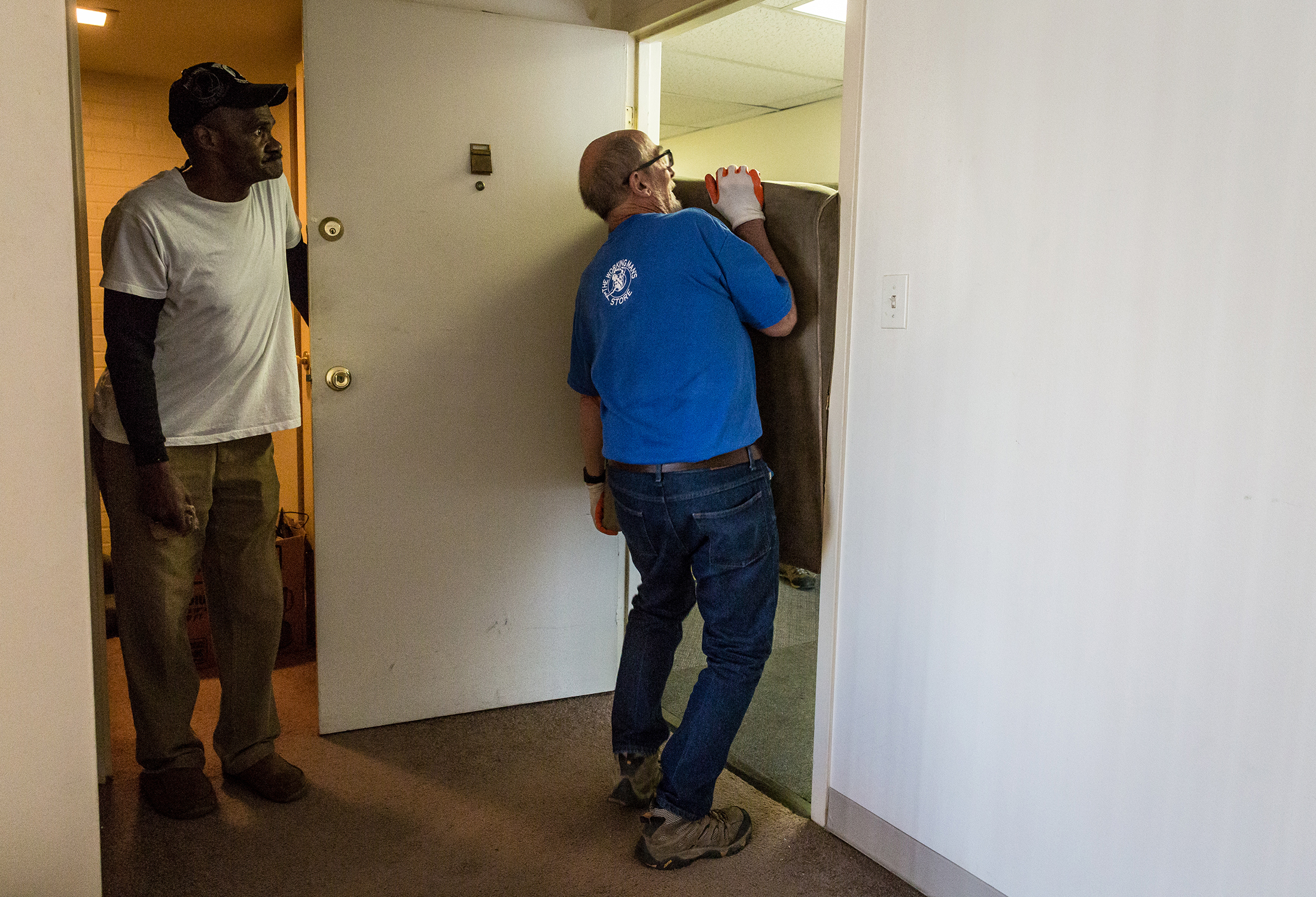 Mel Packer, a volunteer with housing justice group Homes for All, was one of about 10 who showed up on Sunday to help Geary and another resident relocate. (Photo by Maranie Rae Staab/PublicSource) 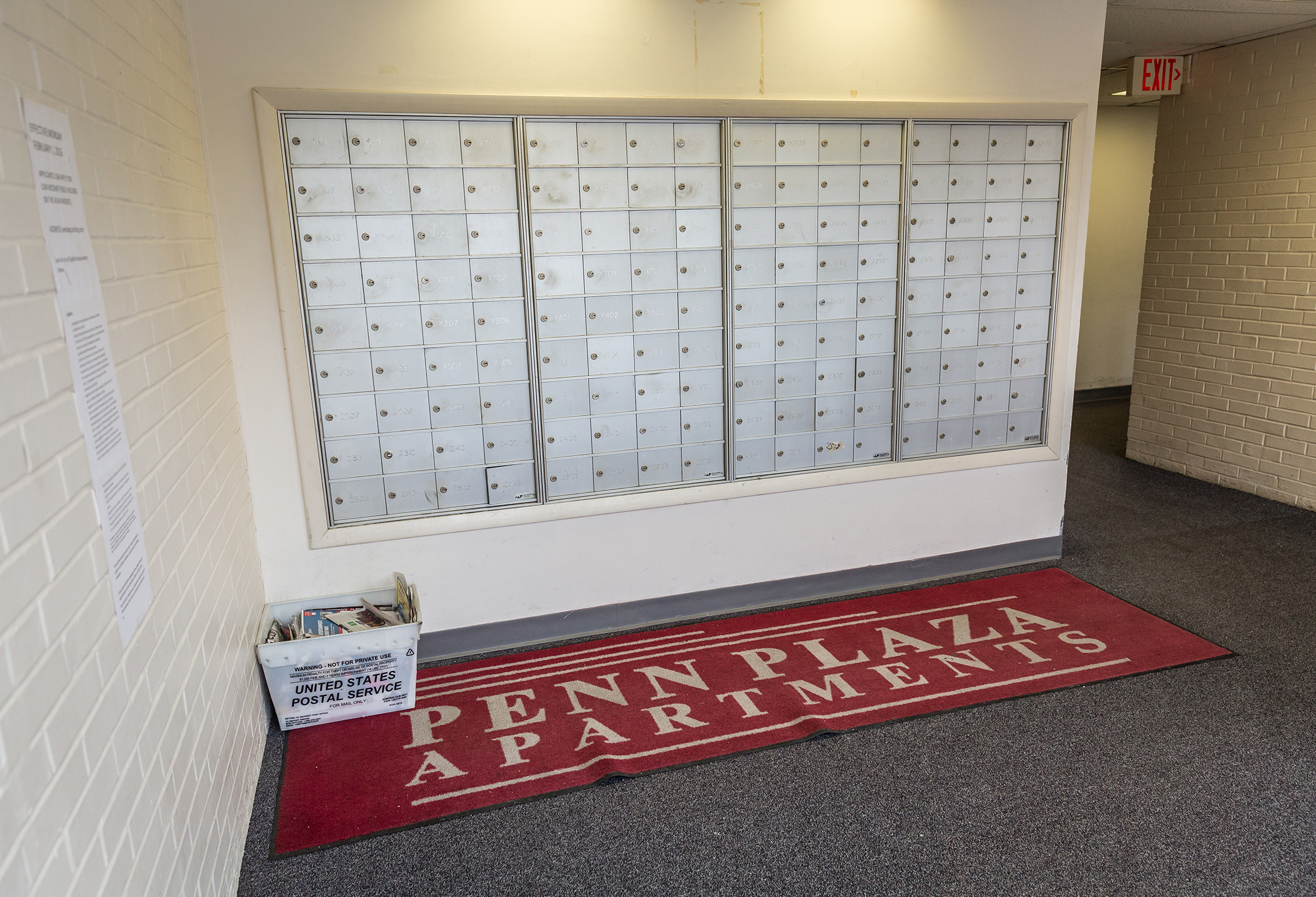 The 5600 building of the Penn Plaza Apartments is the only remaining building of the three that once made up the complex. The remaining residents need to be out by March 31. (Photo by Maranie Rae Staab/PublicSource) 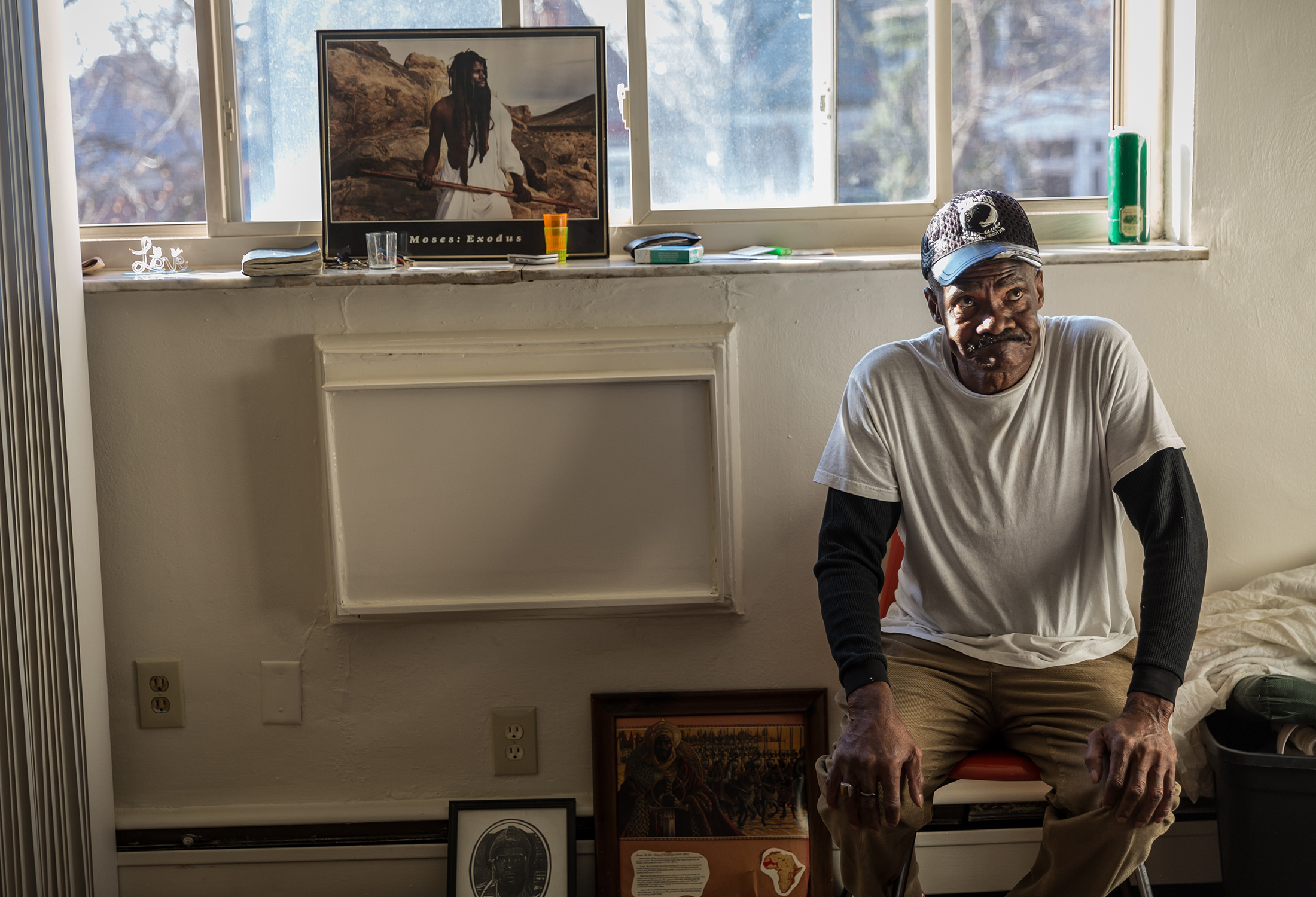 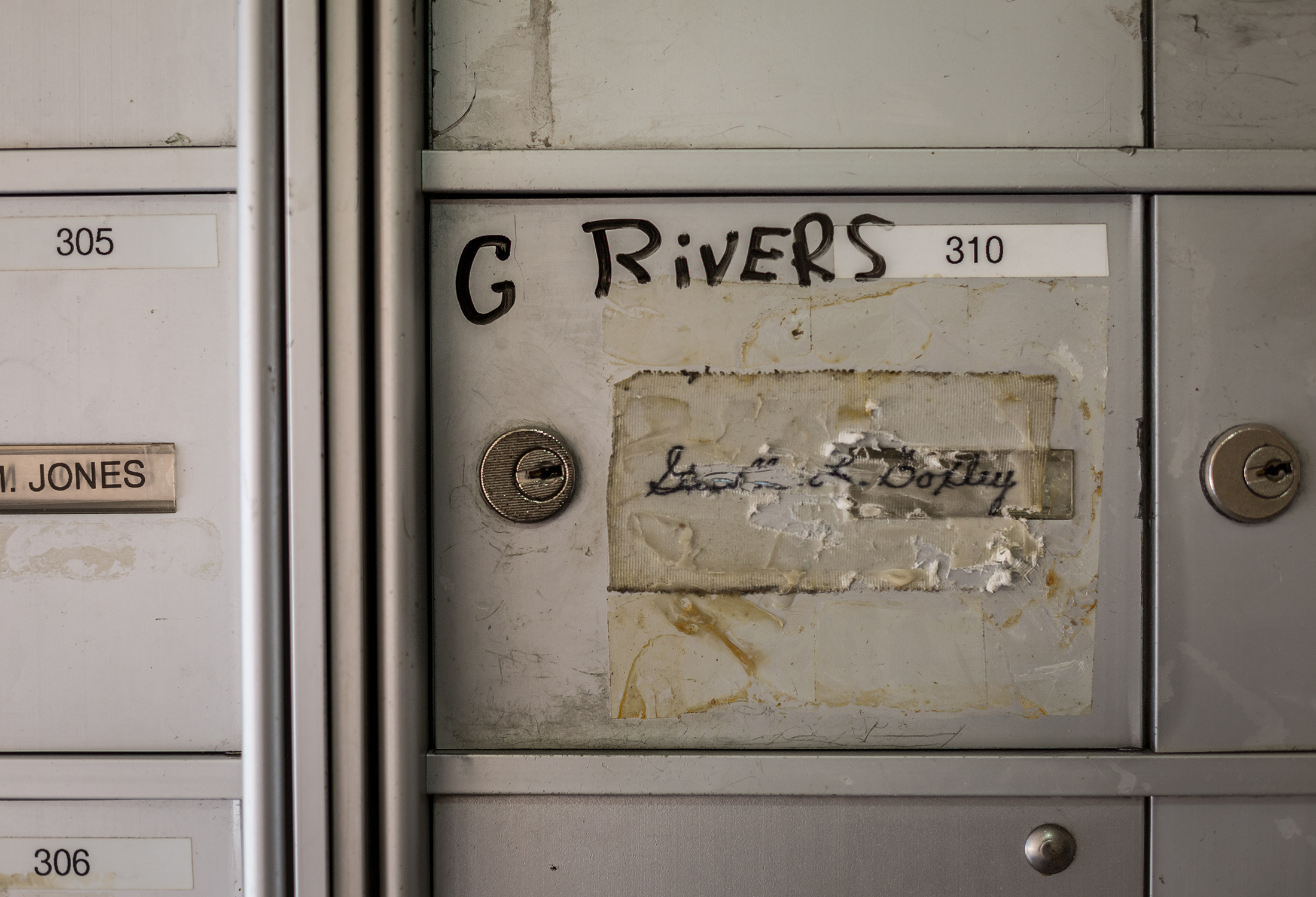 The mailbox of Geary's new home in Wilkinsburg still bears the name of its previous resident. It took less than an hour and one trip for volunteers to move all of Geary's possessions into his new apartment. (Photo by Maranie Rae Staab/PublicSource) 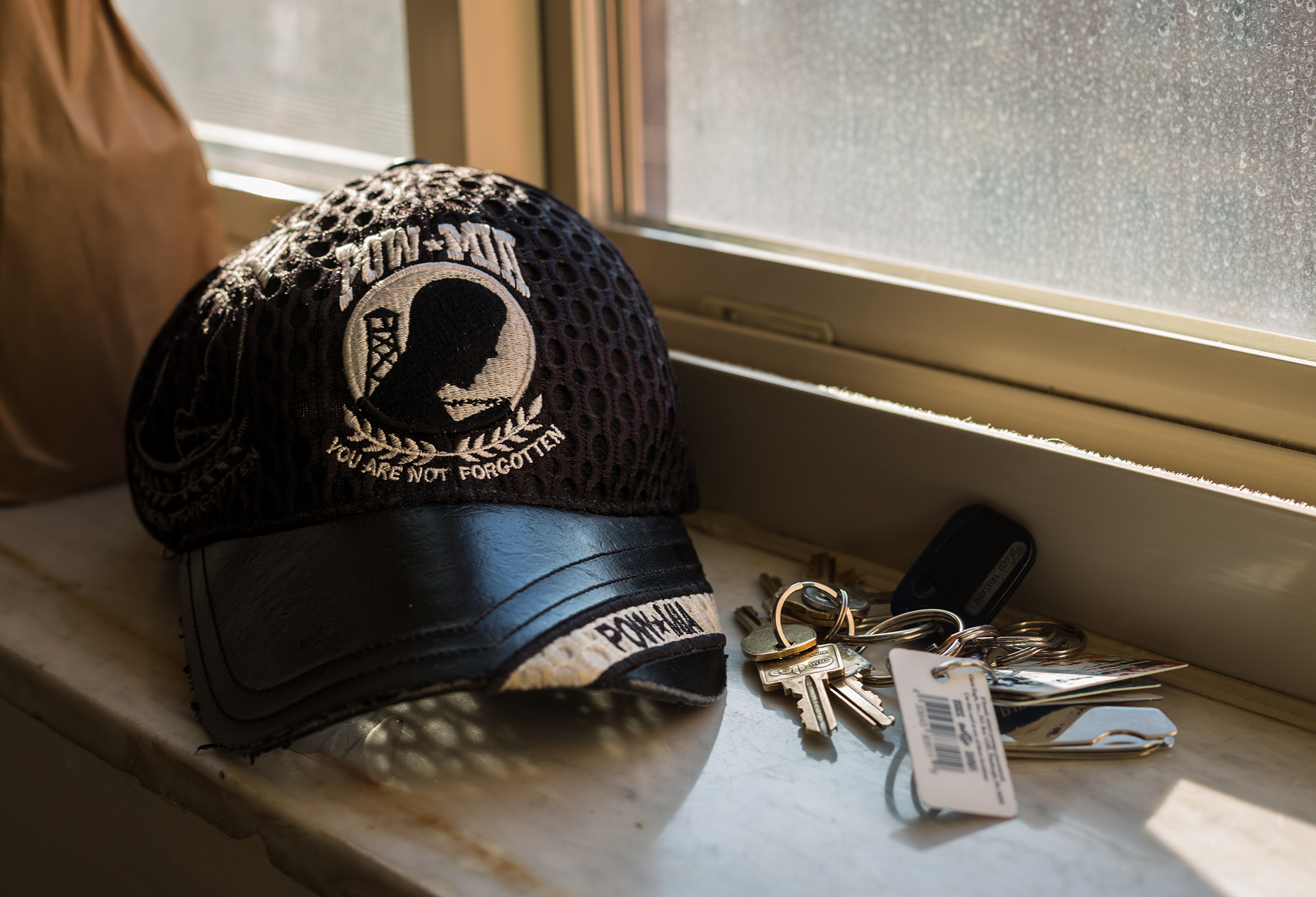 Geary's POW/MIA hat and the keys to his new apartment sit on the window ledge as he and several volunteers begin to unpack boxes of his possessions. (Photo by Maranie Rae Staab/PublicSource) 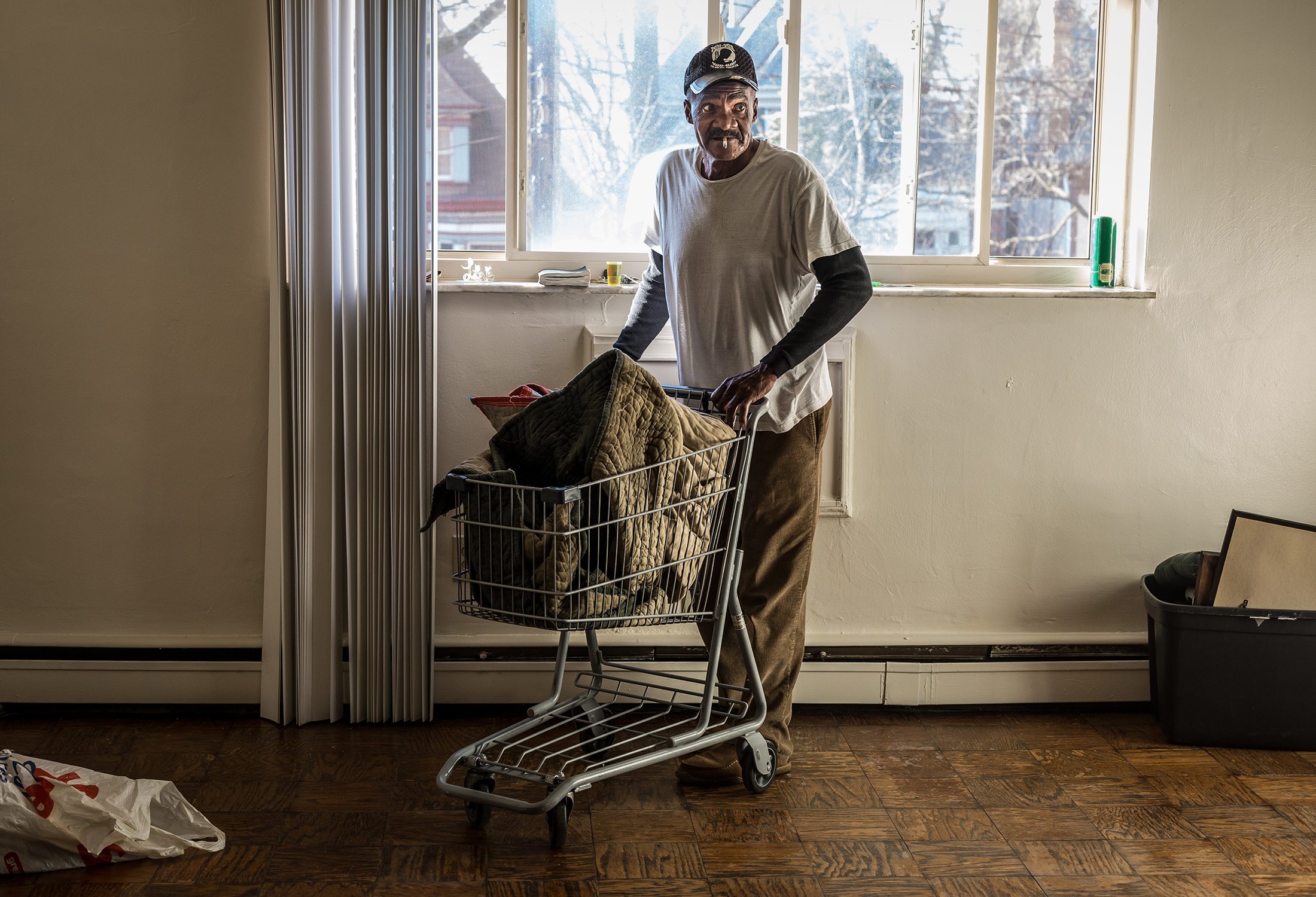 Geary keeps a shopping cart in his apartment to move things around and take on walks. "I’m an H.B. A Human Being. I’m not no race. I’m not black. I’m not blue. I’m not orange. I’m not white. I’m a human being. That’s all," Geary said. (Photo by Maranie Rae Staab/PublicSource) 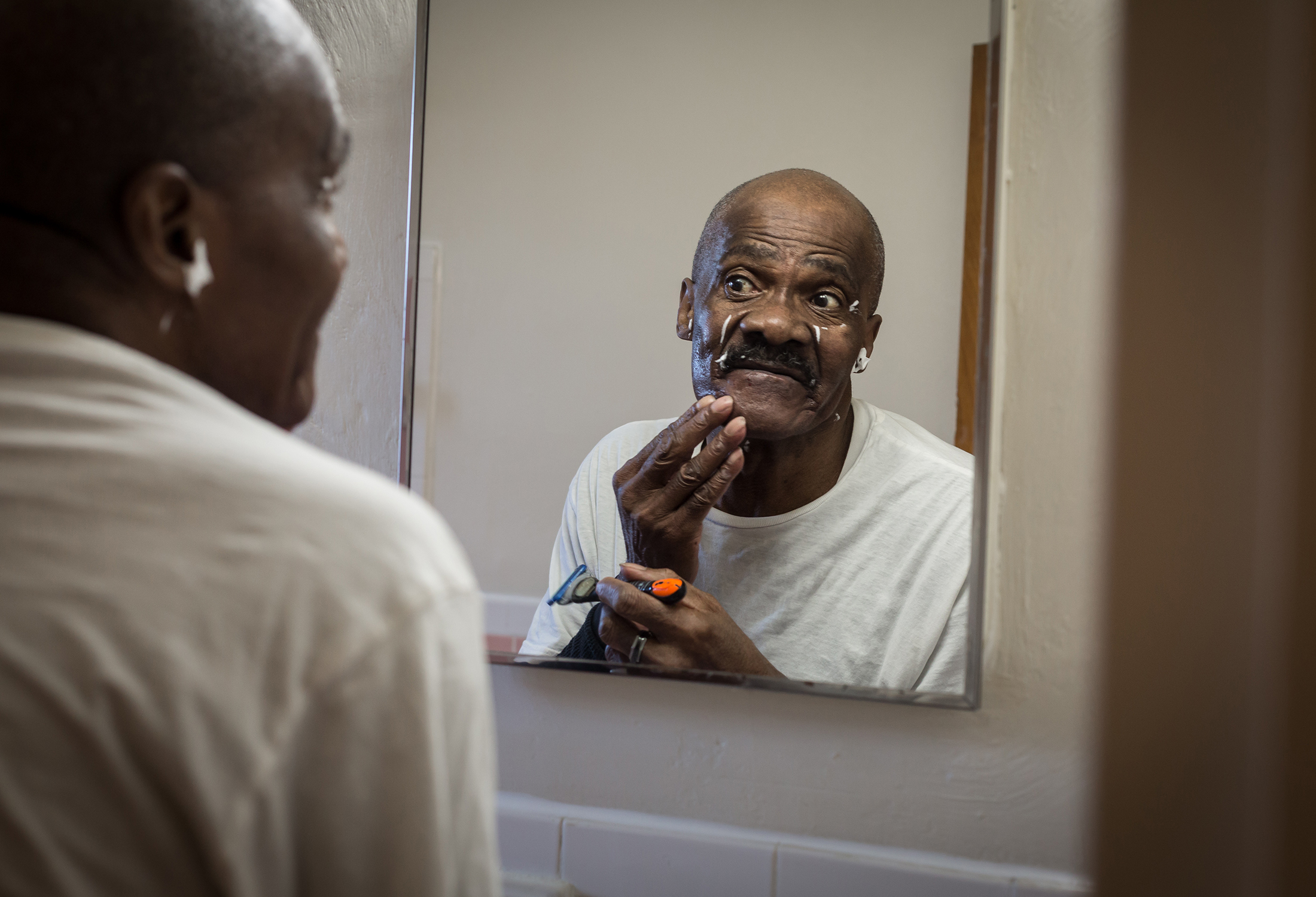 With unpacked boxes still scattered across the floor, the first thing that Geary did upon entering his new apartment was dig out his razor and shave. He explained that he had not had the chance to do so that morning. "I don't like folks seeing me without a clean shave." (Photo by Maranie Rae Staab/PublicSource) 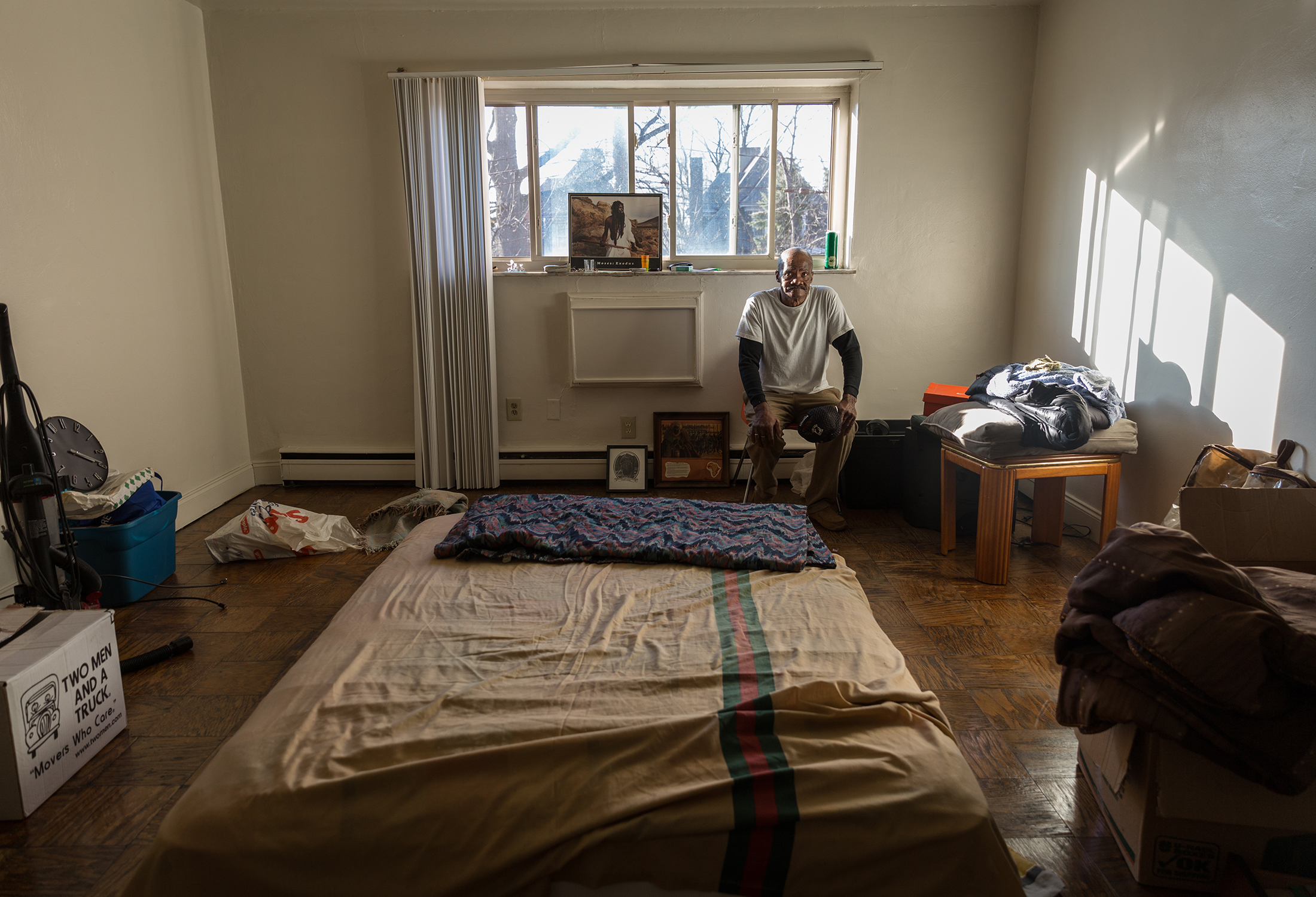 Geary said he doesn’t want pity and doesn’t dream of an extravagant life. He does dream that one day the government will grant him 100 percent disability and that he may “get married maybe, be comfortable and be happy for a few years." (Photo by Maranie Rae Staab/PublicSource)

Geary doesn’t want pity and doesn’t dream of an extravagant life. “I stay by myself. I don’t bother nobody. I just mind my own business.” His days are a reflection of years serving in the Army Airborne during the Vietnam War and of his strong faith.

His routine is simple. “I watch TV, read my Bible, get up in the morning — read my Daily Bread, talk to the Lord, study. I watch Shepherd Chapel and George Meyer. I read books. Study in the Word.”

During an interview at Penn Plaza last week, Geary picked up a can of Raid to explain what his last days in the apartment complex had been like. “I have been buying Raid for the past three months to deal with the bugs.” When the temperatures in the building fall, “I just throw on an extra blanket. Or turn the oven on. But when you turn the oven on, that brings out the bugs…” Geary took me to the sink and had me pour a glass of water to explain why he has been buying bottled water since moving to Penn Plaza. He said it looks oily. I couldn’t see the difference, but I didn’t venture to taste it either.

“These people here,” Geary said referring to the property owner LG Realty Advisors, “they’re pushing us out. They’re rude and they’re disrespectful. Yesterday morning … it’s hard for me to get rest and sleep … round about a quarter to five, I turned over to get some sleep … as soon as I dozed off, they went to bamming and making noise. It scared me so bad.

Perhaps a nod to his military background, Geary shared these details in a matter-of-fact kind of way, surmising that, “Right is right. Wrong is wrong. I don't care who you are. It could be my Momma. If you wrong, you just wrong.

Geary couldn’t have predicted that poverty is where he would end up when at age 18 he decided to join the Army Airborne. “When it came time to serve my country, I didn’t know no better and I gave it my all.” He said he volunteered to fight in Vietnam. “My whole company got wiped out.

“It took the government 30 years to treat me for PTSD, what they called back then shell-shocked.”

Geary still proudly wears his POW/MIA hat and his matching ring. The ring, received anonymously in the mail years ago, is a prized possession. “It came in a little package and had a note that said, ‘We apologize for our country and the way they have mistreated you, Mr. Rivers. We are thankful for your service and we honor you.”

Today, Geary says he is still waiting to receive full disability for his condition. “They said that there is only one piece of paper right now that’s holding up everything.

“I am tired of not having. Seventy years old and I ain’t got nothing. All I have is the Lord.”

“I would love to wake up one morning and go to the mailbox and there'd be a letter there stating, ‘Mr. Rivers, we’re going to give you 100% for the rest of your life.’ The first thing that I would do would be to put money aside for my church, my tithe; the second thing that I would do would be to go to the funeral home of my choice and pay for my cremation. … and I would go buy me some new clothes that I need that I haven’t had in about 15 years.”

Geary was stunned, absolutely speechless, and then moved to tears when a group of volunteers showed up to help him move on Sunday.

He gives credit to the “grace of God” for what he does have and dreams that one day he may be able to “get married maybe, be comfortable and be happy for a few years.

“I am tired of not having. Seventy years old and I ain’t got nothing. All I have is the Lord.”

Maranie Rae Staab is Pittsburgh-based freelance journalist. She can be reached at maranie.staab@gmail.com or 412.979.6187.