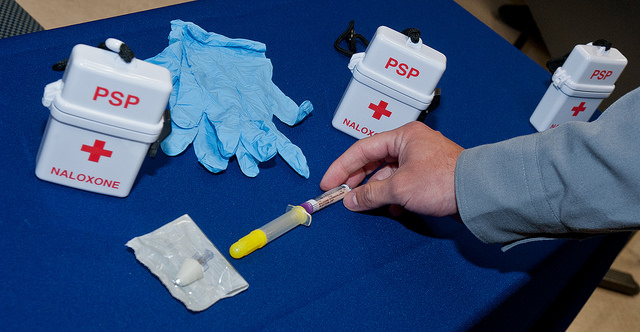 Last week, officials in Cincinnati reported at least 174 overdoses. Normally, the city gets four overdose calls a day, according to officials.

Some victims seemed dead. One story describes a police officer pushing his knuckle into the sternum of a man who had turned blue on the dining room floor of a house with several overdoses. He miraculously sat up, then seemed to pass out and was revived by the overdose antidote naloxone.

Other victims were found in the neighboring yards and at a nearby housing complex.

Twenty-six victims survived in Huntington. But that’s just one isolated period, and, over time, many others have died.

In Cincinnati, the death toll also remained low, even as the region’s top public health official described the spike as ‘unprecedented.’ Again, naloxone is credited.

The antidote can be injected or sprayed in a drug user’s nostril. If applied in time, a drug user will live. That means they’ll have a chance to get treatment, or else survive to use another day.

Naloxone, however, won’t work if first responders aren’t carrying it. It can also take several doses.

In Pennsylvania, the antidote is available from a pharmacy to anyone who wants it, including drug users. If heroin is used socially, an overdose can be stopped before police or paramedics arrive.

Beyond heroin, drug users are being killed by the painkiller fentanyl, as well as by carfentanil, a painkiller used in elephants. More traditional painkillers like OxyContin are also commonly linked to overdoses.

Through July, 148 people have died from drug overdoses this year in Allegheny County. That statistic only includes closed cases, however, and could continue to climb. Heroin and fentanyl are the most commonly found drugs.

In 2015, overdoses spiked to an all-time high of 424 deaths in the county. That’s up nearly 40 percent from the previous year.

Since 2008, 2,212 people have died from overdose locally. However, those statistics remain incomplete.

Police in many areas, including Pittsburgh, have only recently started carrying naloxone. Until final overdose stats are available, it’s difficult to tell how much that effort can keep overdoses from increasing. It’s clear, however, that lives have been saved.

Local paramedics used naloxone at least 1,466 times from the beginning of 2014 through mid-September last year, according to a recent report from Allegheny County.

While officials are realizing the importance of stopping overdoses, treatment experts still say they struggle for funding and support for interventions that can keep users alive.

Last year, for instance, the state awarded $2.5 million in grants to fight the opioid crisis. Then that money was lopped from the budget, and many of the bills were left unpaid.

The current state budget, however, did include $15 million for specialized centers to treat opioid addiction. Additional centers are being paid for by Medicaid savings and federal funds.

In 2015, Pennsylvania overdoses spiked nearly 25 percent to 3,383 deaths, according to the Drug Enforcement Administration. Officials fear those numbers will worsen.