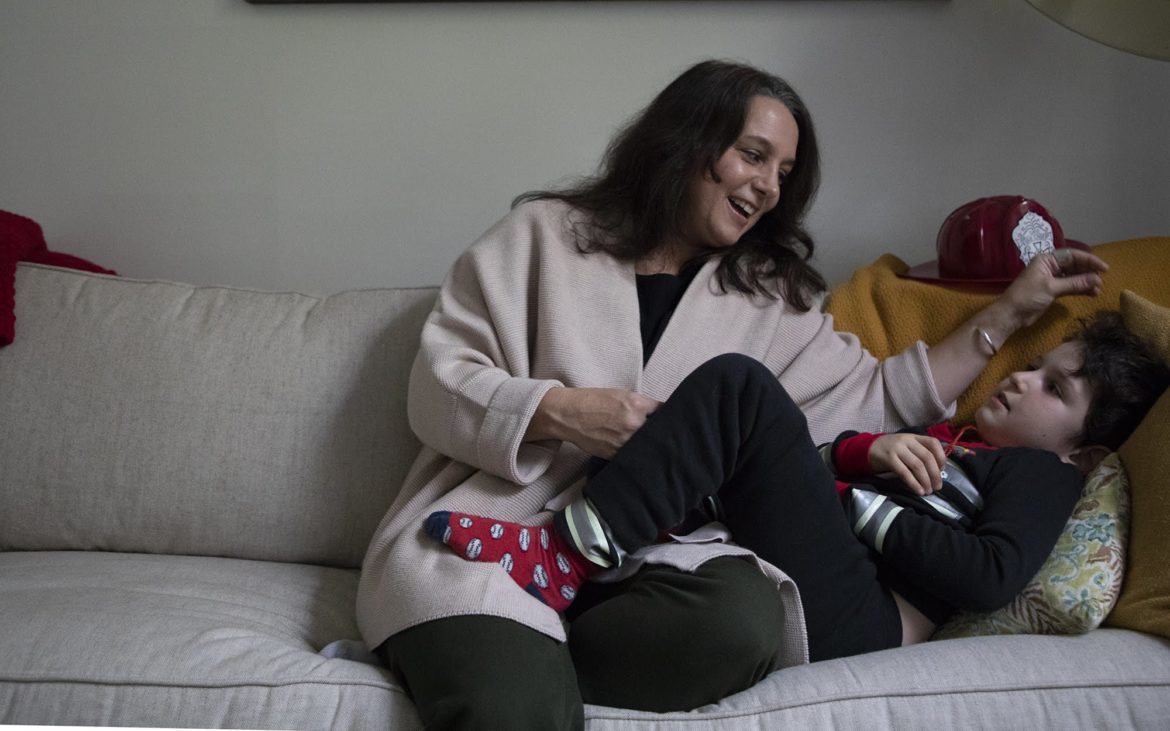 Christine Graziano pets her 5-year-old son's head before they go out trick-or-treating near their home in Shadyside on Oct. 31, 2018. (Photo by Kat Procyk/PublicSource)

My 5-year-old son was angry and shouting and clingy all last week. Every night from Monday onward, he called me to come into his bed to sleep or asked to come into ours.

It’s not his typical behavior. But nothing was typical about last week in Pittsburgh.

While I learned about the synagogue shooting as it was happening through phone alerts and the eyes of other worried parents, my son made it through the weekend unscathed. I even thought he made it through school on Monday without learning of the horrific events that took place in Squirrel Hill. My son's teacher said nothing came up in school.

But that evening, as I sat down at my desk to work as I often do after my son goes to sleep, I heard him call out to me. I went down the stairs to his room. "What is it, honey?" I asked.

I said OK and pulled his rocketship-speckled comforter over us. Before I knew it, he threw his entire body on top of mine — what felt like an attempt to make sure I didn't leave. It had a feeling of desperation to it.

"Mom, I am having a nightmare in my mind."

"But, you haven't fallen asleep yet," I said.

"I know, Mom, but it is a thought that won't leave my head. I am afraid some bad guys are going to shoot me."

I look at my boy every day and think he is beautiful. I may be biased as his mother, but what isn't beautiful about a life that still mostly navigates the world in lightness and in the joy of play?

When the news of the shooting broke, I was at an event I had organized, a Family Day celebration designed to mark the start of children’s lives born to our community through tree giving, planting and celebration. 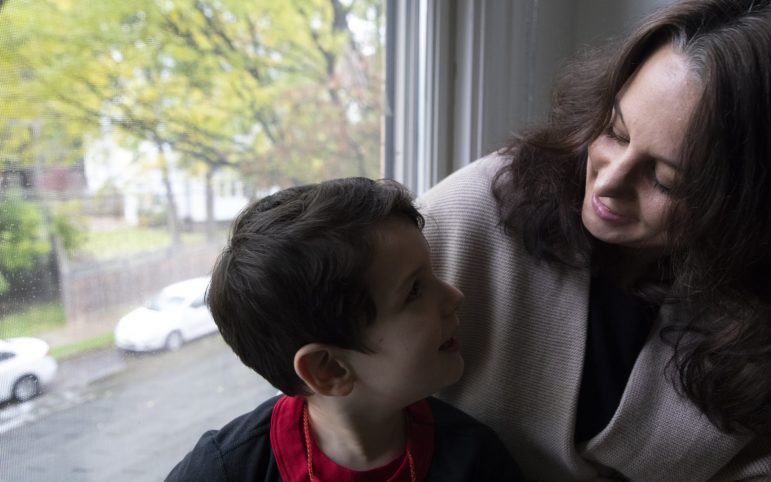 Christine Graziano with her son at their home in Shadyside. (Photo by Kat Procyk/PublicSource)

Shortly after it began, a friend who was volunteering approached and showed me the screen of her Apple watch. It read 'Active Shooter on Shady and Wilkins' — no punctuation. We looked at each other, eyes wide. I gulped down my fear and immediately put on a poker face so that my son and the other child near me wouldn't see my insides.

At the same time, a familiar numbness came over me. The numbness of knowing the inevitability of this moment. In some ways, I had been preparing for it all year while we lived abroad in Spain. As we approached our return to the United States, I knew that my son's days of innocence were in jeopardy. Kindergarten in America meant the start of active shooter drills.

He hadn't yet had that drill in his school, but the time when he could be afraid of ‘bad guys’ had arrived sooner rather than later.

I froze as he clung to me in his bed. Knowing now that my son had heard the news during school, I tried to stay calm and pushed out a best version of a strong and steady voice. "Why are you worried about that?" I asked him.

He explained that during an after-school activity, a first-grader told him that his neighbor's friend had been shot and killed by a bad guy with a gun.

My mind raced. I quickly grabbed on to a conversation that I had had hours earlier with the head of school in the hallway on my way to pick up my son. No doubt she had shared this advice with many other parents that Monday after the shooting.

I had asked her what I should say to my son if he did ask questions about the shooting, and she was very clear: "Listen. Correct facts. Keep it simple."

But keeping it simple wasn't easy because his questions had no end. "What was the whole story?” he asked. “Did she really die, Mom?” he asked several times. “Why would a person want to kill her? Where exactly was the bad guy when he did this? Was it nearby? How far up the road?”

"Far,” I answered quietly and calmly from our home in Shadyside. “It would take a long, long time to walk there."

"I know, Mom, but it is a thought that won't leave my head. I am afraid some bad guys are going to shoot me."

"OK," he said, nervously. "Nowhere near here. OK," he repeated, convincing himself danger wasn't near our home.

Then he asked me to tell him a story as he always does at the close of the night. "What would you like to hear tonight?" I asked him.

"I don't want the news of Friday or Thursday. Tell me the story of the Saturday news. All the story," he emphasized as if he were aware there was still much more he didn't know.

He clutched my arm with fierce strength as he fell asleep and announced that if he held me tight, I wouldn't be able to leave him alone in the night.

When he finally drifted off and I wiggled out from under his grip, I kissed him on his head and left the room. My chest was tight.

I spent the next hour pacing around the adjacent room, recounting the conversation to my husband. I even pondered if we could move our family permanently out of the United States.

We are careful with my son's exposure to violence at this tender developmental age. We intentionally choose not to have a TV in the house and limit iPad time mostly to books and educational games. He is still enjoying relatively innocuous shows like “Daniel Tiger’s Neighborhood,” “Thomas and Friends”, “PAW Patrol” and “Elmo’s World.”

My son only knew about bad guys as knights and imaginary monsters that existed in what he calls "the evil times" and has always assuredly announced they were "back then."

While I don't know exactly how much he understands, he seemed shaken by his first peek at a world he never knew existed before now. Our reality.

Oct. 27 was horrific for so many reasons. Not only for the loss of life and for the violence that caused it, but for the absolute loneliness and lack of connection to love, to living things, to humanity that the man who committed the shooting must have felt. The shooting was a tragedy because it targeted the Jewish community and ended lives. It is also tragic for what it has taken from the living and how it has changed the course of the future.

I will mourn that day for all those reasons.

I will mourn over the inability of our lawmakers to lessen the risk to us all and to foster an environment of civility and respect.

And I will mourn for what is being taken from our children.

Christine Graziano is the founder and director of Plant Five for Life. She can be reached at Director@plantfiveforlife.org.