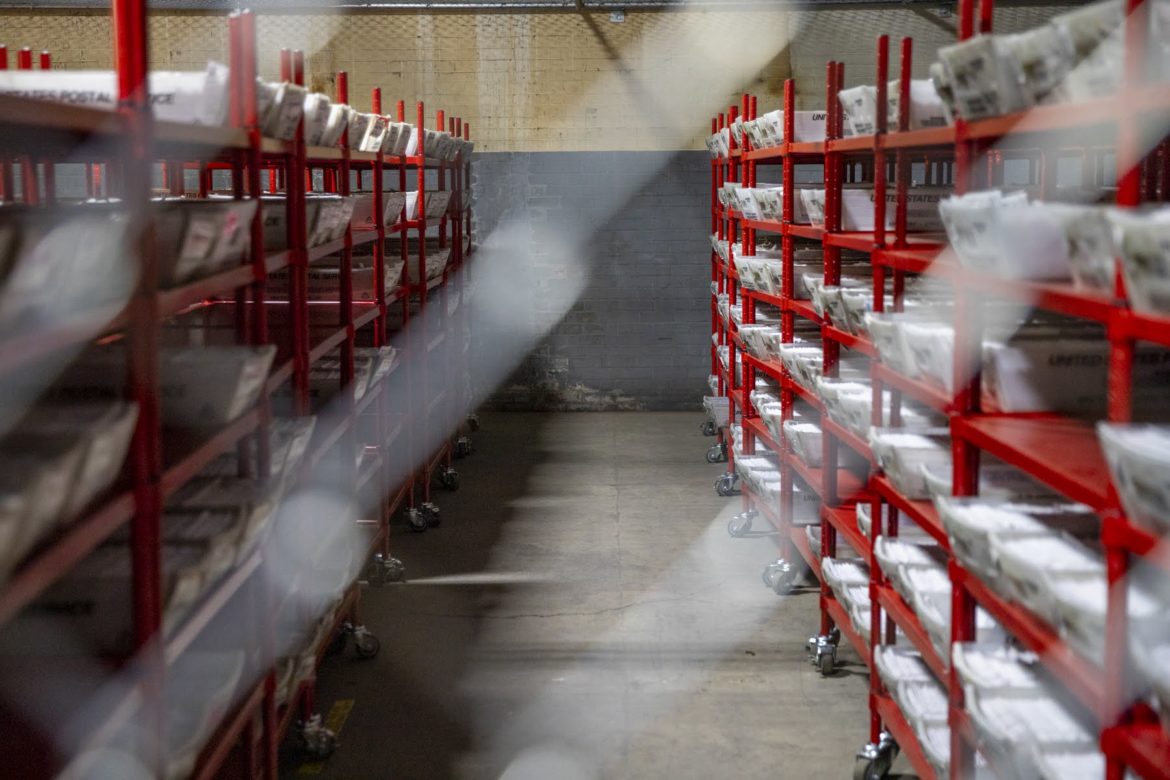 Universal, no-excuse mail-in voting has survived a court challenge in Pennsylvania and will live on after an eventful first year on the books. But a look back to its creation through its critical role in the 2020 election offers a window into how policy and politics can shift on a dime.

“Everybody thought this was a good idea — a great idea, in fact — until Trump spoke out against it,” said Joe Mistick, a law professor at Duquesne and local political commentator.

Act 77, the Pennsylvania law that legalized no-excuse mail-in voting, came together in 2019 as a compromise between the Democratic and Republican parties. Republicans achieved their goal of abolishing straight-ticket voting, which Democrats agreed to in order to obtain the vote-by-mail expansion.

Mistick said the law made Pennsylvania “a symbol, an example of bipartisanship, of how the two parties can come together for the good of the franchise and set aside their political differences.”

A lot has changed since then.

Republicans at the highest levels of government, led by Donald Trump, are denouncing a policy Pennsylvania Republicans overwhelmingly approved just over a year ago.

How did Act 77 come together in the first place? What do the lawmakers who approved it think now? A wider view shows that mail-in voting, before Trump began attacking it, was an uncontroversial and bipartisan idea. And despite recent opposition, it appears to be here to stay in Pennsylvania.

Though mail-in voting was seen as a crucial tool to keep voters safe during the pandemic, Sen. Wayne Fontana, D-Allegheny, noted that it came about before COVID-19 existed. “We were moving in that direction anyway,” said Fontana, the Democratic caucus chair in the Senate.

Gov. Tom Wolf signed the bill into law on Oct. 31, 2019. At the time, Republicans didn’t see mail-in voting as an electoral liability. In fact, shortly after Act 77 passed, Republican Senate Majority Leader Jake Corman pointed out to CNN that the introduction of no-excuse mail-in voting merely removed the formality of listing an excuse. “We never checked anyway,” he said. Absentee balloting was already legal for voters with a narrow set of excuses such as health problems, travel or attending school out of state.

“Pennsylvania Republicans know that was a good deal because they picked up seats in the legislature.”

Corman and former Rep. Mike Turzai, who was the House speaker when Act 77 passed, declined to be interviewed for this article. Republican House Majority Leader Kerry Benninghoff and the current speaker, Republican Rep. Bryan Cutler, did not respond to requests for comment.

“If Republicans had thought that for one second, they wouldn’t have done it. They’re the majority party,” he said.

For their side of the bargain, Republicans required a long sought-after prize: eliminating straight-ticket voting. Until 2019, voters could walk into a voting booth and press one lever or button to cast a vote for each of a given party’s candidates up and down the ballot.

This inherently favored down-ballot Democrats because there have long been significantly more registered Democrats in the state than registered Republicans. Republicans expected that eliminating straight-ticket voting would mean more people would split their ticket — that is, to vote for one party in the presidential race and another party in state and local races — or that Democratic voters would vote at the top of the ballot and leave lower races blank.

Fontana said straight-ticket voting didn’t always seem destined to be involved in the deal, but in hindsight, he said it’s clear the Republicans were set on it.

“We thought it was going to be out of the bill,” he said. “As it turns out, it was a big deal all along for the Republicans … They weren’t backing off straight-party voting.”

“It was something that we tried out, but it’s brought so much chaos into this process.”

Senate Minority Leader Jay Costa, D-Allegheny, negotiated the deal along with Republicans and the Democratic governor. Looking back, he said he thought the final proposal was a “fair and balanced reform to our election law.” Costa was one of the eight Democratic “yes” votes in the Senate.

Fontana said he supports no-excuse mail-in voting but reluctantly voted “no” because he feared that the loss of straight-ticket voting would cost Democrats at the polls without sufficient time to educate voters about the change.

Though many analysts are attributing Joe Biden’s victory in part to mail-in voting and Democrats’ embrace of it, Mistick said Act 77 can still be seen as a success for Republicans. The GOP held onto both houses of the legislature and wrested control of two statewide offices, treasurer and auditor general.

“Pennsylvania Republicans know that was a good deal because they picked up seats in the legislature,” Mistick said. “They picked up two out of three statewide row offices. This turned out okay for them. It was a compromise that worked out well for both sides.”

He suggested that mail-in voting wouldn’t have hurt Republicans in 2020 if Trump had not denigrated it, and Trump himself would have come closer “and maybe won” if he had embraced it.

The loudest post-election complaints from local Republicans have been about procedural changes made by Wolf and state courts, not about Act 77 itself.

Three Republicans who represent parts of Allegheny County — Bob Brooks, Mike Puskaric and Valerie Gaydos — objected strongly to late adjustments to the process. State courts, after requests by the Wolf Administration, ruled that ballots could be counted if they arrived up to three days after Election Day as long as they were postmarked by Nov. 3. Courts also ruled that counties could use satellite election offices and ballot drop boxes. All three Republicans said that changes to election law can only come from the legislature.

“Unfortunately, once the legislation was passed, we then saw people like the secretary of state, Pennsylvania Supreme Court, we had all these people that started manipulating the actual rules and the way that it was implemented,” Puskaric said, “and really took it from what was a limited mail-in ballot program to something much greater than that, which is more of early voting, late voting, et cetera.” 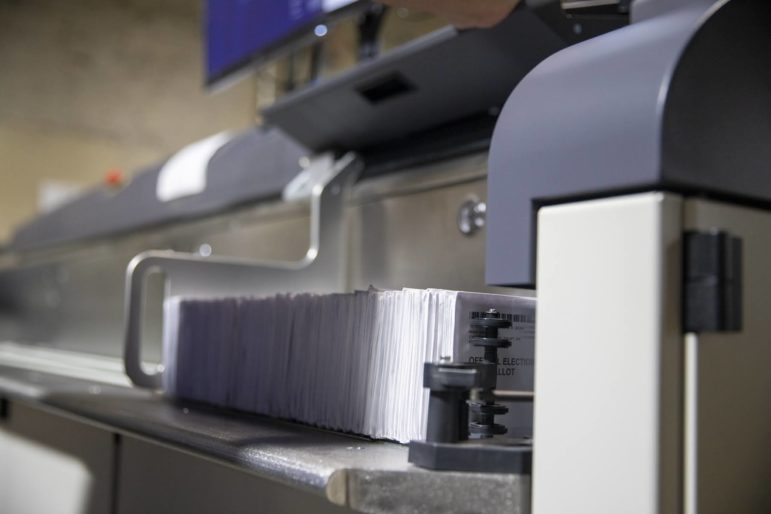 Sam DeMarco, the lone Republican on the Allegheny County Board of Elections and the only member to vote against certifying the county’s election results, said the governor and the courts’ decisions on the extension, ballot drop boxes and satellite voting offices “diluted the safeguards and security” of the election.

“The PA Supreme Court recognizes the legislature that has the authority and responsibility for writing election law, but they used the excuse of COVID-19 to grant these,” DeMarco said.

Jessie Allen, a professor of law at the University of Pittsburgh, said Republicans are mistaken in saying that only the legislature would have had the power to make these changes. She said the court was simply interpreting the law as it is written, which is well within its job description.

“The court was saying under the extreme emergency circumstances of the pandemic, when they had a statement from the Postal Service that the post office couldn’t guarantee that they could actually return ballots received by people who had applied for mail-in ballots by Election Day, the court said then to enforce that deadline would be to wrongly disenfranchise Pennsylvania voters under the Pennsylvania state constitution,” Allen said.

Gaydos and Puskaric, both of whom voted for Act 77 in 2019, told PublicSource in late November that they now favor abolishing no-excuse mail-in balloting.

“It was something that we tried out, but it’s brought so much chaos into this process,” Puskaric said, citing several unsubstantiated claims of voter fraud.

Why did he vote for Act 77 in the first place? “We were basically told, vote it up or down, it’s been pre-negotiated, it is what it is,” Puskaric said. “That being said, we did have some reassurances that it was going to be limited in scope and that there were going to be some security checks.”

She said having mail-in voting and more steps in the process makes the system more prone to errors. She also said she has voted by absentee ballot in the past while traveling for business.

Brooks baselessly accused Wolf and Democrats of using the system to cheat in the 2020 election. But unlike Gaydos and Puskaric, he does not object to mail-in voting on principle and said he would prefer to bolster the law rather than scrap it.

A group of Pennsylvania Republicans, led by defeated U.S. House candidate Sean Parnell and U.S. Rep. Mike Kelly, sued to invalidate no-excuse mail-in ballots cast by Pennsylvanians on the grounds that Act 77 violates the state constitution. The Pennsylvania Supreme Court ruled against them noting that the suit was filed more than a year — and two elections — after the law was enacted. The U.S. Supreme Court declined to take up the case on Tuesday.

When asked about Act 77’s future, Senate Minority Leader Costa pointed to the political reality in Harrisburg: Wolf would veto any repeal. But he was also skeptical that a large number of Republicans would support a repeal.

“I’m not so sure why they would [repeal], given they had success down the ballot,” Costa said. “It’s the success at the top of the ballot that they weren’t able to achieve. I don’t know whether or not they would, in hindsight, go back and say it was a mistake or vote to repeal Act 77.”

There may be room for bipartisan legislation to expand or clarify Act 77, though. Members of both parties, often for different reasons, have said the law needs work.

Rep. Sara Innamorato, D-Allegheny, said she voted “no” in 2019 because she felt the process was too rushed and more details needed to be hammered out.

“It was the most drastic changes we have made to our election code … so to me, responsible governing and policymaking would be to sit with that, debate it, tighten up language,” Innamorato said. “Because when you pass the bill, and there’s things that can be interpreted differently, that’s where we got a lot of these court cases … You open it up for that kind of action.”

She said she strongly favors no-excuse mail-in voting and that adding clarity to the law will “build trust in that mechanism.”

Fontana, the Democratic caucus chair in the Senate, said he plans to introduce legislation in January that would expand Pennsylvania’s vote-by-mail program to replicate systems seen in states such as Oregon and Colorado, which mail a ballot to every registered voter automatically. Costa didn’t commit to supporting the move but said that it “will certainly be something that we look at” as lawmakers plot the path forward for election law.