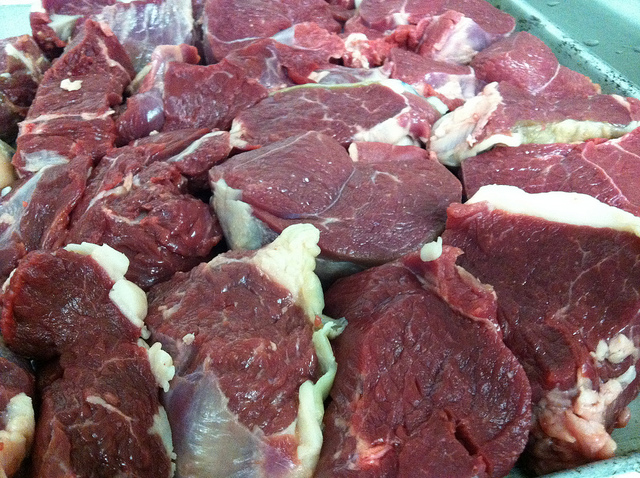 People are becoming more conscientious about the food they eat, but most shoppers are simply looking for meats that are free from antibiotics and hormones and raised in humane conditions.

The majority of people aren’t thinking of the amount of water that was used to produce their steaks.

But it appears that everyone should be, especially with the projected growth of two billion people by 2050, according to research and projections by Nestle, the largest food company in the world.

According to a report by Reveal at The Center for Investigative Reporting:

Producing a pound of meat requires a tremendous amount of water because farmers use tons of crops such as corn and soy to feed each animal, which require tens of thousands of gallons of water to grow. It is far more efficient when people eat the corn or soy directly.

If other countries had been eating as much meat as Americans all along, the world’s freshwater supply would’ve been depleted 15 years ago, according to Nestle.

In private, Nestle executives told U.S. officials that the world is on a collision course with doom because Americans eat too much meat, and now, other countries are following suit, according to a secret U.S. report titled “Tour D’Horizon with Nestle: Forget the Global Financial Crisis, the World Is Running Out of Fresh Water.”

More and more people in the densely populated countries of China and India are consuming beef, pork and chicken, for example. In China, the rise in eating meat is being correlated to more of its people improving their socioeconomic status.

Here’s more of what Nestle had to say about the “potentially catastrophic” direction, according to Reveal’s review of the secret 2009 document:

Global water shortages are just around the corner.

“Nestle thinks one-third of the world’s population will be affected by fresh water scarcity by 2025, with the situation only becoming more dire thereafter and potentially catastrophic by 2050.”

Major regions, including in the United States, are being drained of their underground aquifers.

“Problems with be severest in the Middle East, northern India, northern China, and the western United States.”

“Nestle starts by pointing out that a calorie of meat requires 10 times as much water to produce as a calorie of food crops. As the world’s growing middle classes eat more meat, the earth’s water resources will be dangerously squeezed.”

See five more takeaways from the report on the Reveal page.