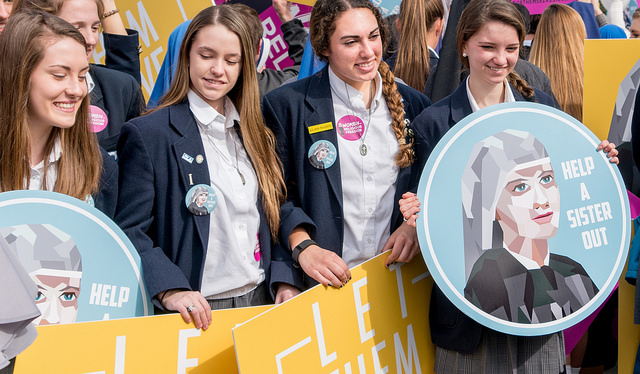 The United States Supreme Court unanimously decided that it doesn’t want to decide on the case concerning a nonprofit religious organization’s objection to providing free contraceptive coverage through the Affordable Care Act.

Zubik v. Burwell was sent back to the lower courts to be settled.

The Obama administration had already decreed that religious nonprofits could opt out of providing the care by providing the government with a two-page form stating their objection. However, the nuns at Little Sisters of the Poor found that this, too, was complicit, and filed a lawsuit.

Following oral argument, the Supreme Court asked both parties “whether contraceptive coverage could be provided to petitioners’ employees, through petitioners’ insurance companies, without any such notice from petitioners”.  Both the petitioners and the government replied that such an outcome was “feasible”.

From the unsigned opinion:

“Petitioners have clarified that their religious exercise is not infringed where they ‘need to do nothing more than contract for a plan that does not include coverage for some or all forms of contraception,’ even if their employees receive cost-free contraceptive coverage from the same insurance company… The Government has confirmed that the challenged procedures ‘for employers with insured plans could be modified to operate in the manner posited in the Court’s order while still ensuring that the affected women receive contraceptive coverage seamlessly, together with the rest of their health coverage.’”

The Supreme Court did not take a position on the distinction of Zubik v. Burwell — that is, if the Affordable Care Act “substantially burdens” the religious freedom of non-profits.

“The Court expresses no view on the merits of the cases. In particular, the Court does not decide whether petitioners’ religious exercise has been substantially burdened, whether the Government has a compelling interest, or whether the current regulations are the least restrictive means of serving that interest.”

The petitioners and the Obama administration are now responsible for reaching a “compromise” in the lower courts. That decision will have a far-reaching effect on healthcare coverage provided by religious nonprofits, such as religiously-affiliated universities and hospitals.