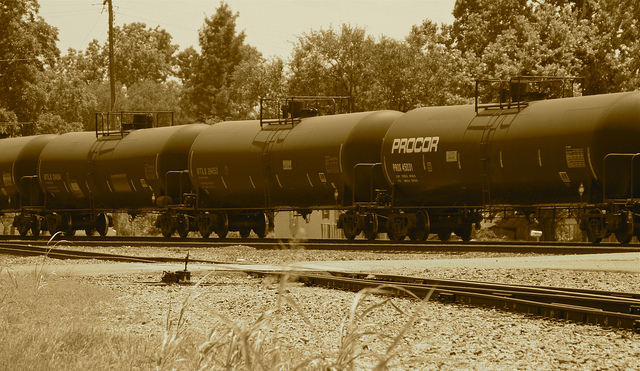 Another train bites the dust.

It was a busy week for crude-by-rail news. Once again we saw images of fires and massive clouds of black smoke ballooning into the air after another train derailed in a small North Dakota town. That's at least six crude oil trains that have derailed in North America this year.

This latest derailment happened days after the the federal government, under intense public pressure, announced a two-year-in-the-making rule package to boost crude-by-rail safety, which many, including some environmental groups and the railroad and oil industries, are unhappy with.

Tank cars involved in the latest North Dakota derailment, CPC-1232s, which have exploded in other accidents this year, will be allowed to stay on the rails until 2020, according to The New York Times.

The crude oil that sparked fires on a derailed North Dakota train this week was less flammable than required by a new state law that went into effect last month. The oil contained about 20 percent fewer gases than the standard requires and indicates that the new rule may not go far enough, according to Reuters.

Let it burn. That's what firefighters have to do when trains carrying Bakken crude oil derail. They're just too intense to fight, firefighters have said, according to Inforum. That begs the question, what would a crude oil train derailment mean for a big city?

Details about crude oil train shipments will be kept from the public under new federal rules announced last week by the U.S. Department of Transportation. Last year the feds ordered railroads to release that information to state officials, and then many states, including Pennsylvania, made the information public. But the new rules end that requirement, make the information exempt from federal and state public records laws and instead require the information be given only to emergency response officials, according to McClatchy.

The largest firefighter's union in the country says the new federal rules for crude-by-rail won't allow firefighters to effectively respond to accidents, according to the Huffington Post.

Norfolk Southern's CEO said the federal government made "serious mistakes" in the new crude-by-rail rules. They are too restrictive and make shipping oil incredibly expensive, he said. The rail industry plans to challenge them, according to The Wall Street Journal.