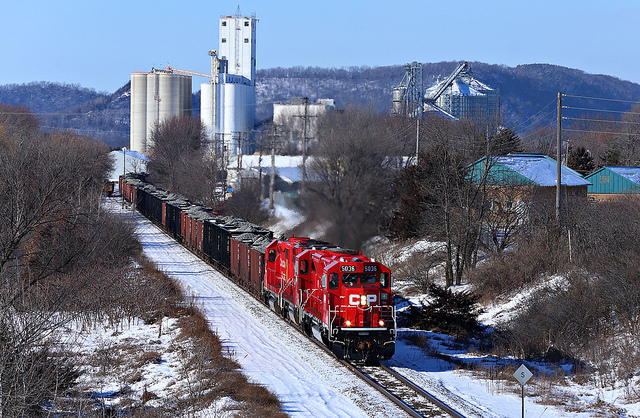 A train on a snowy railway in Minnesota.

Ian Goodman, president of a Berkeley-based company for energy consulting, told Bloomberg Business that water and pipeline deliveries are much more popular. “The economics of crude-by-rail are very poor right now,” he said.

There’s no word on what led to a derailment Tuesday night on the Canadian Pacific Railway near Reno, Minn. Six of the 15 cars that derailed fell into the Mississippi River and dumped 850 gallons of soybean oil into the water. Crews have transferred oil remaining in the cars into empty tankers and have set up containment stations and booms to catch oil.

Three of the derailed cars were carrying sodium chlorate — a chemical compound used primarily to bleach paper that the Department of Transportation classifies as hazardous.

One representative from the U.S. Fish and Wildlife Service told Wisconsin Public Radio that railway incidents in the area are becoming detrimental to local fisheries and bird habitats.

California’s Bay Area is gearing up for two key votes in February that could allow crude oil produced by Canadian tar sands to travel by rail through Benicia and San Luis Obispo counties. The San Luis Obispo County planning department has already recommended a “no” for the voting meeting scheduled on Feb. 4.

Energy supply company, Global Partners LP, has responded to the plunge in oil prices and a 21 percent drop in its stock price by laying off 8 percent of its workforce. It has also switched to producing only ethanol at its crude oil and ethanol facility in Oregon. Global Partners also cut its distribution and may weed out some of its gas station and convenience store partners.