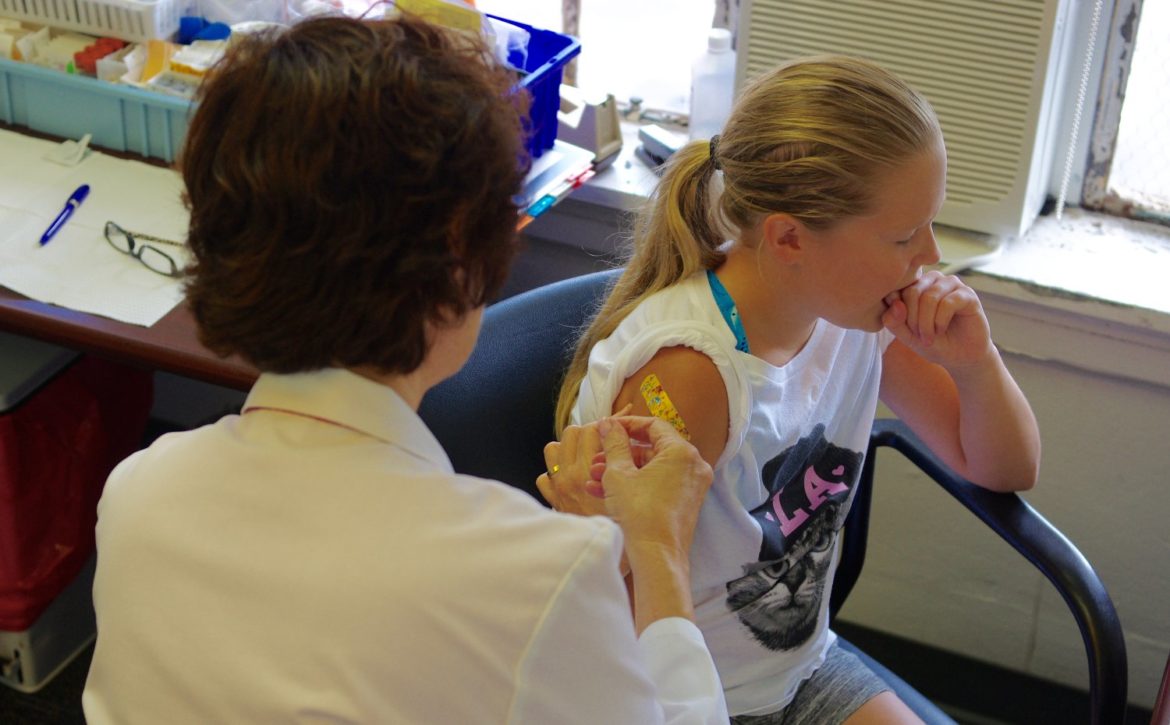 It has the potential to prevent thousands of cancer cases every year, but nine years after the rollout of the HPV vaccine, the response is still lagging. Many parents are delaying or refusing the vaccine for their kids, and some family doctors are uneasy — or ineffective — at recommending it.

Human papillomavirus, or HPV, causes most cases of cervical cancer, as well as other genital cancers in men and women, and about 360,000 cases of genital warts in the U.S. every year.

But the vaccine for HPV, which studies have shown to be safe and effective, has not been a runaway success. Uptake is far below the national target of 80 percent coverage by 2020.

In Pennsylvania, while coverage rates for most other adolescent vaccines are above 90 percent, just 48 percent of girls have completed the three-shot HPV series, and only 26 percent of boys, according to the U.S. Centers for Disease Control and Prevention (CDC).

Human papillomavirus, or HPV, is a virus spread through intimate skin-on-skin contact. Most sexually active adults will have one form of HPV at some time in their life. Many people never know they are infected, and most HPV infections clear up on their own.

HPV causes most cervical cancers; cancer of the vulva, vagina, penis and anus; and oropharyngeal cancer, which affects the back of the throat, tongue and tonsils. HPV also causes genital warts, which affect 360,000 people in the U.S. every year.

To Dr. Jonathan Pletcher, clinical director of adolescent and young adult medicine at Children's Hospital of Pittsburgh of UPMC, those figures are baffling.

“The most shocking thing, when you think about it, is the evidence is so clear on how beneficial the vaccine is, and above and beyond what the manufacturers touted 10 years ago,” he said. “It’s hard to find a success like this, particularly when you’re focusing on preventing cancer.”

The state’s coverage rate for the HPV vaccine is higher than the national average of about 40 percent for girls and almost 22 percent for boys, according to the CDC.

Too young for a ‘sex shot’

Pittsburgh pediatrician Sharon Cowden, a fellow of the Pennsylvania Chapter of the American Academy of Pediatrics, said many parents don’t understand that getting the shots well before exposure to HPV provides the best immune response.

“You don’t know what your child is doing, nor do you know when they’ll be sexually active,” she said. “If you’re waiting until they’re 16 or 17 then you’re waiting too long.”

Concerns that the vaccine was a license for promiscuity plagued early publicity, with headlines calling it a “sex shot,” and Christian conservative groups saying it would undermine messages of abstinence. Studies since have shown receiving the vaccine doesn’t lead to any increase in sexual activity.

Pittsburgh nurse Ann Hall had her twin daughters vaccinated for HPV at age 11, but deferred when the vaccine was first offered at age 9.

As a Christian parent, she said it was too soon to talk to her kids about vaccination for a sexually transmitted disease. “I think a lot of faith-based homes would agree and say that 9 is too young,” she said.

Hall still wanted her children to be protected, though. “We teach abstinence and waiting until marriage, but I’m a realist,” she said. “Just because you are abstaining from sex doesn’t mean that your [future] partner did, so that’s a risk.”

Washington County mother Toni Hartley said her children, Jordan, 21, and Morgan, 16, were both immunized for HPV, and Hartley said she didn’t see any reason to make the issue about sex: “I had separate conversations about protecting yourself and making good choices, but I don’t relate the two together at all.”

The uneasiness about sex extends to doctors, too. The awkwardness of discussing sex with preteens and their parents is seen as one of the main reasons doctors are not recommending the vaccine as strongly or as often as other immunizations.

According to the CDC, missed clinical opportunities is the top reason for the low HPV uptake.

“I think the biggest issue comes back to providers aren’t comfortable because they think they’re going to have a talk related to sexual intercourse,” said Dr. Todd Wolynn, a pediatrician from Kids Plus Pediatrics in Pittsburgh.

Wolynn, who sits on an HPV advisory board for Merck, the drug company that makes the HPV vaccine Gardasil, said providers need better education and guidance.

“We need to teach providers that first and foremost, it’s an anti-cancer vaccine,” he said. “Recommend it in the same way you would recommend [the] meningitis vaccine.”

Wolynn also sits on the HPV advisory board for the Jewish Healthcare Foundation, a contributor to PublicSource that leads an effort to increase HPV vaccination rates in Allegheny County.

Dr. Jennifer Preiss, a pediatrician at the Allegheny Health Network, said she starts talking to parents when their child is 9, with the expectation many will delay until 12, when there is a gap in the immunization schedule.

Click here to learn more about the HPV vaccine.

“Some also say, ‘I don’t want to overload the immune system,’” she said. “The protein and antigen load that we give our children is much less today. The vaccines are much cleaner; they have less junk in them. I don’t think it’s a valid argument.”

Yvette Yescas, a mother from Pittsburgh’s South Hills, said she delayed vaccinating her daughters out of concern it might be found that the immunity doesn’t last as long as thought.

Daughter Vivian Salvucci, 14, had the vaccine at 13, and younger sister Billie, 12, will have it at the same age.

Yescas said she knows other parents who would otherwise vaccinate their children, but refused HPV out of concerns it was too new. “They don’t feel there has been enough time to really research it and understand it,” she said.

Yescas said she had no concerns about the vaccine itself, although reports that kids were fainting immediately after the shot did give her pause.

The vaccine has been associated with increased incidents of fainting, and is reported to hurt more than other shots, Wolynn said.

But he also pointed out that there is now a decade of robust safety data on the vaccine: “I don’t think people realize we have 10 years of data now. It’s not that new.”

The push for mandating

Vaccination for HPV is not required for school attendance in Pennsylvania, and efforts to mandate the vaccine have been mired in controversy.

In Pennsylvania, it was met with vocal opposition, said Pletcher, who served on a Department of Health task force assessing whether the vaccine should be mandated in 2007 and 2008.

“At that time, we didn’t have all the data,” he said. “A lot of people showed up and were very vocal that not only should this vaccine not be mandated, but no vaccine should be mandated because that takes away the rights of parents.”

Pletcher said the political appetite for mandating the vaccine collapsed after a failed bid in Texas in 2011, which made national headlines when then-Republican presidential candidate Michele Bachmann claimed, based on a conversation with a parent, that the vaccine could cause developmental disabilities.

Cowden said Bachmann’s comment — for which the pediatrician says there is no evidence — still resonates with parents. “People don’t understand,” she said. “They go with their gut fear, rather than their understanding.”

Daniel Torisky, president of the Autism Society of Pittsburgh, said fear works the other way, too, compelling many parents to excessively vaccinate their children.

“The position I tell parents is, by all means, get the vaccines, but get them separately and space them out and from a standpoint of whether it’s likely to be a threat,” he said.

Vaccine-manufacturer Merck was also accused of fueling controversy by lobbying for Gardasil to be mandated. In a statement, Merck said it suspended its state-level lobbying in 2007 “because debates in some states focused on these efforts instead of how to help protect females against cervical cancer.”

The delay in recommending the vaccine for boys added to the confusion, she said. The vaccine was approved for boys in 2009, three years after it was for girls. It wasn’t recommended for boys by the CDC until 2011.

Merck said it has always focused on cancer prevention.

But U.S. Assistant Surgeon General Anne Schuchat said in a statement that a handful of areas had made larger gains, showing it was possible to do better. In general, vaccine coverage in girls improved in D.C., Illinois, Montana and North Carolina. In D.C, three-dose coverage for girls increased by about 29 percent.

However, in Tennessee, three-dose coverage for girls dropped by 16 percentage points, according to the CDC. “We are missing crucial opportunities to protect the next generation from cancers caused by HPV,” Schuchat said.

In Pennsylvania, efforts include community-led projects, such as those by the Macedonia Family and Community Enrichment Center, which held a health fair in the predominantly black Hill District of Pittsburgh in August, and the group plans to screen a film about HPV at 1 p.m. Sept. 19 at the Kaufmann Center.

The center’s executive director, Trisha Gadson, said the major barriers for families are lack of information and poor access to health care overall.

“Even though children can always get coverage, when you have various family members who aren’t covered by insurance, we tend to find that the whole family doesn’t receive medical care,” she said.

The Allegheny County Health Department offers a year-round vaccination clinic, and last month it took part in a statewide push to get kids up to date before starting school.

At the clinic, Michelle Gilliland’s daughter, 11-year-old Kailey Byrnes, had five vaccinations in preparation for sixth grade, including her first dose of HPV.

Gilliland, a nurse, has had treatment for precancerous cervical lesions. “So I know that it’s something that she needs.”

The Jewish Healthcare Foundation’s HPV Vaccine Initiative has been a key driver in spreading information through health fairs, and mobilizing a local chapter of Grandmother Power to help spread the word in religious groups and local communities.

“We want to understand why the message is getting out there and the job is getting done in those areas,” she said.

Feinstein said, with consistent effort, a 70 percent coverage rate could be achievable for Allegheny County.

“I think that eventually reason will settle in,” she said. “I just don’t know how much damage will be done in the meantime.”

What is the HPV vaccine?

Another vaccine, Cervarix, produced by GlaxoSmithKline, is approved for girls and women age 9 to 25 and protects against two types of HPV that cause 70 percent of cervical cancers.

The vaccine is typically covered by insurance or by the federal Vaccines for Children Program. The focus of vaccination efforts remains on 11 and 12 year olds.