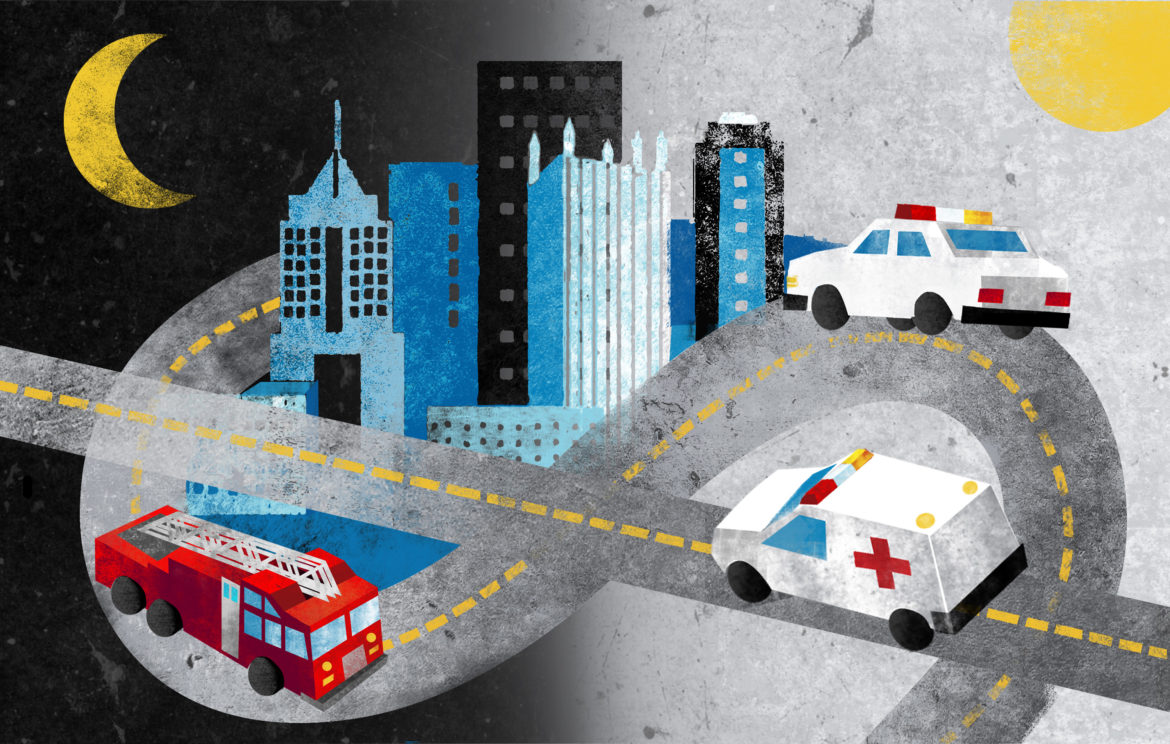 An emergency medical services crew chief, whose salary totaled about $53,000 before Thanksgiving last year, netted an additional $135,000 in overtime and holiday pay from the city of Pittsburgh.

And Mayor Bill Peduto — who makes $107,500 and is normally the third highest-paid city employee — doesn’t rank among the city’s 300 highest-paid employees when you factor in overtime.

It’s a symptom of hiring not keeping up with retirements, resignations or an increasing workload.

“It's like a train running down the tracks and you've got to keep running after it,” City Controller Michael Lamb said about the constant need for public safety hires.

Employees in the city’s police, fire, and emergency medical services (EMS) bureaus rack up extra hours when those bureaus are understaffed for a particular shift or in general.

Police, fire and EMS in 2014 all exceeded their budgets for overtime and holiday pay and any other type of pay above an employee’s normal rate, referred to as premium pay. It is possible that all three will have exceeded their premium pay budgets in 2015, too; those year-end figures are not yet available.

Pittsburgh city employees earned nearly $30 million on overtime, holiday pay and other types of premium pay in 2014. The city was on pace to pay a similar amount last year.

When there’s a large amount of overtime, Lamb said that beyond the financial implications, there are concerns for the welfare of employees. Employees working jobs where lives are at stake.

The city has not made it any easier on its current workers. Only recently have they projected workforce turnover into 2017. That limited planning may not be sufficient given the numbers of public safety workers on the brink of retirement. In the police bureau, more than 40 percent of officers could retire today with full pension benefits, according to Howard McQuillan, president of the Fraternal Order of Police Fort Pitt Lodge No. 1. It’s a similar percentage in the EMS bureau, and more than a third of the fire bureau could retire with their pensions.

The chiefs of the police, fire and EMS bureaus would not comment for the story.

At first glance, it looks like the police bureau paid $18.3 million in premium pay compared to a budget of $7.3 million in 2014. However, city budget director Sam Ashbaugh said roughly $10 million of that $18.3 million was earned through police officers working secondary employment.

Police officers can work off-duty as security at a bar, for example, and that’s called secondary employment. Those establishments pay the city for the officer’s time through the Secondary Employment Trust Fund, which exists separately from the public safety budget.

Money earned by individual officers through private employers is combined with money earned by working an overtime shift for the city into a broad label of premium pay.

“I don't know how they accurately forecast what our premium pay would be if they comingle secondary employment with actual city overtime,” McQuillan said.

The bureau also remains understaffed with the struggles of hiring enough police officers chronicled for years.

McQuillan estimated the current workforce at around 840 officers at the beginning of 2016.

Peduto’s goal since he took office in January 2014 has been to have 900 officers on the force.

“The administration and the police bureau are working to stack classes this year to bring on 120 recruits, which will finally get the bureau over 900 officers, while also seeking a new, long-term training facility that will make it easier to bring on more classes in the future,” Tim McNulty, the mayor’s spokesman, wrote in an emailed statement.

“We need to plan,” Ashbaugh said. “We can't be in a reactive mode.”

That mindset is important for the police bureau. If the city needs more snow plow drivers, it can hire them quickly and get them on the roads. But in the police bureau, it takes a new hire about 11 months to go from recruit to officer.

Henry Sciortino, the executive director of the Intergovernmental Cooperation Authority, which is one of the city’s state-appointed financial overseers, said the city is making progress toward using technology to better manage its workforce and save money.

“That is the essence of why the ICA has continually expressed, in numerous forms, the absolute urgency and need for creating a comprehensive financial management system,” he said.

The EMS bureau is almost fully staffed, yet it exceeded its overtime budget more than police and fire. The bureau has at least 167 employees for its 180 budgeted positions and spent $5.7 million in overtime pay in 2014, more than double its $2.6 million overtime budget.

It also surpassed its yearly overtime budget during the first 11 months of 2015.

The bureau, staffed by paramedics and crew chiefs, responds to medical emergencies, accidents and rescues.

Unlike fire and police, Ashbaugh said the EMS bureau could be more nimble in hiring certified paramedics because they don’t need to be hired as a class like police and fire.

However, with only about a dozen additional EMS positions in the budget that remain open, it is questionable how big of an impact those few hires could make.

In his introductory remarks from mid-January, new Public Safety Director Wendell Hissrich talked about overworked employees and an increasing number of EMS calls. The city’s EMS bureau responded to nearly 68,000 calls for medical or rescue assistance in 2015, according to the city’s 2016 operating budget. In previous years, the city said the bureau typically responded to 55,000 calls per year.

“Whatever we can do to make the professionals' lives easier, I hope to accomplish that," Hissrich said, according to the Pittsburgh Post-Gazette.

If EMS calls are increasing, Sciortino said he would ask questions like where are the calls coming from and how is the city reconfiguring its resources to match.

“You manage for the need,” he said. “Everybody involved in the equation in city hall is trying to do that. They just need to get the right tools in place.”

Controller Lamb called overtime spending “out of control” when he examined the fire bureau in 2012. In the two years examined by his department, the fire bureau exceeded its overtime budget by 5 percent and 14 percent in 2010 and 2011, respectively.

In 2014, the fire bureau exceeded its overtime budget by 21 percent.

Overtime pay could have an effect on city finances for years to come because the Pittsburgh fire bureau allows overtime pay to be included as salary for increased pension benefits. If someone close to retirement earns a lot of overtime to boost their salary, they will receive the benefits of that worked overtime for the remainder of their lives.

Part of the reason is that fire is the only bureau that has a mandated minimum number of staffers. They must have 163 people, at varying levels of experience, working at any given time.

There are many factors that can make it difficult for the bureau to reach that 163-person minimum without overtime. Injuries, vacations and time off for training are all factors.

For instance, seven firefighters were injured Jan. 1 battling a fire in Wilkinsburg. That will reduce the pool of people able to fill those mandated positions.

There were about 610 employees, plus any administrative staff, in the fire bureau, as of November, according to city salary data. A class of 32 recruits recently graduated, and another class is on course to graduate in February, said Ralph Sicuro, union president of International Association of Firefighter Local No. 1.

Sicuro said the bureau is staffed at the bare minimum and the overtime can take a physical and mental toll on them.

“There is an absolute human cost to working large amounts of overtime,” he said. “Your body gets run down more … then there's the mental side of things. The calls you go on are stressful. The anticipation of a call is stressful.”

In Donald Konkle’s 27 years as fire chief in Harrisburg, he said there was no conclusive way to know when his employees were overworked.

“I don't know if there a formula to do that,” said Konkle, now executive director of the Pennsylvania Fire and Emergency Services Institute, a nonprofit association of emergency service organizations.

In Harrisburg, the department was small enough — about 100 employees — that he could walk around the fire grounds and see if anyone was too tired.

He said another good indicator was if employees refused overtime opportunities and he had to mandate overtime.

Konkle guessed if people were ready to do more overtime, they probably weren’t being overworked.

Though he did add, “There's a lot of people, if you dangle a dollar, they'll stand in line all day.”