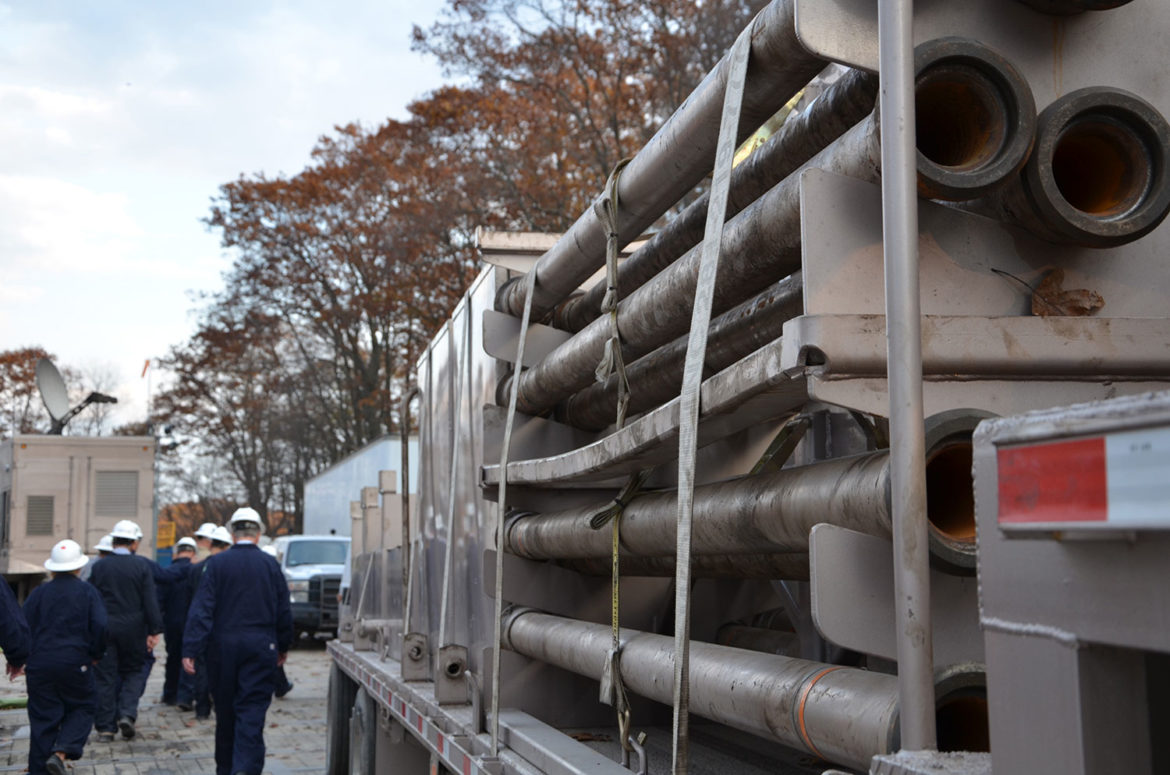 In September, Range Resource agreed to pay the Pennsylvania Department of Environmental Protection the largest sum ever levied against a driller for violations stemming from six of their fracking wastewater impoundments in Washington County. The driller was ordered to close five impoundments and upgrade two others to new state standards.

In January 2014, the Corbett administration asked the state’s highest court to reconsider its 2013 decision that parts of Act 13 were unconstitutional. (Act 13 is  Pennsylvania’s oil and gas law.) The court decision threw out the part of the law that  created statewide zoning rules for where drilling could be done. Now local municipalities have regained that right. Those local areas are now debating how to create appropriate zoning regulations and some local authorities are being sued by citizens, as this recent PublicSource article showed.) See the court’s denial here.

Landowners leasing to Chesapeake Energy have accused the driller of cutting royalty payments and stealing money. A March 2014 ProPublica investigation revealed that the company, facing financial failure, raised nearly $5 billion by ripping off landowners who leased gas rights to the driller. The state Attorney General’s Office is apparently investigating the company, although it is being very hush hush about it, and Chesapeake recently disclosed that it is being investigated by the U.S. Department of Justice.

It was an historic event: In four decades, no Pennsylvania incumbent governor has been a situation where he failed to be re-elected or to pass the reins to someone in his own party. In a more than $80 million election that broke the Pennsylvania campaign spending record, Democratic businessman Tom Wolf ousted Republican Gov. Tom Corbett, according to state campaign finance data analyzed by PublicSource. The natural gas industry blossomed under Corbett’s tenure, with around 6,000 wells drilled since 2011, which is about double the number of wells wells drilled in the previous four years.

Governor-elect Tom Wolf campaigned on the promise of implementing a 5 percent severance tax on natural gas. In a focal point of his campaign, he said he’d use those funds, which could bring in a whopping $1 billion, to boost funding for education. Wolf said the tax would bring in more money than the state’s current impact-fee system. However, the Associated Press reported in early December that the $1 billion number may be inflated.

In October, Baker Hughes announced it would disclose 100 percent of the chemicals it uses for hydraulically fracturing shale rock. Environmental groups praised the Houston-based oil services company for its move towards transparency. However, the company recently announced it will merge with Halliburton and it’s unclear whether the practice will continue.

7. Drilling kicks off at Pittsburgh airport

In August, Consol began drilling on the 9,000 acres of county-owned land at Pittsburgh International Airport. Consol has plans for four well pads and a total of 47 wells. The project should rake in a bundle for Allegheny County. Consol projects drilling at the airport to bring $1 billion to the region. That includes a $50 million bonus payment and 18 percent royalties to the Allegheny County Airport Authority, as well as $500 million in capital spending by the company, according to the Pittsburgh Post-Gazette. Environmental groups and some residents of nearby Moon township opposed the project.

On Feb. 11, a Chevron well exploded in Dunkard, Pa., in Greene County, killing Ian McKee, a 27-year-old gas worker. The blowout caused a fire that burned for days. Chevron employees then went door to door offering gift certificates for free pizza and 2-liter sodas. Outside environmental groups slammed the PR effort and started an online petition demanding that the driller apologize to residents. The Associated Press reported at the time that Chevron had made the offer to apologize for traffic congestion the blowout had caused, not to downplay the loss of life.

Former Pennsylvania Department of Environmental Protection Secretary Christopher Abruzzo resigned in October after being named one of the state officials who sent and received pornographic emails.

Abruzzo was one of eight officials named as part of an investigation by Attorney General Kathleen Kane. The attorney general’s office released the names after a court battle and public records requests from several news organizations.

In May, Gov. Corbett issued an executive order lifting a 2010 moratorium former Gov. Ed Rendell had implemented barring any further leasing of Pennsylvania state and forest lands for drilling. The order said it would only support drilling which results in “no or minimal surface impact to commonwealth-owned land.” Corbett had said new leases could raise around $95 million for the state budget, but the order has been  halted by two lawsuits filed by separate environmental groups. Also, Governor-elect Tom Wolf said he supports maintaining a moratorium on new leases on state park and forest lands.