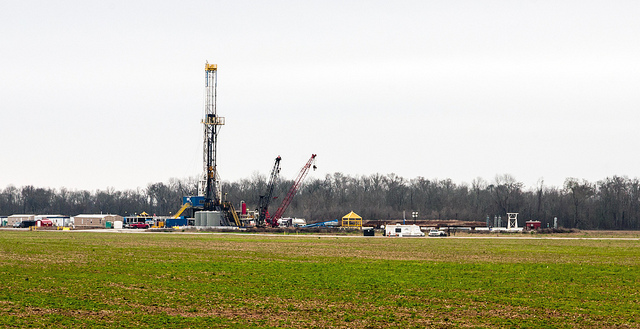 This week two studies were published about unintentional methane emissions from oil and gas operations.

A University of Texas-led study found that a small number of active natural gas wells are responsible for the majority of methane emissions.

Some experts say both carbon and methane must be addressed in order to tackle the effects of climate change. Researchers are still studying how to best track methane emissions and how much it leaks into the atmosphere.

These studies provide a better understanding of methane emissions from both current and legacy oil and gas operations.

Methane is the second most emitted greenhouse gas in the U.S. Although methane doesn’t stay in the atmosphere as long as carbon dioxide, it’s more efficient at trapping radiation, which makes it a major contributor to global warming.

In 2012, methane made up about 9 percent of total greenhouse gas emissions. Oil and gas operations leak the most methane, but the potent gas also leaks from landfills and livestock, according to the U.S. Environmental Protection Agency.

For the Princeton study, researchers measured methane leaking from 19 abandoned wells in the Northwestern Pennsylvania counties of Mckean and Potter. Only one of the wells was on the state’s Department of Environmental Protection list of abandoned and orphaned wells.

This is the first study to look at methane emissions from abandoned oil and gas wells, according to the authors.

All of the wells they tested emitted some methane, but about 15 percent of the wells emitted at a significantly higher level. Researchers calculated that abandoned oil and gas wells in Pennsylvania make up about 4 to 7 percent of the state’s total methane emissions coming from human sources.

Currently, there is no regulatory requirement to monitor or account for methane emissions from abandoned wells in the United States, according to the study.

“Additional measurements of methane emissions from abandoned wells and their inclusion in greenhouse gas inventories will aid in developing and implementing appropriate greenhouse gas emission reduction strategies,” the researchers said in the study.

The University of Texas study looked at two major sources of methane emissions at oil and gas sites in the U.S.: Liquid unloadings and pneumatic controller equipment. The first is a process to clear accumulated liquids from a well to continue producing gas. The second is an instrument commonly used in oil and gas operations that is often powered by natural gas.

(The University of Texas-led study received funding from the natural gas industry and the Environmental Defense Fund.)

From a press release on the study:

“To put this in perspective, over the past several decades, 10 percent of the cars on the road have been responsible for the majority of automotive exhaust pollution,” Allen said in the press release.

“Similarly, a small group of sources within these two categories are responsible for the vast majority of pneumatic and unloading emissions at natural gas production sites.”

The researchers also found that methane emissions from pneumatic devices were highest in the Gulf Coast and lowest in the Rocky Mountain region.