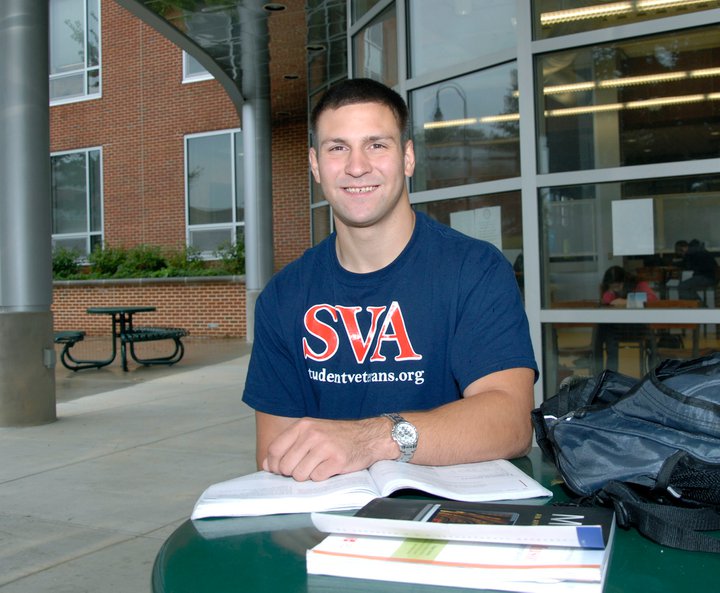 On his first day as a freshman at Shippensburg University in January 2009, Joshua Lang rose at 5:30 a.m., worked out, dressed in slacks and a button-up shirt and headed off to his psychology class.

He was surprised to find that students at the south-central Pennsylvania school wore sweatpants and looked as if they were recovering from the night before. It was not the learning environment he had envisioned.

“I felt like the room was closing in on me. I understood what the opportunity was, and I wanted to take advantage” of it, said Lang, 25, who was a cavalry scout in the 82nd Airborne Division of the U.S. Army, serving in Afghanistan from January 2007 to April 2008. “I was kind of depressed, frustrated. … It took me a few months to get into the swing of things.”

Lang, now a senior majoring in political science, is one of 22,614 Pennsylvania veterans who used their education benefits last year.

The benefits of the Post-9/11 GI Bill (the law’s latest version) for Pennsylvania veterans alone totaled $221 million over the last two years, while more than $4 billion was used for 600,000 beneficiaries nationwide during the same time period.

Veterans, who tend to be older and more focused than traditional students, are using their GI Bill benefits as a pathway to jobs, careers and a more secure economic future.

But the transition from a desert war zone or an enemy city to the green lawns of academia brings with it a new set of challenges. These veterans as students are adjusting to a more independent lifestyle, coping with friends and colleagues who are unfamiliar with what they’ve been through and feeling different from their peers. They often carry the burdens of isolation, depression and post-traumatic stress with them.

One thing they often don’t share with other students, though, is leaving college with a degree and a load of debt. The Post-9/11 GI Bill pays for tuition, books and living expenses, such as rent, while a veteran goes to college or trade school. Veterans have 15 years to use their benefits, or prior to their retirement, they can transfer the benefits to their children or spouses.

Lang, for example, receives $1,000 a year for books and $1,220 a month for housing while he is in school. His tuition and fees at Shippensburg, $4,428 per semester this year, are sent directly to the school from the Department of Veterans Affairs.

Lang, however, said sharing a dorm room with a 19-year-old, for him, was difficult.
“It was hard to relate,” Lang said.

An email from a member of the national Student Veterans of America, an organization that provides resources and support, asked Lang to start a chapter at Shippensburg. That made his second semester different from his first.

The Student Veterans of America and its 20 Shippensburg members helped Lang connect with other veterans and gave him one of his best college experiences, he said -- an event the group hosted on Sept. 11, 2010.

They collected 5,000 American flags, one for each American death in the War on Terror, and displayed them on the campus lawn for an event. In addition, they gave donation jars to local businesses to “sponsor a fallen hero.”

“I felt involved,” Lang said. “I felt like I had a purpose again.”

Because of the influx of veterans using the Post-9/11 bill, the Department of Veterans Affairs has had trouble processing the number of benefits requests.

More than 400,000 student veterans applied for benefits in the spring, and approximately 90 percent had received payment, according to a veterans spokesman.

But, in a March 8 statement, Keith Wilson, director of the VA’s Education Services, said: “We have heard from some veterans who are experiencing delays in receiving their benefits for the spring term …. We have received more enrollments than we had anticipated at one of our regional processing offices.”

The VA, he said, was working overtime “to address the issue immediately.”

Dan Rota, a retired brigadier general and the director of veterans education and training services at Robert Morris University in Moon, said he constantly warns veterans about potential delays with living stipends and book money.

“We tell [students] every year, ‘be prepared. You are dealing with the government,’” Rota said. “Not that the government is a bad thing. They get overwhelmed.”

Rota and two of his colleagues established a Veterans Emergency Fund to help veterans who were struggling financially. Rota said that about 10 or 11 veterans have used the fund since then.

The fund has been used, for example, to buy a meal ticket for a student. Rota declined to name the veteran out of respect for his privacy.

Administrators and former veterans at universities across the state have developed new offices and services to help veterans going back to school.

Brad August, a student at Indiana University of Pennsylvania, works in the Veterans’ Student Liaison Office.

After joining the Air Force in 1999 at 22, he served in Germany, Bosnia, Kurdistan and Iraq.
Now 34, he is studying safety sciences and gives veterans financial aid advice and helps out at the Veterans Affairs Office.

“What you get out of other veterans is a certain level of comfort,” August said. “You form a kinship with other members of the military.

Some veterans rely on the support of family and friends to get through the transition from a battlefield to a campus.

Justin Bakow, 24, served in Iraq and Afghanistan as an infantry sniper and now attends La Roche College. He attributes his smooth transition to academia to the support of his fiancee and family members.

But he said he understands that some veterans have trouble connecting with their younger, less experienced peers.

“Those 18, 19-year-old kids are nothing like you. You shouldn’t expect them to relate to you,” Bakow said. “Treat them with respect. They made their decision and you made yours. There is no reason to look down on anybody who hasn’t served in the military.”

Cory Shay, the student success facilitator at the Community College of Allegheny County, works with faculty and students to ensure that veterans can cope with college life.

“We get veterans who are still suffering from disabilities that affect their class work,” Shay said.

One veteran student was having trouble getting out of bed in the morning because of post-traumatic stress disorder, Shay said. After hearing the student’s concern, Shay brought the professor and student together and the student was allowed to make up the work. Shay declined to name the student and professor.

Community colleges often serve as a transitional step between the military and academia.

When veterans return, it may have been years since they faced a math problem or wrote an essay. Because of this, many veterans go to community college first. Most community colleges have open enrollment, so students can get in more easily than they could to universities.

William Cole left the military in November 2007. He juggled a construction job and classes at two community colleges in California. He was then accepted at the University of California, Santa Barbara.

“In high school, I didn’t have a chance of getting into any college,” Cole said. “Community college helped me in that way.”

Cole, now 29, is taking classes at the University of Pittsburgh’s Graduate School of Public and International Affairs, where he said he has a 3.4 grade-point average.

Cole has one more year of graduate school at Pitt, and then he hopes to work on public policy and veterans issues.

“I guess I always felt I could make a bigger impact ... by getting an education,” he said. “I definitely feel fortunate that I stuck with school. I feel like I made the right decision.

Dakow, a freshman in the national securities studies program at La Roche, is learning to analyze and interpret data. He is currently a sergeant sniper team leader in the National Guard and plans to continue with the military or at a law enforcement agency, such as the Federal Bureau of Investigation.

It is still relatively early in August’s college career at Indiana University, but he hopes his safety sciences degree will give him skills he didn’t get from the military. The training will allow him to oversee environmental safety in workplaces.

He had worked in security in the military and could have looked for a job in law enforcement, as many of his friends did, but he wanted to go to school and use his veterans  benefits.

“I wanted to still help people but take the law enforcement out,” August said. “When you have a wife, she doesn’t want to be awake at 2 a.m. wondering if you are coming home.”

He currently works as an intern in the office of state Sen. Dominic Pileggi, R-Delaware.

“Local leaders benefit a society. That is where I want to start,” Lang said. “Hopefully in the future, I’ll become a politician. ...This is really what I want to do: to continue serving my country, just on a different platform.”