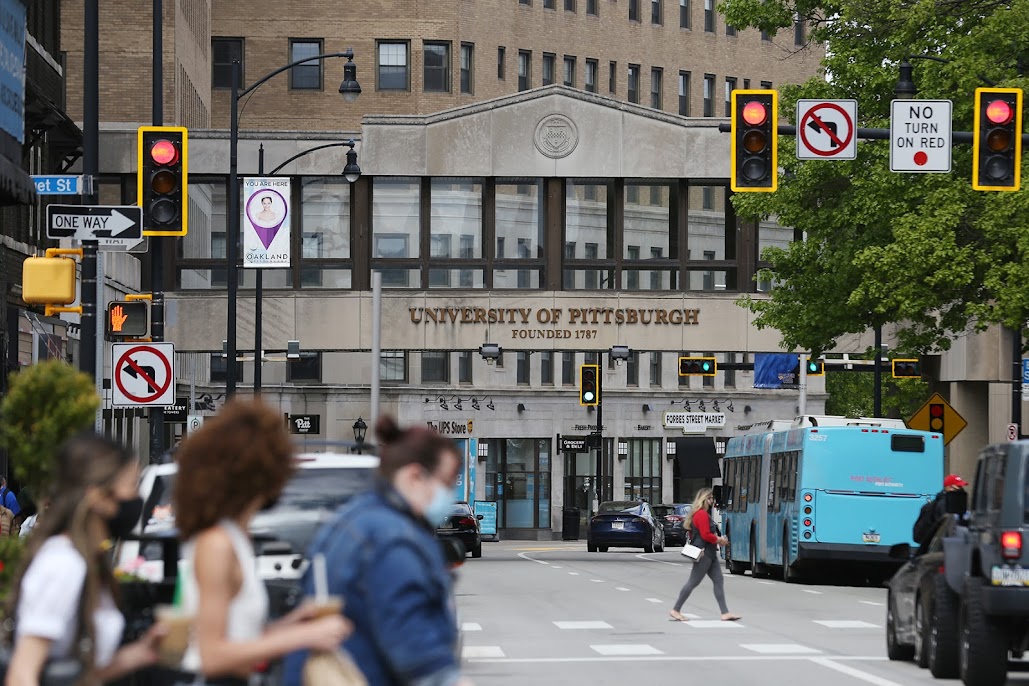 Black tenured professors at the University of Pittsburgh could all fit in a small classroom. (Photo by Ryan Loew/PublicSource)

As colleges and universities face demands to address racial inequities, there's one stark gap at nearly every campus in Southwestern Pennsylvania.

PublicSource looked at the 21 colleges and universities in Southwestern Pennsylvania that self-reported statistics on tenured professors to the U.S. Department of Education. All together, they had more than 3,600 tenured faculty members in fall 2019. Just 101 of them — about 3% — were Black.

In Allegheny County, Black residents make up 13% of the population, more diverse than the surrounding area, though less so than Pittsburgh, which is 22% Black. The combined student population of the campuses surveyed is 7% Black.

At many universities in the region, there are little to no Black tenured professors, according to the federal data released earlier this year. Some colleges like Carlow or Saint Vincent College, reported having no Black professors with tenure. Other universities, like Robert Morris University, only reported one.

In fact, at the majority of Pittsburgh-area colleges, you can count on a single hand the Black professors who hold tenure. Even at the University of Pittsburgh’s main campus, the region’s biggest university by far, all the Black tenured professors would fit in one average classroom: 27 of them — or roughly 2% of the tenured faculty of 1,163.

The pipeline looks only slightly better. Of the more than 1,300 professors on the tenure track at the region’s colleges and universities, 68 are Black (5%), according to the federal data.

Some schools define tenure differently. For instance, Robert Morris spokesman Jonathan Potts said the school doesn’t use the term internally and instead has a system where full-time faculty can be awarded “non-probationary” status. He noted that the federal data does not count tenured faculty if they are also academic administrators. With that in mind, the university has 7 total Black faculty with non-probationary status.

Professors who have tenure or are on track to gaining tenure have more job stability and can speak up and pursue research without fear of retribution for their views and their lines of inquiry.  And who receives these coveted positions matters. Students see a white-dominated field. Do they feel welcome? Will lack of representation stem their ambitions?

The lack of diversity among college faculties has been at the center of national conversation after trustees at the University of North Carolina at Chapel Hill denied tenure for Nikole Hannah-Jones, a Black woman journalist and creator of the 1619 project, a New York Times series focused on slavery. Trustees granted the Pulitzer Prize winner tenure after public outcry, but she declined the position and will instead teach at Howard University, a historically Black university.

Had she taken the North Carolina job, she said she would have been just the second tenured Black woman professor in the 70-year history of the UNC journalism school.

On a national level, the percentage of undergraduate students of color went from 29.6% to 45.2% from 1996 to 2016. Faculty ranks remain largely white, and improving diversity is among the demands from students calling on their schools to do more to fight racism in the wake of George Floyd's murder. The question still rings in the air: What has changed on college campuses?

Pitt tracks faculty representation both through the federal system as well as an “internal tracking” that allows people to self-identify. The university acknowledged it needs to improve.

“The University of Pittsburgh remains dedicated to improving internal practices, structures and attitudes in pursuit of a truly more equitable and just Pitt. This is a comprehensive and crosscutting effort, requiring action from all areas of the University,” university spokesman Kevin Zwick wrote in an email statement.

Other colleges are partnering with organizations to help improve recruitment and retention as well.

Saint Vincent College is working with organizations like Allegheny Conference on Community Development “to attract and retain an increasingly diverse group of students, faculty and administrators in all areas of our college community,” spokesman Mike Hustava said in an email.

The tenure review process is complicated. Colleges require annual evaluations to look into areas like teaching or research, reviews by committees and years-long commitment to the university. But some experts are concerned that the traditional process is flawed.

Potts from Robert Morris said the university has many efforts to recruit more diverse faculty. For example, a committee was created to focus on diversity and inclusion as well as a Center for Equity and Professional Advancement. Last December, the university partnered with an organization called Vibrant Pittsburgh to increase the diversity in candidates, and the university has offered financial assistance to Black staff members who are interested in a doctoral degree to help them become faculty.

Kimberly Griffin, professor and associate dean at the University of Maryland, has researched how academic institutions can increase support for Black professors. Universities must reconsider the types of labor rewarded with tenure, she said, and go beyond providing scholars with just training and resources.

“What is really necessary in this moment is a critical look at how institutions do their work,” she said. “How are programs and policies set up in a way that miss the talents, the skills, the gifts of scholars of color?”

Universities are analyzing why the numbers are so low. At Duquesne University, only 8 of 279 tenured professors were Black, according to the 2019 survey.

Since joining Duquesne as provost three years ago, David Dausey said he and other administrators and professors who consult with him have reviewed the statistics and worked to change hiring practices, review the handbook and train members of hiring committees on the importance of diverse candidates.

But he acknowledged the work is not easy. Along with addressing the COVID-19 pandemic that has slowed down some of the diversity, equity and inclusion initiatives, Duquesne must examine the traditional pathways of success within post-secondary education, he said.

“I think one of the challenges, moving ahead, is to ensure that the standards for excellence that are being used are ones that not only are the appropriate standards of excellence for what you're looking for — but also are ones that are not limiting, especially for diverse candidates,” he said.

Carnegie Mellon reported having nine Black professors out of a total tenured faculty of 447. But the university said it is hopeful for an increase based on the number of Black professors currently on tenure track.

“Carnegie Mellon values having a diverse community and in particular continues to improve its processes for hiring a diverse faculty body. We are encouraged by the growth in our number of black tenure-track faculty, which has grown from 9 in 2015 to 19 in 2020, more than 100% growth,” spokeswoman Shilpa Bakre wrote in an emailed statement.

The Community College of Allegheny County has the highest percentage of Black tenured professors — 10% — in the region. (Photo by Ryan Loew/PublicSource)

Griffin argues that Black faculty and others from marginalized backgrounds validate students' identities and serve as mentors, though she notes that white faculty must also do more to support students of color. Outside of teaching, a lack of diversity could mean universities miss out on work and research.

“Any time that we have folks with different perspectives and different worldviews engaging in the research enterprise, we're going to come up with new insights, new innovations, new applications,” she said.

Stuart Blacklaw, provost of the Community College of Allegheny County [CCAC], said colleges have to make the intentional decision to diversify faculty.

The work done to increase representation at CCAC has been ongoing, even before he became provost in 2015, Blacklaw said.

With a committee focused on diversity and inclusion efforts, Blacklaw explained that the college reviewed its own hiring policies and practices. The college posts faculty job positions in national publications that have a diverse audience. The search committees are diverse and receive trainings on what to look for and allow each member to speak up and discuss potential hires, Blacklaw said.