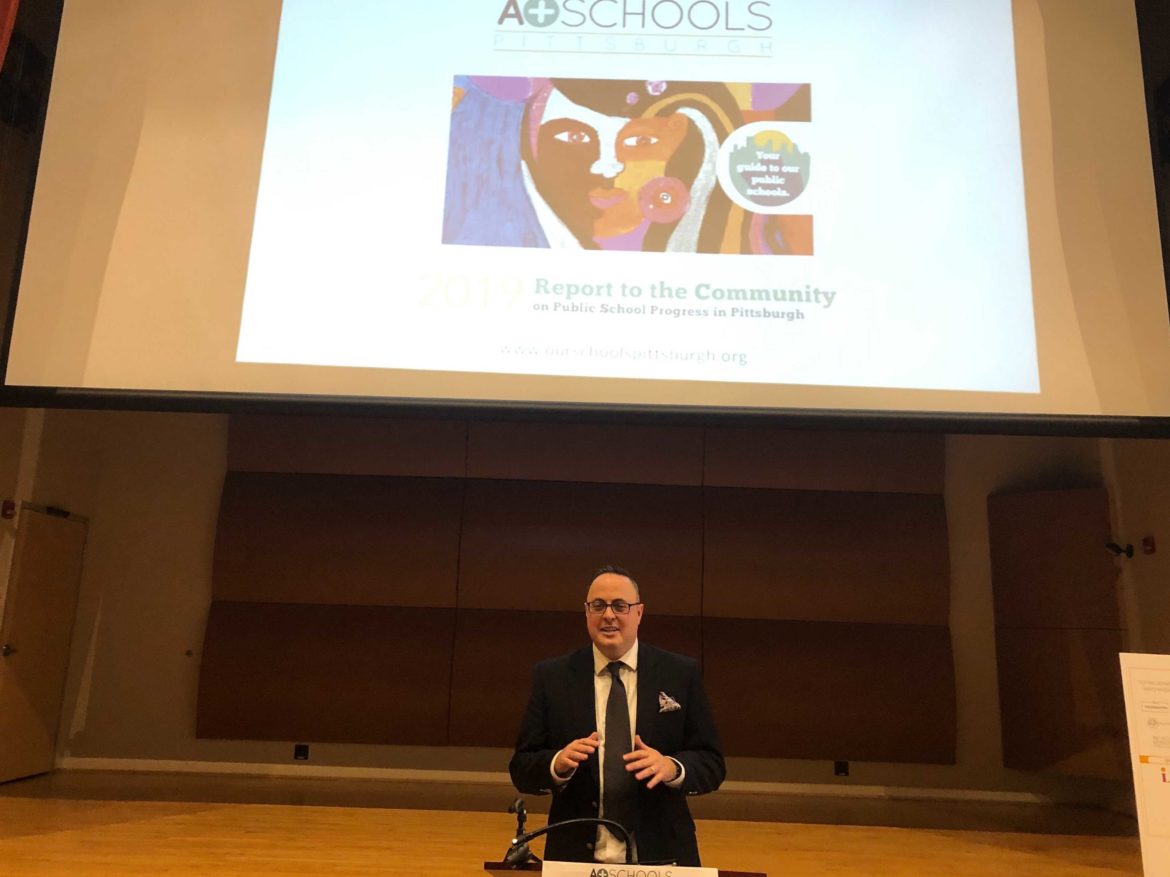 And while those trends are outlined in the statistics of A+ Schools 125-page report to the community released Monday morning, the major focus of Executive Director James Fogarty’s presentation was on schools that are making progress in reversing the negative trends.

“I could stand here year after year and tell you that Pittsburgh Public Schools fails to educate Black children,” Fogarty said after his presentation at the Kaufmann Center in the Hill District. “But instead we wanted to show examples of schools that are turning things around.”

According to the report, chronic absenteeism can hurt a third grader’s ability to read, cause sixth graders to fail classes and increase the likelihood that ninth graders will  eventually drop out.

Schiller took several steps to reduce absenteeism. Those include hiring counselor Lana Shaftic to work with students and parents, partnering with the United Way of Southwestern Pennsylvania’s “Be There” attendance program and assigning an adult buddy to each student with an attendance problem.

Fogarty said Schiller staff members have worked hard to break down barriers students face in getting to school, including sending an Uber for a student who missed the bus.

Fogarty said it’s his hope that other schools in the district can learn from Schiller to help alleviate the district’s persistent problem with chronic absenteeism.

Some of the numbers are alarming, particularly at the secondary level. Among the 9-12 high schools, 76% of the students at Pittsburgh Perry 9-12 were chronically absent. Among the 6-12 schools, Milliones saw 54% of its students miss 10% or more of the school year. That figure was 56% at Westinghouse.

The rates of absenteeism were not as high in the lower grades. But there were pockets of high absenteeism at some elementary schools.

Among K-8 schools, Pittsburgh Arlington had the highest chronic absenteeism rate at 49%, followed by Pittsburgh King at 45% and Morrow at 39%.

In some instances, the high absenteeism correlated with low third-grade reading scores. At Arlington, just 13% of Black third graders scored proficient or advanced on the Pennsylvania System of School Assessment exams [PSSA] and at Miller and Weil, the percentages were 16% and 19%, respectively. There was no white subgroup at those schools because the population was too small.

Third-grade reading proficiency is identified as an important educational milestone because, after third grade, students need to read in order to learn concepts in all subjects.

Among the elementary charter schools, the highest chronic absenteeism rate was 49% at Propel Hazelwood, where third-grade reading proficiency among Black students was at 11%. There was no white subgroup.

Pittsburgh CAPA 6-12 had a graduation rate of 98% but its demographics are not reflective of the district-wide percentages. CAPA reports 30% of students as economically disadvantaged and 63% are white.

Among the reasons listed for City Charter’s success is its practice of “looping,” which keeps students with the same teachers for all four years and allows them to develop more steady relationships.

Pittsburgh Dilworth PreK-5 was lauded in the report for its third-grade reading proficiency rates for Black students on PSSA exams. They exceeded the Pittsburgh district’s overall average. At Dilworth, 58% of Black third graders scored proficient or advanced — seven percentage points above the district average and 20 percentage points above the district-wide average for Black students.

“So it’s not just a Pittsburgh challenge. It’s a national challenge.”

Fogarty and school officials credit the success to the implementation of culturally responsive teaching strategies and efforts by staff to work together on issues of racial bias and student achievement.

Across the school board, large racial disparity gaps remain between Black and white students at all levels and all subjects. PublicSource reported on the disparities in a September story when the district reported its 2018-19 state test results.

Enrollment in the district’s gifted program is still overwhelmingly white. In the 2018-19 school year, 18% of students in the program were Black, though Black students make up 53% of district enrollment.

White students make up 31% of district enrollment but 66% of enrollment in gifted programs.

“These percentages have remained almost the same compared to 2017-18,” the report stated.

Last fall, the district initiated a pilot program that expanded and changed the screening process at Arlington PreK-8, Arsenal PreK-5, Banksville K-5, Brookline PreK-8, Langley K-8 and Mifflin PreK-8. Results on how that new system is eliminating bias in the selection process is not yet available.

Comparisons with other cities

Fogarty reported that Pittsburgh compares well with other similar city school systems in Philadelphia, Cincinnati, Cleveland, Milwaukee, Indianapolis and Baltimore. He said the cities were chosen because they have a similar racial and economic make-up as Pittsburgh, though Philadelphia is considerably larger.

Minika Jenkins, chief academic officer for Pittsburgh Public Schools, said she appreciated the comparison the report showed with other cities because it showed other districts struggle with the same problems as Pittsburgh.

“So it’s not just a Pittsburgh challenge,” Jenkins said. “It’s a national challenge.”

She referenced a plan the district announced last week to bring more equity to Pittsburgh schools through professional development; creation of culturally responsive material and practices to trauma and violence; and a review of curriculum to ensure all students have access to rigorous coursework.

Jenkins said she was also pleased to see the focus in the report on Pittsburgh schools that are making progress.

She said district officials now need to figure out “how can we replicate that across the district.”

The full A+ Schools report, with school by school data, can be found at  ourschoolspittsburgh.org.