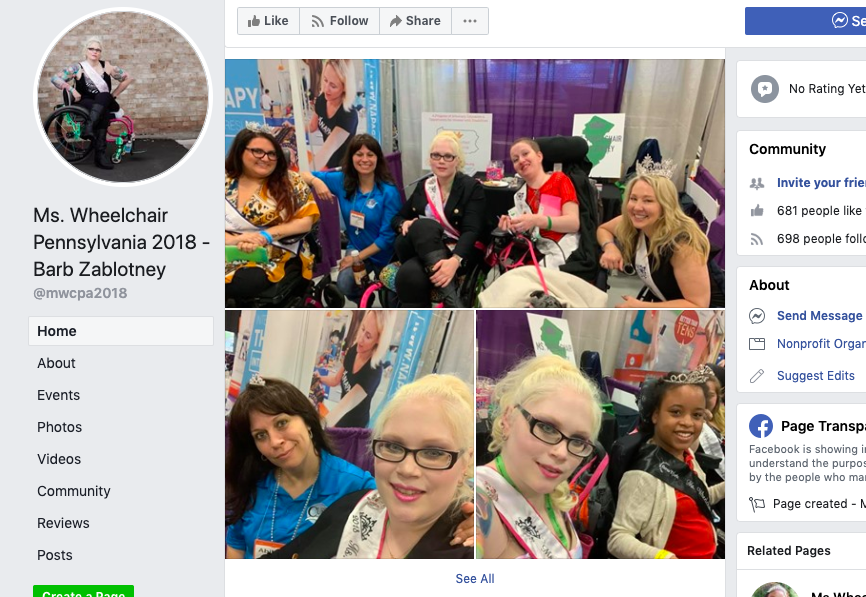 A screenshot of a Facebook page for Barb Zablotney, Ms. Wheelchair Pennsylvania 2018.

Barb Zablotney’s decade-long odyssey after an accident left her paralyzed took her from the depths of depression to leading an active public life.

Like more and more Americans, she chronicles parts of her life on social media — something that the Social Security Administration has indicated it could begin reviewing as part of the vetting process when people apply for disability benefits.

“If it’s to weed out the people who genuinely are ruining the system and abusing it, then that is important,” said Zablotney, the 2018 Ms. Wheelchair Pennsylvania who also holds leadership roles at several advocacy organizations. “But it’s also important for people with disabilities to get out in their community and do as much as they can, whatever they can.

“Just because they’re disabled doesn’t mean they can’t do things.”

The Social Security Administration can currently review a person’s social media presence as part of fraud investigations that include information from social media to corroborate findings. But under the Trump administration, the agency has studied whether to expand its use of social media as part of the disability claims process. Some attorneys and people who advocate for those living with disabilities worry that the way a person appears on websites like Facebook, Twitter and Instagram could lead to unfairly limiting or denying benefits — and may further slow the process.

Social Security studied strategies of other agencies and private entities to determine how social media could be used to evaluate disability applications, according to Darren Lutz, public affairs specialist at the Social Security Administration.

“Social Security does not currently pursue social media in disability determinations,” Lutz wrote in an email, adding the agency doesn’t “have detailed information to provide at this time” about whether it will pursue expanding its use of social media.

Social media reviews, if adopted by the agency, could be part of a much broader effort to “decrease overpayments, meet current business practices in collecting remittances, and identify suspicious patterns of fraud,” according to the agency’s 2019 Congressional Budget Justification.

The issue comes at a time when Republicans and Democrats continue to clash over how to fund entitlement programs like Social Security, Medicare and Medicaid.

As social media becomes more ubiquitous it could be a matter of time before a person’s public profile is viewed as part of their persona — whether the poster considers it fair or not.

Beyond possible use by the federal government, private companies may already look at a person’s public social media presence if checking on the applicant, said law professor Sharona Hoffman of Case Western Reserve University in Ohio. Landlords often do the same.

“If it has accessibility to the public, then anyone can use it, including people who do not have your best interest at heart,” she said.

“They’re understaffed,” said DeGori, an attorney at Robert Peirce & Associates, P.C. “They don’t have people to read these files as efficiently as they should.”

Rejected claims often trigger an appeal, and nationwide, there's a longstanding backlog. The agency is working to reduce how long it takes to process those appeals — from the time a person files a hearing request until a decision is mailed — to 270 days, or about nine months.

The average wait time for a hearing in Pittsburgh as of March was 18.5 months, according to the agency.

About 720,000 people nationwide were awaiting a hearing decision as of March, the agency said.

“People put on social media that they have a great life. Mine looks very happy, but I’m not taking pictures showing me laid up in bed..."

About 36 percent of disability claims are approved on the first try, according to Social Security. Those whose claims are denied can then request a reconsideration of the decision.

If their claim is denied again they may appeal, which triggers a court hearing before an administrative law judge. If still denied, they can request an Appeals Council Review and, ultimately, file suit in federal court.

DeGori said she’s had clients with a terminal illness be denied benefits after the initial application was filed.

“I have had clients who have passed away while waiting for their (appeal) hearing,” DeGori said. “That happens, unfortunately. They overlook a lot of the evidence.”

Sue Kerr, a 48-year-old living in Pittsburgh’s Manchester neighborhood, said the effect of social media monitoring on people with disabilities would be “an effective way to re-institutionalize us in our own homes.”

“Do you have any rules or obligations on social media to report an accurate and robust report of your activities? No,” said Kerr, who says she receives federal disability for social anxiety and other mental health issues. “If someone looked at your last three years, it wouldn’t capture everything. Everyone uses social media for different purposes and there’s no requirement to have a caveat for everything.”

Alyssa Cypher, executive director of the mental health organization Inside Our Minds, pointed out that people who live with chronic illness can have good days and bad days — something they don’t always reflect on social media.

“How many ‘happy’ posts would a person who is experiencing depression be able to make to not affect their claim outcome?” Cypher wrote in an email. She says she does not receive federal benefits. “If a disabled person engages in regular activism to protect their rights and voice their concerns, would this ‘prove’ they are able to work?”

Zablotney was studying to be a veterinarian technician when her car hit a patch of ice in December 2007 and she suffered a permanent injury. She then endured other personal traumas: Her mother died, she gained 100 pounds, and she became so depressed she didn’t want to get out of bed.

But she pulled herself up — gradually losing the weight and finding a new role as an advocate and leader.

“People put on social media that they have a great life. Mine looks very happy, but I’m not taking pictures showing me laid up in bed or my bathroom accidents, so it’s not 100 percent fair to judge people based on their social media presence,” Zablotney said. “We’re not hermits. We go out and live our lives, and if not, we battle with depression.”

She’s mindful of the fact that her disability is visible because she cannot walk and uses a wheelchair, so there’s no question about her condition.

“I’m not going to magically stand up, but I know that’s not the scenario for everyone,” Zablotney said of the way some disabilities may or may not be apparent.

But people, in general, should be mindful of the image they’re casting with comments and images as part of a public persona, Hoffman said.

“A major point is that our lives are more public,” she said. “If you Google me, I’m horrified what you can find out about me. Half of it is wrong. People who are on social media are sort of doing it themselves, too, because they are advertising things about themselves.

“People need to think very carefully about what they post.”

Kimberly Palmiero is a Pittsburgh-based journalist and a senior editor at iGeneration Youth. She also serves on the board of the Press Club of Western Pennsylvania. Reach her through her website.