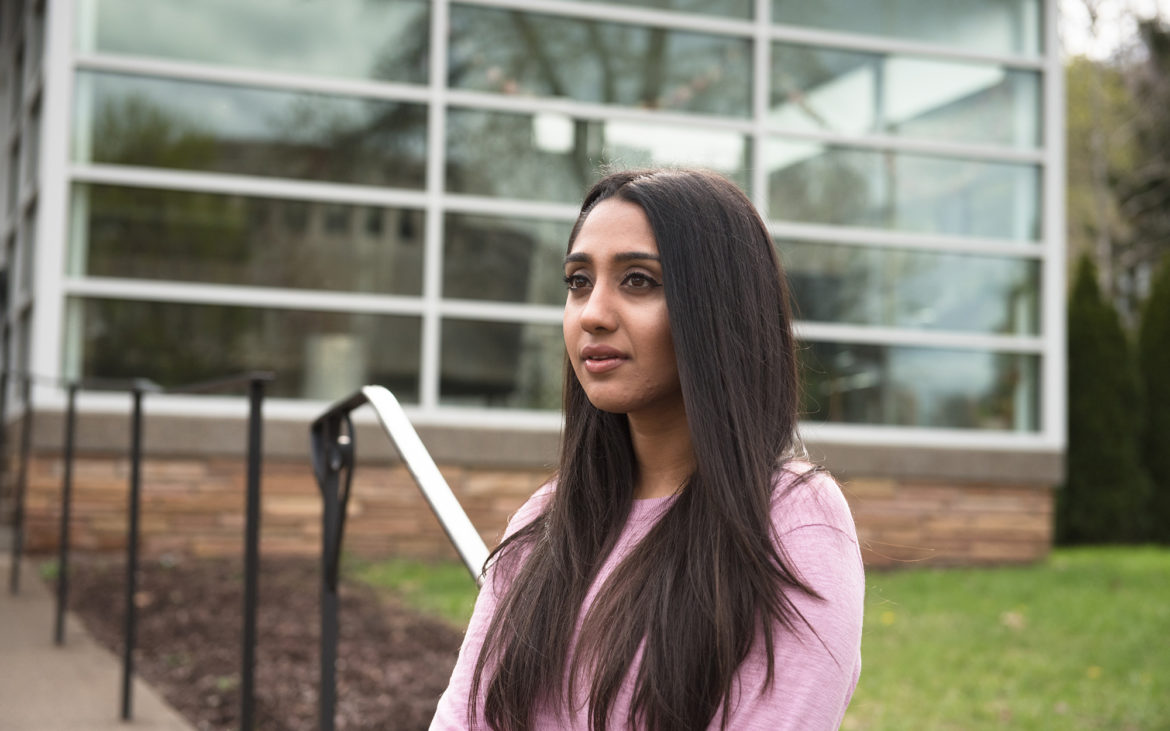 Amber Chaudhry, a graduate student at the University of Pittsburgh, shares about her life and the 'network of empowered Muslim women' she knows. Here, she is pictured in the Islamic Center of Pittsburgh in Oakland. (Photo by Sarah Collins/PublicSource)

It was the winter of 1998. I was 6. I don’t have a particularly vivid memory of that year but I can remember one morning of the first grade exceptionally well. I had stepped off the school bus and trotted into school, my mind filled with memories from the day before, like my mom’s warm smile as she chided me to move away from the furniture with my henna-soaked hands.

It was the morning after the Muslim celebration of the end of Ramadan — Eid-al-Fitr. I rushed into my classroom waving my tiny palms at my friends. Some of them stared with interest and others recoiled. “Ewwww, Amber drew all over her hand with marker.”

The next day I was dragging my feet to school, avoiding eye contact with friends on the way to my desk, still sensitive and weary from the day before. Unexpectedly, my teacher ushered me to the front of the classroom and had me sit in a chair. She told me she had a special role for me in today’s class. She proceeded with a smile and called the rest of my classmates around my chair. She pulled out a tube of henna and asked me to draw a design on her hand. She asked the other girls in class to come up and take turns having henna painted onto their hands. Pretty soon, girls started pushing past one another to have our teacher draw a butterfly or puppy on their own palms. We all ended the day smiling, as my friends asked me what designs we would paint on our palms next Eid.

I know this is not the typical response. Certainly, in part because of my education and my background, I have had a lot of trouble grasping the premise of the question that pundits, editorialists and scholars are constantly scrambling to answer: “Does practicing Islam mesh with the values of Western society?” Particularly in terms of its treatment of women, though my perspective may be variant from a sister of mine who is a hijabi, as I am not visibly Muslim. From that day in first grade, I have always perceived my religion and my culture to be one of my driving strengths and the fellowship of women around me to be a force of support and inspiration. Amber Chaudhry talks to a friend in the library of the Islamic Center of Pittsburgh. She said she draws upon these friendships for strength in trying times, like when President Donald Trump proposed a travel ban. (Photo by Sarah Collins/PublicSource)

As a Muslim within my family, community and mosque, I was encouraged to act in the spirit of our religion to be kind. To excel in performing good works in my local community, to be an advocate and an educator. In my Islamic School, I was taught the values of charity by many “Aunties,” our elders in the immigrant Muslim community. These Aunties volunteered their Sundays to wrangle dozens of us children on a sugar high with a mission to teach us the positive values of altruism and charity, while embodying those principles within themselves. As an Ellis girl (a student at the all-girls private PreK-12 Ellis School), I was consistently encouraged to do the same. I grew up seeing the perfect harmony of two communities of women work to reassert the value of my contributions as a leader. I tried to do exactly that, as a student and young professional in Pittsburgh.

You can see that fastidious commitment to the betterment of the Pittsburgh community at my local mosque — the Islamic Center of Pittsburgh. I have a distinct memory of looking up to see a Pakistani Muslim friend that I had grown up with hurriedly carrying papers into the back office rooms. She later told me that she worked as the office manager at the mosque, and, in fact, she was running to a mosque board meeting where eight of the nine members were women at the time.

As I started spending more time at the mosque and affiliated events, I began connecting more and more with the network of empowered Muslim women. I began tutoring a Moroccan immigrant, a sister who was working on her Master’s in Nursing while raising her young children and working as a teacher at the Islamic School every Sunday. I came upon a friend, a child of Syrian immigrants, who was looking for assistance in sorting and bagging thousands of donations that had poured into the mosque for Syrian refugees. I learned that a group of women, varying in skin tone and background, had been volunteering for entire days at a time. They set me to work. The values that I see embedded in the women around me are imparted unto us by our immigrant parents who worked tirelessly to raise and foster the highest-quality children and community they could. They volunteered time outside of their busy schedules constantly to teach goodness, peace, empathy and charity — principles of Islam to every individual and space around them. They succeeded.

In the time that I’ve spent at Pitt, I’ve witnessed so many demonstrations of Muslim Girl excellence — friends who work to bring the greater Pittsburgh community together. Within my own program at the University of Pittsburgh Graduate School of Public Health, I’ve seen a swell of young Muslim women moving forward in researching health equity, infectious disease and community health. I’ve seen my sisters take leadership positions in professional and educational capacities all around the Pittsburgh region.

It would be impossible to begin to name the myriad of Muslim women around me, in the Oakland and Shadyside area alone, who inspire me but, in writing for this piece, I began to ask some of the girls in the Muslim Student Association what their aspirations and hobbies are. The list is amazing: Playing the violin, organizing to support Planned Parenthood, studio art and 3D printing, contributing in areas of biomedical engineering and health sciences, equitable public and health policy. They wanted to develop culinary talents, babysit and sketch comics following the heroism of Muslim women.

"...I have always perceived my religion and my culture to be one of my driving strengths and the fellowship of women around me to be a force of support and inspiration."

I cannot deny that since the night of the election, there have been long periods of time where my spirit has been diminished. I have felt thwarted, defeated and upset with the mounting offenses being committed against my fellow Americans by the current administration. The peak of my despondency came the week after the proposed ‘Muslim ban.’ I had attended a rally and became frustrated with the lack of progress from my long-term activism. I was perusing my Facebook feed before bed when a message popped up on my screen. It was from a friend from Ellis, a white, female ally. She had messaged me saying: “Why don’t we host an alumna Muslim ally training event with a suggested donation to the Islamic Center of Pittsburgh, and let’s host it on the International Day of Women?”

My perspective may be an idealistic one, but it came as no surprise to me that, when I was feeling worst, the fellowship of Pittsburgh women would be what lifted me back up.

Amber Chaudhry is a graduate student at the University of Pittsburgh Graduate School of Public Health. She is a member of the Islamic Center of Pittsburgh and an Ellis School alumna.

One thought on “Trump’s actions and rhetoric threatened to crush my spirit, but Muslim Girl excellence in Pittsburgh persists”