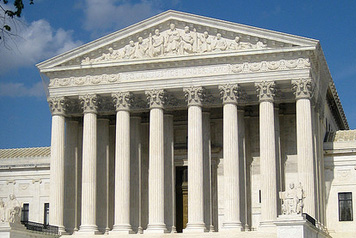 The Americans with Disabilities Act extends protections to people with disabilities in schools and workplaces. This week, U.S. Supreme Court justices were asked to determine how the law applies in dangerous situations.

Are police officers required to act differently when a disabled or mentally ill person is armed and violent?

According to an Associated Press story:

The justices heard arguments [Monday] in a dispute over how San Francisco police in 2008 dealt with a woman with schizophrenia who had threatened to kill her social worker. Police ultimately forced their way into Teresa Sheehan's room at a group home, then shot her after she came at them with a knife.

Sheehan survived and later sued the city, claiming police had a duty under the Americans with Disabilities Act to consider her mental illness and take more steps to avoid a violent confrontation.

Mental health advocates say that when police know someone has a history of mental illness, they should go into the situation with less aggressive tactics, and that there have been unnecessary shootings because police are not trained in those approaches.

But split-second decisions are part of the job in law enforcement. The AP reported that several justices and law enforcement groups shared concerns that asking police officers to hesitate and “second-guess” themselves could put officers and the public at risk.

A federal district court has already ruled along the same lines, calling it “unreasonable” to put ADA compliance above the safety of officers and bystanders. The ruling was kicked back by an appeals court.

Supreme Court Justice Antonin Scalia gave signs that he might want to punt the case as well. Scalia took issue with the city of San Francisco changing its policy on how the ADA applies in these situations.

The AP reported that San Francisco first said the ADA did not apply in police encounters; later, after the Supreme Court accepted the case, the city said it applied but not when a person poses a “direct threat.”

The Obama administration tried to stake out a middle ground. Deputy Solicitor General Ian Gershengorn told the justices that when a mentally ill person is armed and violent, police should only change tactics if the person is "contained and visible."

"I think the standard you've just proposed gives no guidance at all to an officer faced with a violent person," Kennedy said.