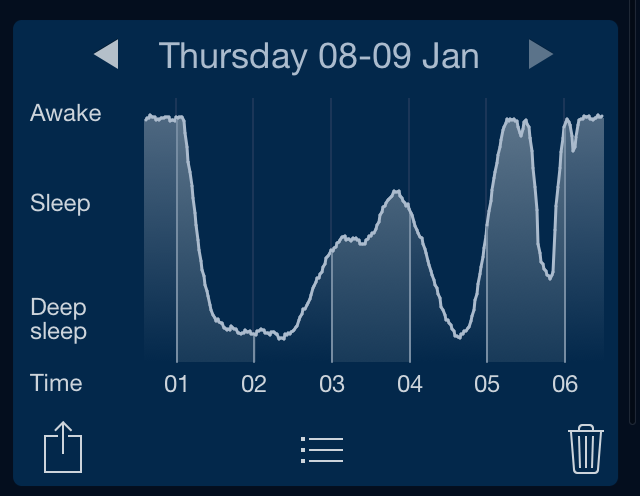 A friend convinced me to download a sleep app recently. I usually don’t use self-help apps. Systems that claim to help you lose weight or organize your closet seem, like their paperback equivalents, embarrassing to be seen using.

So the first night I set my new Sleep Cycle Alarm Clock app, I expected little more than a sense of self loathing in the morning. What I got was the best night’s sleep I’ve had in months.

I quickly became consumed with this app, discovering its functions, options, buttons, and capabilities. I can wirelessly sync it to my fancy Philips Hue light system (if I had one) to slowly turn my lights on as I wake. I could hook it up to my (imaginary) AirPlay speaker system to bring a richer sound.

In addition to optionally syncing to fancy Millennial life-organizers, I realized that Sleep Cycle was collecting a lot of data, data about me. Sleep Cycle knew more about my sleep than I did. And it kind of freaked me out.

Sleep Cycle isn’t the only app of its kind. Every week, hundreds of millions of us go to the app stores on our phones and swipe through a barrage of glowing, round-cornered apps. Maybe you’re all about gaming, or shopping, or music, or health. Or maybe your interests lie a little south of normal.

No matter what you’re after, there’s an app for it. And many of those apps are collecting information on you.

Now don’t get me wrong, I embrace the proliferation of data, especially when it’s put into the hands of the people its collected from, or used by journalists, like those at PublicSource. But some questions must be asked about these apps: What data are they collecting on us. And  what do they do with it and do they let us know?

So let’s continue to use the Sleep Cycle example. Reading descriptions, “how-it-works” pages and FAQs, it becomes clear that Sleep Cycle gathers a lot of data about you.

As for what they do with this data, well, that is less clear. On their website, I found a variety of articles published by Northcube, the developer and owner of Sleep Cycle, showing they use this data to track trends about sleep and sleepers. They also use the data to update and improve the app.

But are they using everyone’s data for these purposes? What if I just want to use the app and not have my data collected and processed? By simply using this app is my sleep being monitored?

“This Privacy Policy relates to our use of any personally identifiable data (”Personal Data”) collected from you when using the SleepSecure and/or Sleep Research features within Sleep Cycle Alarm Clock.”

So this policy only applies when I use those two features? What about when I just use the plain Jane app? Should I assume that they are not collecting information about me?

Maybe I can assume that they aren’t collecting personal data from me if I don’t opt to use the features. Personal data is information that identifies me as Alexandra Kanik, a 27-year-old woman who sleeps pretty well but not great, who generally falls asleep between midnight and one a.m., and who might drink a bit too much on Fridays nights.

But what about the impersonal metadata? Metadata is information collected about a person that does not identify him or her as an individual. So it’s all the same information, but without my name.

Jacob Appelbaum, a computer security expert, speaks eloquently about the importance of metadata in the recent movie Citizenfour, a documentary about Edward Snowden. If metadata is being collected from many apps, it takes only one personal link back to you for it to identify you, or who you might be.

Who cares, right? You’re not doing anything wrong. You’re just trying to get a good nights’ sleep.

A crime is committed

But let’s say there was a crime in your neighborhood. Perhaps a gas station was robbed. There is surveillance tape that shows someone of your approximate height and weight pointing a gun at the clerk and leaving the store with a bag full of cash.

Now, metadata could connect you to this crime: You live in the area, you own a gun of the type used at the scene, your height, weight and features match those of the suspect — and your Sleep Cycle data says that you woke about 45 minutes prior to the crime.

But this is all circumstantial, right? You’ve watched “Law and Order,” you know that isn’t enough to convict a person. I mean, how would the cops even point to you as a suspect in the first place?

All it would take would be one connection to you — an eyewitness who says it was you, a fingerprint, a DNA sample, anything that identifies you — and with that other metadata could be opened up, rifled through and used against you.

Because that’s what many trials are about, collecting metadata about a person to create a story, and to convince a jury that the story you’ve created is true.

If you’ve been listening to the Serial podcast for the last few months you know what I’m talking about.

What should you do?

So what does this mean? Should we delete all our apps, erase all our emails, send our smart phones flying off the Birmingham Bridge? No. I mean, probably not.

What we should do is be more aware of what data is being collected about us and by whom.

The next time you download that awesome carb-tracking app that your friend Chelsea told you about, look into it first. See who created it, read their privacy policies (yes, scroll alllllllllll the way down) and see what kind of research they’re releasing.

I did contact Northcube’s press person regarding their privacy policy and she assured me that no information was collected from users without their consent, meaning you’d have to agree to be part of the research or start using the SleepSecure feature.

But I downloaded and used the Sleep Cycle app for weeks without asking questions about my privacy. And it took a couple of emails to actually get the information I needed.

We are lucky to live in a world with so many technological wonders. But we must not ignore the responsibility that comes with them — whether you’re the user or the collector.