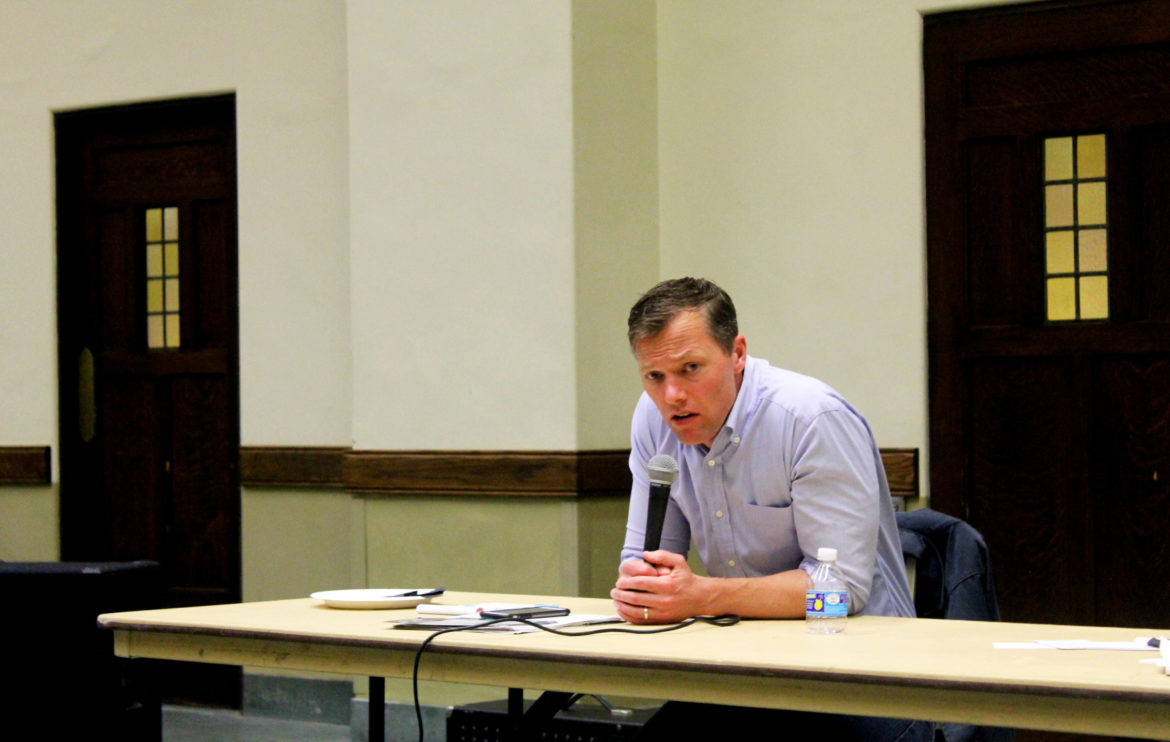 In Allegheny County, only 30 to 45 affordable rental units exist for every 100 low-income families. It is a housing deficit that perpetuates the cycle of poverty in the Pittsburgh region.

Today, Matthew Desmond — Harvard sociologist and author of Evicted: Poverty and Profit in the American City — spoke at the East Liberty Presbyterian Church to a room full of landlords, tenants, magistrates, housing policy experts and lawyers to discuss potential solutions to the shortage of affordable housing.

Without affordable housing, many low-income families can end up homeless, in shelters or in cramped quarters.

“We are systematically denying public housing to arguably the people who need it most,” Desmond said.

The lack of affordable housing is widespread in Pennsylvania. According to the Housing Alliance of Pennsylvania, the state is short 280,801 affordable rental units.

The scarcity of affordable units has much to do with landlords who are not willing to take on the risk associated with accepting housing vouchers, leaving thousands of families with nowhere to live.

The purpose of the Housing Choice Voucher Program, known as “Section 8,” is to lift low-income families and people with disabilities out of poverty.

Once a voucher is issued, it identifies the size of unit the family qualifies for, as well as the maximum amount of monthly rent the family can afford to pay, according to the Housing Authority’s site. It is the individual’s responsibility to find suitable housing with the sum allotted.

Ronell Guy, executive director of the Northside Coalition for Fair Housing, spoke to the pitfalls of this voucher system in Pittsburgh.

“Vouchers don’t work,” Guy said. “Why don’t we create a new program? We still have issues of stigma around Section 8 and racism.”

According to Guy, many residents in Pittsburgh who are issued vouchers cannot find affordable properties within the 120-day timeframe. As a result, the Housing Authority takes that money back, she said.

Desmond summed up this phenomenon as a low takeup rate, calling it a “weird, embarrassing housing problem” where landlords don’t want to accept tenants using vouchers.

A member of the audience told Desmond that the rate of returned vouchers in Pittsburgh is likely close to 50 percent.

“We have to ask hard questions about, should landlords be able to turn away people with vouchers?” said Desmond.

According to the Pittsburgh Post-Gazette, vouchers are an underutilized resource in the city:

In 2013, the Housing Authority of the City of Pittsburgh received $41.9 million in voucher funding from the federal government but spent only $29.8 million of that on voucher payments, serving about 5,000 families, the study noted. The full use of that funding could have served an additional 1,500 to 2,000 households.

If you’re a landlord, there may be a good reason you don’t accept vouchers, Desmond said, to a room full of nods.

A member of the audience noted that vouchers are set at a certain amount of rent. That price may only cover the mortgage a landlord pays each month, not beginning to cover the expenses for rental unit improvements to meet federal safety requirements.

This leads to a lack of appropriate units for voucher holders. Landlords can’t afford to accept these tenants and may lose money if they do.

Some landlords in the audience noted that the government should consider increasing the value of these vouchers.

The real question, though, according to Tillman, is, “How can we make Section 8 more attractive?”

“There are a lot of landlords that would probably want to participate if they understood that a lot of the myths are not supported by data,” Guy said.

Desmond responded that it’s time to “rest those stigmas and explode those stereotypes” to get landlords to accept more Section 8 vouchers.

“We need to stop being content with Band-Aid fixes,” he said.

The conversation was facilitated by the Housing Alliance of Pennsylvania, in collaboration with the Pittsburgh Foundation and Pittsburgh Arts and Lectures.