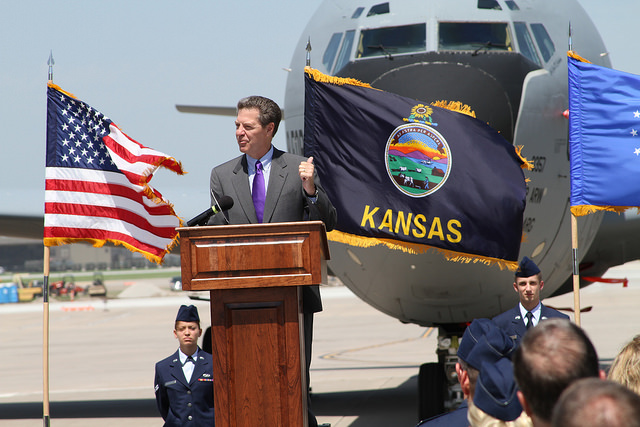 Two nonprofits that don’t disclose their donors are doing most of the advertising in the Kansas state governor’s race.

On one side is the Alliance for Freedom, which is backing Republican Gov. Sam Brownback, and on the other side is the Kansas Values Initiative, which has run attack ads against Brownback.

According to the story by The Center for Public Integrity:

Four years ago, the last time Brownback ran, no such groups purchased ads in the governor’s race in Kansas, and only $713,000 was spent on TV ads overall. This cycle, non-disclosing groups paid $3.3 million of the $6.3 million spent on ads run in the state so far. And Kansans have seen more ads for state-level elections produced by these secretive groups than voters in any other state.

This is in stark contrast to Pennsylvania where Gov. Tom Corbett and challenger Tom Wolf have bought most of their own TV ads.

All of this outside spending in Kansas was made possible by the 2010 Supreme Court decision on the Citizens United case, which allows outside groups to spend unlimited amounts of money on politics as long as that spending is not being coordinated with a candidate.

This election cycle, more than 65 percent of the ads by such [secretive] groups have been negative attacks on candidates for the top-of-the-ticket gubernatorial races [nationwide].

Since some of these secretive groups are brand new and may only exist for a short period of time, it is hard for regulators to keep track of them.

Sometimes the groups can set up shop, air ads during an election then dissolve as soon as the polls close, without registering with the IRS or state agencies.