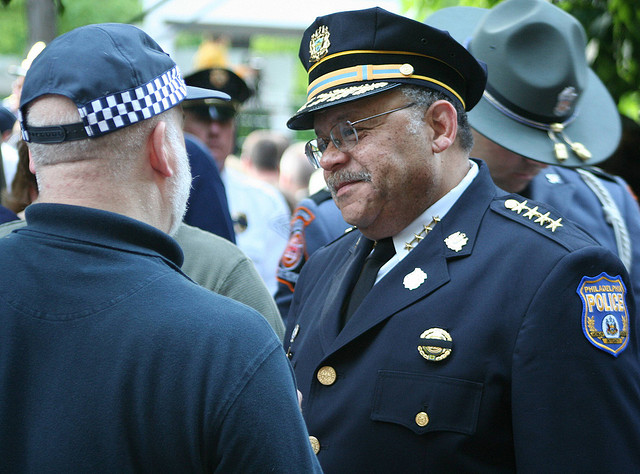 Charles Ramsey, Philadelphia’s newly retired police commissioner, has seen how much police have progressed in almost 50 years — and he has an idea of how far they have to go yet.

Early in his career, Ramsey said officers in Chicago would fight over integrated patrol cars – so called “salt-and-pepper” cars, as he told The Marshall Project recently. The fighting stopped once women were allowed in the field. None of the men wanted to pair up with the opposite sex.

Departments are more diverse now, he said, but not as much as they should be.

According to Philadelphia Magazine, more than half of the department’s officers are white, though the city itself is only 37 percent white (with more Philadelphia residents being black than any other ethnic group).

That’s a common problem. In Pittsburgh, for instance, the Bureau of Police (which hired only 14 black officers from 2001 through 2012) is 13 percent black. Black residents make up a quarter of the city’s population.

Ramsey was chair of President Obama’s Task Force on 21st Century Policing, which stressed the importance of diversity in modern police forces.

The task force was created after a string of controversial incidents that left young men like Michael Brown dead at the hands of police in Ferguson, Mo.

As a Chicago native, he’s watched upheaval in his former department after the shooting of teenager Laquan McDonald by police, and the subsequent lack of transparency.

Ramsey describes it as a clearly “bad” shooting.

As he told The Marshall Project:

It didn’t take long after watching the video to figure that out. But the problem was that it took a year for [the video] to come out, and that’s almost more controversial than the shooting itself. You know, bad news doesn’t improve with age.

Chicago’s police superintendent was fired in the scandal, and some have speculated that Ramsey would return home to run the department. He is instead working in private consulting.

As Philadelphia’s commissioner, Ramsey also invited the U.S. Justice Department to review police shootings after Philly.com reported a spike in shootings, even as assaults on officers decreased.

Police shootings are routinely controversial, not just for what happened, but for what the public is never told. (See our reporting on the lack of transparency in state police shooting investigations.)

Philadelphia Rep. Martina White championed a bill to keep the names of officers involved in shootings secret unless they are charged with a crime.

I feel very strongly that a police officer is a public servant…We don’t walk around with anonymity, but then when we shoot somebody, there’s an expectation that our names should not be released? I just don’t understand that logic.

While Ramsey has been applauded for improving public safety, he has also led the department through scandal, including the indictment of narcotics officers for alleged racketeering. After acquittal, they returned to work.

Now he’s heading to other departments, including in Wilmington, where he’s been hired as a consultant to help improve how the department works with the community.