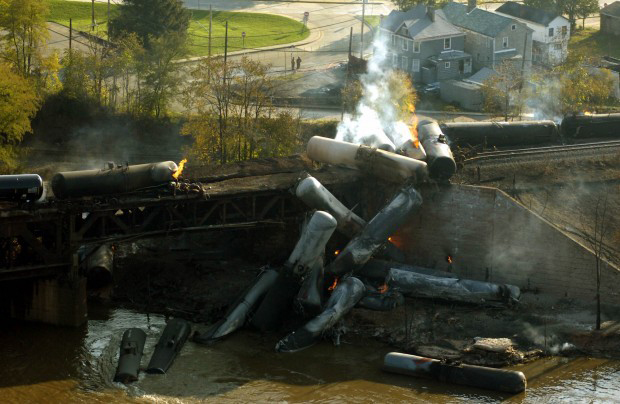 Walking with his daughter from a Friday night football game in New Brighton, Pa., Fire Chief Jeffrey Bolland heard what sounded like a jet overhead and saw an orange glow in the distance.

Twenty-three rail tank cars of ethanol derailed on a bridge above the Beaver River on that night in 2006, setting off an explosion that burned for 48 hours. Some of the black, torpedo-shaped cars tumbled into the river.

No one was injured, but 150 people were evacuated and a multi-million dollar cleanup ensued in the city about 30 miles Northwest of Pittsburgh.

The rail cars in the accident were DOT-111s, designed in the early 1960s and originally used to haul non-hazardous materials such as corn syrup. Now, they are the worker bees for the glut of crude oil and ethanol being transported across Pennsylvania and the country.

“The same old clunkers are still out there,” said Fred Millar, a Washington, D.C., consultant to the rail industry. “They’re pepsi cans on wheels.”

For more than 20 years, safety officials have warned about these cars as accidents involving them have multiplied. One of the worst was in Lac-Mégantic, Quebec, in July 2013, when 47 people died after a runaway train carrying Bakken crude oil from North Dakota exploded, decimating the town.

Now, state, federal and industry officials are demanding that regulations be put in place to improve the safety of the cars, which are “subject to damage and catastrophic loss of hazardous materials” when trains derail, according to the National Transportation Safety Board (NTSB).

After two recent derailments in Pennsylvania -- one in Westmoreland County, one in Philadelphia -- involving the cars and crude oil, U.S. Sen. Bob Casey, D-Pa., sent a letter to U.S. Secretary of Transportation Anthony Foxx.

“Steps must be taken to make rail cars safer and to ensure greater transparency in the transportation of hazardous materials,” Casey wrote.

The amount of crude oil spilled last year was more than the total amount spilled  in the 37 previous years, according to an analysis of federal data by McClatchy Newspapers.

“Most times, people don't want regulations, [but] in this case, everybody wants them,” said Anthony Hatch, a rail transportation analyst and consultant.

Pennsylvanians usually associate fracking with natural gas, but much of the crude oil being fracked in the North Dakota Bakken Shale formation goes to refineries in and around Philadelphia, which include Philadelphia Energy Solutions, the largest refiner of Bakken crude.

Railway officials don’t reveal their routes for hazardous materials for security reasons, and aren’t required to by law. However, a state official said Bakken crude does come through Pittsburgh on the way to Philly.

And the number of trains carrying crude oil through Pennsylvania are set to spike with the opening of a new crude oil terminal in Eddystone in Delaware County at the end of April. Trains carrying more than 80,000 barrels of North Dakota crude oil are expected to arrive daily.

Virtually no one in the rail and oil industries anticipated that railroads would be a primary mode of transporting the massive amounts of newly fracked crude oil in North America, said Hatch, the rail industry analyst.

“Nobody saw it coming,” he said.

Now, federal regulations need to play “catch up” with this reality, said Deborah A.P. Hersman, former chairwoman of the NTSB, in a statement.

“The large-scale shipment of crude oil by rail simply didn't exist 10 years ago,” she said.

Now the NTSB -- which investigates accidents, but doesn’t regulate railroads -- and others are insisting that regulations be written covering the DOT-111s and other rail cars.

"Right now, there is so much uncertainty that people aren't going to make investments in safer cars and they're going to keep running these crummy cars and killing people," said Rep. Peter DeFazio, D-Ore., at a U.S. House subcommittee hearing focused on rail safety in February.

The job of writing the regulations falls to the U.S. Department of Transportation’s Pipeline and Hazardous Materials Safety Administration (PHMSA).

In September, PHMSA put out a notice asking for comments from citizens, environmental and industry groups, and railroad companies on proposed rules to improve the design of the DOT-111 tank car, as well as other safety rules.

PHMSA officials said they’ve been busy since the comment period ended in December analyzing numerous comments on the rules. But changes aren’t pegged to come until early 2015, according to the agency’s timeline.

This month, a Senate panel grilled regulators on taking too long to pass regulations improving the tank cars used to haul crude.

The panel’s chairman, Sen. Richard Blumenthal, D-Conn., said he was "disappointed and disturbed by some of the delays and failures in rulemaking and scrutiny."

PHMSA head Cynthia L. Quarterman told the panel that her agency is working as fast as possible.

A PHMSA spokesman, Joe Delcambre, told PublicSource in an email that “it was crucial to get input from a wide variety of stakeholders, including shippers and carriers, state and local officials and concerned citizens.”

The AAR estimates there are 92,000 DOT-111 tank cars used to transport hazardous chemicals and that more than 75,000 of those would need to be retrofitted or possibly to be phased out. These tank cars are not usually owned by railroads but by chemical or oil producers and leasing agencies.

Simeone said that during the year or so it may take for federal rules to pass, state and local officials should do inspection blitzes of tank cars and rail lines carrying hazardous materials.

The Pennsylvania Public Utility Commission, which works with the Federal Railroad Administration (FRA) to inspect rail operations, is now focused on inspecting tracks and rail equipment that carries crude oil shipments, a spokeswoman wrote in an email.

Railroad officials seem to be willing to communicate information about their shipments to state officials.

The Pennsylvania Emergency Management Agency recently struck an agreement with CSX railroad to get real-time information on the tracking of hazardous material shipments, including crude oil, in the state.

“It will better prepare [state emergency workers] to respond to any incidents that may occur,” said Cory Angell, a spokesman with the agency, who added that his agency is also reaching out to the Norfolk Southern line for a similar agreement.

And officials at both major PA railroads have said they’ve helped train local emergency responders across the state.