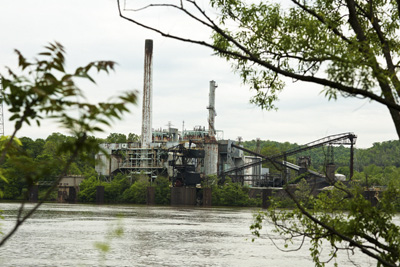 As Gov. Tom Corbett and legislators worked frantically to lure Shell Oil Co. to build a $3.2 billion ethylene processing plant in Western Pennsylvania, they forgot one of the players.

In the rush to create a larger tax-free zone for Shell, they failed to ask the local government to approve the local tax exemption and apply for the expansion, which is required by state law.

"We weren't part of the process," said Rebecca Matsco, one of Potter’s three township supervisors. “We have seen no paperwork, no language. We have not had transparency.”

As a result, Potter Township, a small town in Beaver County, may lose out on funding for services such as fire protection and a bigger police force that are necessary because of the plant.

And the township could, if it chose to, stop the process of bringing Shell to the state.

Potter Township, with a population of about 600, and an average per-capita income of $20,000, isn’t rich in resources.

Potter is already home to a Keystone Opportunity Zone (KOZ).  Located in economically hard-hit areas, these zones allow businesses moving into them to operate tax-free for 15 years. Businesses in the zones are exempt from paying state and local taxes, including property, sales and corporate income taxes.

But the township never asked for an expansion of its KOZ.

“If the KOZ is to go in there, the locals have to approve the zone’s creation,” said Philip Durgin, executive director of the Pennsylvania Legislative Budget and Finance Committee.

The township wasn’t consulted by the state, but it was visited by Shell officials.

"The only contact we had was Shell sending a consultant to talk to municipalities in the area,” Matsco said.

The plant promises to bring in some local tax revenue. Potter collects a  local services tax of $52 a year from all who live or work in the township, including those Shell will eventually employ.

That’s $20,800 each year from the 400 Shell workers the company is required to hire under the KOZ. The township also depends on a wage tax of .5 percent, collected from employed residents.

But this would boost revenues only if Shell hires a significant number of people living in Potter.

And  it’s not enough to make up for what Potter will lose, said Matsco. She is concerned about the township going up to 15 years without local business and property tax revenue from Shell, which would become the township's largest employer.

“We want to be welcoming to Shell," she added. "But we want to be wise about getting the township's needs met.”

One way to do that would be through the Local Economic Revitalization Tax Assistance (LERTA) program already operating in Potter. Local governments can give businesses up to 10 years of tax breaks, instead of the 15 years provided by the KOZ program. Under the local program, businesses are exempt from local taxes on construction and building improvements, but are still liable for property and other taxes. The program would give Shell some exemptions and allow Potter Township to collect taxes from the company.

The local economic program would also give Potter Township more control. Before Shell could receive the local tax breaks, the company would have to file an application with the township, which would have to hold at least one public hearing before making a decision. Residents could ask questions about the economic and environmental impacts of the plant.

The Senate’s move to expand the KOZ, and the political hoopla around Shell choosing Pennsylvania, leaves Potter Township as the final stop in securing Shell’s move to the state. This essentially turns the normal KOZ designation process on its head.

“The KOZ is a location-by-location idea,” he said. “We passed this bill to put a process in place for the expansion of all the zones.”

Solobay said he didn’t know the site for the Shell plant already had a local tax designation that would be more beneficial to Potter Township. Nonetheless, he said, passing the KOZ expansion bill was the right thing to do.

“It’s true that things don’t always get followed through the way they should,” he said. “But you try to make the best decision. The voters put their trust in us to make the best opportunities possible.”

Solobay says that Potter Township can still weigh in on the deal.

“None of the (expanded) KOZs have been approved yet,” Solobay said. “Shell hasn’t been guaranteed the site. There are still some steps that have to be taken before the area is officially considered a KOZ.”

Corbett signed the bill in February.  A month later, Shell announced it had chosen  Pennsylvania for its new plant. State officials insist the the bill was not passed for Shell’s sake.

Corbett’s office referred questions about the process to the state’s economic development office.

“The bill wasn’t just about one company,” said Steve Kratz, spokesman for the Pennsylvania Department of Community and Economic Development. “The zones were set to expire, and because it has been such a successful program in creating jobs, we wanted to expand them. The bill creates the zones, but they still have to go through the KOZ process.”

Potter Township could still halt the process by refusing to approve the local tax breaks. Matsco and the other township supervisors could simply withhold their approval, perhaps opting to keep the LERTA designation for the property.

Kratz would not comment on how that could affect the Shell deal. “That’s a speculative question,” he said.

Meanwhile, Shell’s commitment is not final, either. The company has the first option to purchase the Potter Township property until the end of 2012. But within that time it could also decide not to buy the property after all.

Corbett is trying to make sure that doesn’t happen.

In June, he asked the state legislature to approve 25 years’ worth of tax incentives totaling $1.65 billion for Shell.

But Potter Township officials are under pressure to swallow their objections and their town’s likely losses as state officials publicly welcome the jobs.

The number of jobs Shell may bring is in flux depending on who is talking about them. The company is only required to employ 400 to get the KOZ tax breaks. The American Chemistry Council, of which Shell is a member, conducted a study showing 17,500 jobs coming from the plant’s presence in Pennsylvania. Included in the numbers are jobs expected to come from new businesses sprouting up around the plant and from temporary construction jobs to build it.

“That 17,000 number is laughable,” said Greg Leroy of Good Jobs First, a group that is often critical of tax incentives. “Unless there is a whole raft of companies coming that will be using a lot of ethylene.”

He added that analysis of previous tax break deals show that, at best, a company will bring 1.5 jobs for each directly hired worker. Under that formula, if Shell hires the 400 people it is required to, there may be an additional 600 jobs.

“And Shell likely won’t be held to hiring only people from Pennsylvania,” LeRoy added. “Given the location of this plant, you have to assume that many of the job takers will be from Ohio and West Virginia. People will come a long way for jobs that good.”

The pressure for Potter Township to rubber stamp the tax exemptions became particularly acute after county officials met with Shell earlier this year.

“We were interviewed by advance teams and site location teams,” said Beaver County Commissioner Dennis Nichols. “We lobbied to expand the KOZ because, from our point of view, the number of jobs will increase, the land value will increase and then there’s the multiplier effect -- secondary and ancillary businesses like restaurants.”

Shell finally met with Matsco and other township officials in April.

“It was absolutely positive and we were gratified by that,” said Matsco. “This is the first time we felt we were being heard. Shell did not come to the table to make promises, but they did hear our concerns. I don’t hold Shell responsible for the other levels of government passing us by.”

As she and other township officials prepared for a June tour of Shell’s Louisiana processing plant, Matsco suggested that there may be other ways for Potter Township to get funding for its fire department and infrastructure needs, but it’s important not to upset the process.

“It would put the project in jeopardy if we asked for something at the local level that hadn’t been determined by the state,” she said. “But it’s possible to get grantmakers to help, or we can ask Shell for additional help. Why not expect it to be positive?  We’ve not seen anything that would tell us otherwise.”