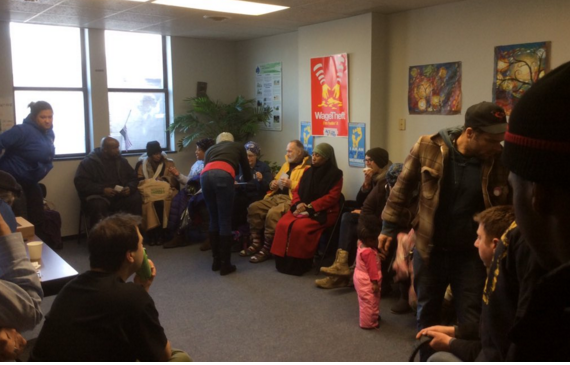 Derek Fuller was planning to be angry when he gathered with neighbors at his apartment complex Friday morning.

The 55-year-old veteran was supposed to be protesting the first round of evictions from the Penn Plaza low-income apartment buildings in East Liberty where he lives.

Action United said in a press release that the reason for the last-minute postponement was that negotiations between residents, the city and LG Realty have reached a “critical juncture.”

McNulty confirmed that the negotiations were between LG Realty lawyer Jonathan Kamin, relocation experts from the Neighborhood Allies group, the city and the Penn Plaza tenant council.

LG Realty referred all questions about negotiations to Kamin, who was not available for comment in time for publication Friday.

Bartlett said the protest’s primary goal was met before it even began.

“The purpose of the action was to cause negotiations,” Bartlett said, speaking from Penn Plaza Apartments as negotiations went on between lawyers and city officials elsewhere. “We won before the action occurred.”

The Gumberg family, who owns LG Realty, doled out 90-day eviction notices to hundreds of residents in its apartment complex in July 2015. Mayor Bill Peduto’s office responded by negotiating a 60-day stay on the evictions, and granting some residents up to $1,600 in moving fees.

As of this week, according to Bartlett, around 25 to 29 families remain in the apartment complex at 5704 Penn Ave. They are due to move out by Feb. 28, but 15 of those families, he said, are in “dire situations,” with nowhere else to go.

Bartlett said the optimal solution for residents of Penn Plaza is that they be allowed to move into roughly 50 available units at 5600 Penn Ave. — another complex within Penn Plaza whose residents have a year before eviction.

The original agreement between the city and LG Realty from September 2015 was that a minimum of 20 units would be available in 5600 Penn Plaza for residents who needed to relocate from 5704.

“The wording and the spirit of that clause [was that] was a starting point,” Bartlett said. “There’s about 50 empty apartments available, there’s 15 families...I think there’s a workable solution.”

There isn’t a set timeline, but Bartlett said he’s expecting the negotiations to finish by the end of the day Monday.

Fuller, a resident of 5704 Penn Plaza since 2013, began the day ready to protest, but ended up signing a lease on what he called a “substandard” apartment in Homewood. He ran into a landlord from Homewood across the street at McDonald’s and started talking about his situation.

Fuller will be moving twice in the next two months — he’s also scheduled to move in April into supported housing that is currently under construction on the corner of Penn Avenue and Matilda Avenue.

“So I’m not homeless, but I am definitely moving down,” Fuller said. Coming from Penn Hills, Fuller’s location in East Liberty put him within walking distance of a grocery store. “There’s not a can in my apartment. I’m eating fresh food for the first time.”

LG Realty’s original plans for the Penn Plaza Apartment, according to the Pittsburgh Business Times, were to transform the property into “a dense mix of commercial and residential uses.”

In a presentation last October for the Pittsburgh Planning Commission, Kamin indicated that the project would be similar to what the architectural firm hired for Penn Plaza has done elsewhere in the country, building residential units on top of retail outlets. He said the evictions were not unexpected.

“The process that we’ve gone through started years ago,” Kamin told the Pittsburgh Business Times. “We began taking units off line several years ago.”

Residents of Penn Plaza formed a tenant committee and began negotiating with the Gumberg family, backed by advocacy groups like Action United and Neighborhood Allies. But despite efforts by the city and residents, redevelopment rolled on.

Pittsburgh’s affordable housing crisis — which Peduto has promised to tackle — has been spotlighted by this debacle. Residents pushed out of affordable housing by private development haven’t been able to find available low-income housing elsewhere without jumping on a years-long wait list.

In the meantime, without further negotiations or a stable living situation, Fuller said he’s just been angry, and hasn’t known where to direct it.

“People are afraid, you can feel it,” Fuller said of his neighbors facing eviction. “I may not own the land, but I can’t live without it.”