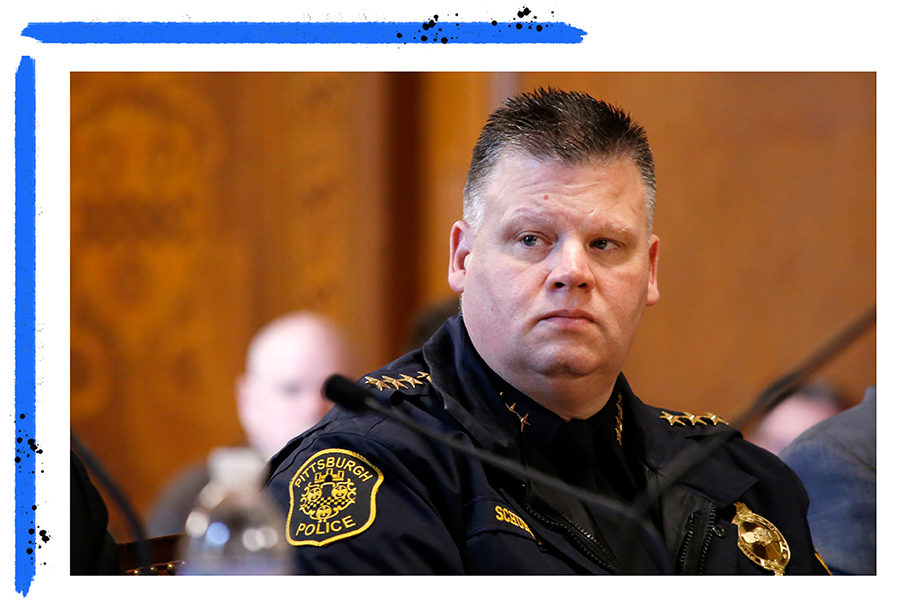 Pittsburgh Police Chief Scott Schubert made the rounds to city council members last week to ease concerns over a proposed half-million dollar allocation to B-Three Solutions, a software contractor one of his officers raised concerns about in a recent whistleblower lawsuit.

In multiple meetings, Schubert — as well as Grant Gittlen, the Community and Government Affairs officer for Mayor Bill Peduto — stressed the need to fund the vital public safety systems that officers rely on to file crime reports and capture data. While members of Peduto’s administration routinely meet with council members, these meetings come as serious concerns have been raised about B-Three’s work for the city.

Council has been presented with a choice: Approve $572,640 to keep B-Three Solutions maintaining its products for two years or hobble the police bureau by blocking the funds to maintain software the city is ill-equipped to handle itself.

“I feel like if we voted no, I don’t know the consequences and the full impact of those consequences to public safety,” said Councilwoman Theresa Kail-Smith after Tuesday’s city council meeting.

Other members shared similar concerns and at least one council member indicated that next week’s discussion on the legislation would be extensive.

"...You’d better have someone at the table who can speak to how you use it and why it’s important."

Peduto’s spokesman, Tim McNulty, provided PublicSource with a list of 46 B-Three projects, many of which involve the police bureau, that will be included in the support contract. How much money would be diverted to each of the projects was not available.

Councilwoman Deb Gross, who said she saw the list of B-Three projects when she met with Gittlen last week, brought up one line item in particular: a project related to “panhandling” in the city. (The city’s list does not define its purpose.) Gross was skeptical.

“I said, ‘Seriously? There’s an entire software module [for panhandlers]?’ I doubt it. I’d like to see it. Can you demonstrate it while you’re at the table?” she recalled asking. Gross said she told Gittlen to prepare for tough questions from council next week when the funding bill comes up for discussion. “I said, ‘You better be prepared to answer questions like that. Really, is this a module that you all use? And you’d better have someone at the table who can speak to how you use it and why it’s important.’”

After meeting with Schubert last week, Councilman Corey O’Connor said he got the impression that if the funding was not approved, “our systems are going to be in a lot of trouble.”

Councilman R. Daniel Lavelle, who represents Downtown and the Hill District, seemed to have his mind made up after meeting with Schubert last week.

“If we were not to approve this contract, then the infrastructure that needs to continue to be built out for our Public Safety department would go away and that is, first and foremost, most paramount,” Lavelle said.

Kail-Smith said she worries that B-Three has been given so much work for the city that it essentially has a monopoly on Public Safety projects, making it difficult for other companies to be brought in as alternatives.

B-Three funds were part of another council action Tuesday. Although B-Three’s name was not mentioned in the legislation, the Peduto administration requested to reallocate $61,000 left over from a B-Three project called the Daily Activity Sheet to a street paving fund.

The Daily Activity Sheet project, required by a 2011 statute, was commissioned to cut down on paperwork by automating forms that officers are required to fill out on how they spend their time each shift. The recent lawsuit alleges that the project was not completed. At last week’s standing committee meeting, the city’s Budget Director Jen Presutti said the police bureau gave assurances that B-Three’s work has been finished, though there are “a few invoices hanging out there.”

City payment records show the Daily Activity Sheet project was fully paid for in October 2015. Presutti told council last week that it would be implemented this year.

Presutti could not be reached on Tuesday to discuss the cost and functionality of the Daily Activity Sheet.

B-Three President Michael Walton said last month that his company completed the work it had been asked to do. He blamed the city for not implementing projects. Walton was not available at his office on Tuesday afternoon and did not respond to an email seeking comment as of publication time.

Kail-Smith voted against the bill to reallocate the funds because she had unresolved concerns about B-Three projects. Gross and Councilwoman Darlene Harris abstained from voting on it.

Since November 2015, B-Three’s work has been at the heart of a internal scandal. Then-police chief Cameron McLay brought concerns related to B-Three’s software work to the FBI and initiated an internal probe, first reported by PublicSource last month. The FBI confirmed to PublicSource in February that it was not currently investigating the matter. However, two city agencies continue to look into it.

Council members were largely kept in the dark until last month when patrol officer Souroth Chatterji’s filed a lawsuit against the city and a top Public Safety official. The lawsuit chronicles what he describes as “waste and wrongdoing” in the city’s handling of software projects involving B-Three.

For roughly a decade, B-Three has been the police bureau’s go-to software contractor, which Chatterji claims included projects that were not finished and others that were more expensive and less effective than similar products from other companies.

The city has not answered the lawsuit yet. But in January, Peduto told PublicSource that he had concerns about B-Three’s work and cast problems with police technology as relics of the administration of Mayor Luke Ravenstahl.

Despite the mayor’s reservations, the bill introduced Tuesday would allow B-Three to be paid up to $367,320 from the Department of Innovation & Performance’s professional services fund for 2018 and $205,320 from that account for 2019.

This bill is remarkable because it’s the first piece of legislation that both explicitly names B-Three and allocates a large sum to the company’s projects. When council authorized large amounts of funding to B-Three projects in the past, the company was never named in the paperwork. The company’s name appears twice previously, for much smaller sums of money, in council’s online archive of bills.

In the past, funding for B-Three cleared council with little scrutiny, and some members struggled to even recall the company’s name before the lawsuit was filed on Feb. 14.

The council will discuss the bill next week and give a final vote at a later council meeting.

The bill was originally scheduled to be introduced a week ago but was delayed due to a scheduling issue and because some council members had concerns about using B-Three in light of the recent allegations.

Moira Kaleida, chief of staff for councilman Anthony Coghill, said Schubert also spoke with her and the councilman last week to rally support for the bill.

"The concern is that if the contract was discontinued outright they would lose access to a lot systems that we need," Kaleida said. She interpreted Schubert’s view as the city needing to be “weaned off B-Three."

Public Safety spokeswoman Alicia George referred questions to McNulty. He said, “It is common for department and bureau leaders to proactively meet with council members regarding pending legislation, as Chief Schubert did in this case. We don't discuss these private meetings.”